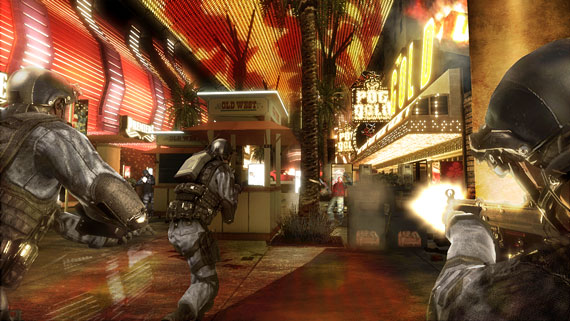 Parents should be on the lookout for some strong language and a fair amount of blood. The game has a gritty, realistic look to it and there are plenty of f-bombs.

PC gamers who were fans of the original Rainbow Six games may be disappointed, as I was, at the more arcardey direction Ubisoft is taking with the series. I highly recommend SWAT 4 Gold, which has both SWAT 4 and its expansion pack—it's a fantastic game that does all the things that Rainbow Six Vegas should have done, and then some.

Console gamers who enjoyed the previous Rainbow Six console editions should be pleased with Vegas. It's worlds better than Lockdown, and outdoes Rainbow Six 3 in most respects.

Deaf and Hard of Hearing gamers will have difficulty with frequent plot developments and audio cues. Audio plays a prominent role in the game, and there are no subtitles for the dialogue.

Hey there. I’m not the author of the piece, but I wanted to chip in and let you know that we do strive to include D/HH info for every game we review. please let us know if you have any more feedback, and let your friends know that it’s here! = )

Wow, thanks for this “Deaf and Hard of Hearing gamers” section that is added to the consumer guide. I’m deaf myself and was thinking of this game but now I see that there are not any subtitles. Thank you so much for considering us deafies!