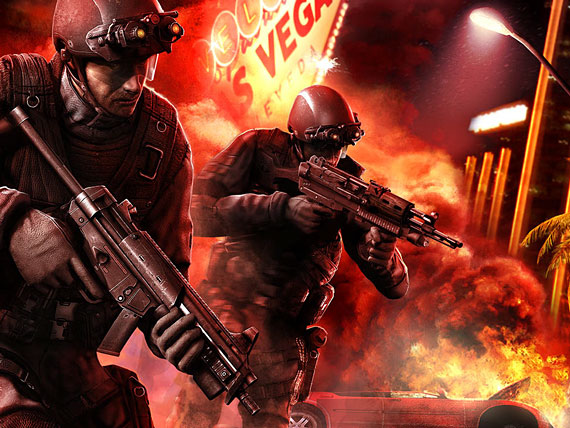 I had just about given up hope in the‭ ‬Rainbow Six franchise after last year's remarkably awful‭ ‬Rainbow Six:‭ ‬Lockdown.‭ ‬It totally abandoned all the core elements that made the series famous,‭ ‬and turned it into a cliché arcade-style shooter with a modest sprinkling of watered-down tactical elements.‭ ‬When I heard about‭ ‬Rainbow Six Vegas,‭ ‬I was justifiably skeptical.‭ Apparently publishers have decided that console gamers can't handle real simulation and strategy, so games have to be dumbed down to reach the broadest possible audience. Fortunately Rainbow Six Vegas is not the bust that Lockdown was; in some ways, it really pulls the franchise back on track and introduces some decent new mechanics. Unfortunately though, it strays very, very far from the series' roots. I hate to say it, but at this point it looks like the tactical action game that PC gamers knew and loved is gone for good, swallowed up by the mass-market needs of developing for consoles.

The run-and-gun style of Lockdown is gone, as are its clunky, unsightly interface and stripped-down tactical options. There is a decent range of commands here, the only notable absences being the helpful "Zulu" command, the ability to toggle "clear" from the command list, and the ability to order the supporting team to toss a frag, flash, or smoke grenade to a specific target. But those are pretty minor quibbles because overall, the squad commands have a level of depth that's on par with any of the other games in the series. 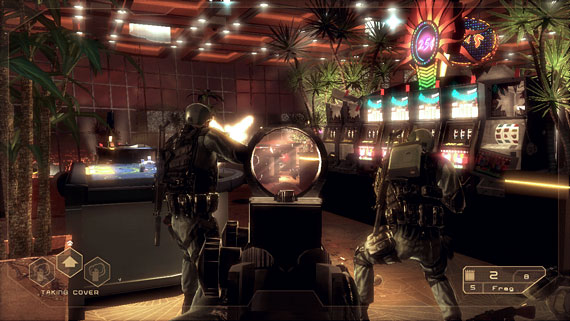 Players take the control of "Logan", a spec ops soldier whose fortunes take a turn for the worse in a botched mission in Mexico City. Wait, Mexico City? Tom Clancy? Haven't we done this before? The opening mission certainly bears an uncanny similarity to the setting of Ghost Recon: Advanced Warfighter, but the plot quickly finds Logan dispatching heavily armed mercenary types under the lustrous neon glow of Las Vegas as the city comes under siege by a veritable army of well-equipped mercenaries. Logan's teammates have their own names and distinct personalities as well, and there's definitely a sense that the plot has more characterization and cohesiveness than previous games. It's ultimately another attempt to make the previously drab Rainbow Six motif a little more cinematic and colorful. That's not inherently a bad thing; however, in order to maintain continuity in the plot, a few logical liberties had to be taken in the gameplay, and I'm not sure the game is better for it.

In the old Rainbow Six games, all the characters were anonymous and expendable (oh, and, there were actually six of them). Apparently though, Ubisoft felt the series should be more like a Michael Bay flick and less like a Tom Clancy novel. When a supporting character goes down, Logan has a couple of minutes to inject him with a magic health serum that gets them back on their feet. The concept would work well in a lot of shooters, but it doesn't work well in the Rainbow Six series, which is presumably replicating some degree of realism. The health system has received an overhaul as well; it now closely resembles the health meter in Call of Duty 2, in which the screen blurs and distorts as Logan takes more damage, then returns to normal if he manages not to get hit for a few moments. There's an entertaining visual effect, but unfortunately the new health system feels really out of place. Developers cannot seem to decide if they want Rainbow Six to be a true tactical sim or a run-and-gun shooter with tactical elements, and Vegas ends up covering an awkward middle ground. 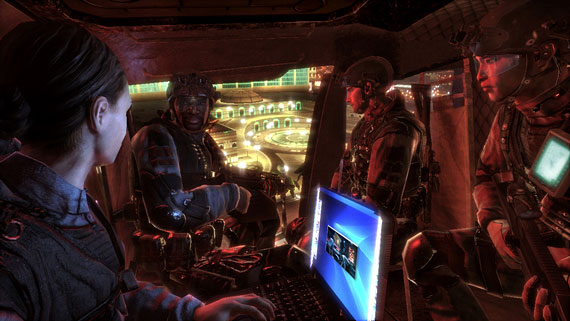 The levels are linear, but they're more open and less restrictive than the levels in Lockdown. There are often multiple entry points, some of which include some flashy gameplay elements like smashing through windows or dropping from the rooftops using the "quick rope" to crash a mercenary party. There's only one problem with the level design: the glaring omission of a quick save. In fact, so glaring is this omission that it leaves some portions of the game virtually unplayable. Checkpoints are too infrequent, leaving it necessary to play large portions of the game repeatedly—and that's with the difficulty on "normal." Set it to "realistic" and the game quickly becomes exasperatingly frustrating. The "Terrorist Hunt" mode in particular has degenerated into an exasperating exercise in luck due to this omission. In this mode, players tackle levels single-handedly, and the levels are opened up a bit into sprawling deathmatch-style killing fields. Since there is no quick save, a good half-hour game can come to a screeching and unexpected halt when an enemy comes out of nowhere and fires a fatal shot in a fraction of a second before the player even has a chance to spot him.

If it sounds like I'm being hard on the game, allow me to reiterate that it is not a bad game; Ubisoft has created a good, divertive action game that has some solid tactical elements. What this also means, however, is that the torch of tactical realism has been passed on to other games. Last year's SWAT 4 in particular stands out in my mind as the game that Rainbow Six Vegas should have been. Ultimately I feel as though Ubisoft underestimates their audience. The originals garnered a strong fan base, and now Ubisoft has decided that those fans aren't quite so important; the game just has to reach as broad an audience as possible. I for one think console gamers can handle a real tactical sim, but I suppose that in this increasingly competitive industry, taking even the slightest risk has become passe. Rating: 6 out of 10

Minor correction, Rainbow 6 is the leader of rainbow, not the number of troops you fielded. You were never limited to 6 troops in the old games, it was 8.