Zack Really is a Zero 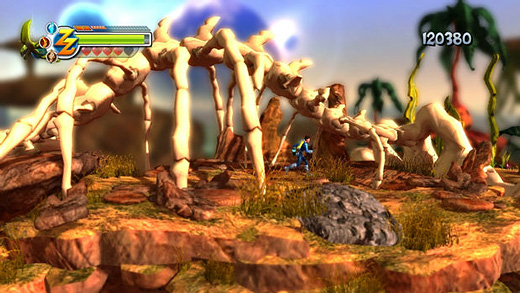 HIGH Some of the quasi-3D graphical effects are interesting.

LOW Repeatedly plummeting to my death because the controls only work some of the time.

It's only the beginning of February, but we've already got a contender for the biggest douchebag game character of 2012: Zack Zero.

Zack, the star of Crocodile Entertainment's PlayStation Network (PSN) exclusive Zack Zero, isn't quite on same unlikeable level as Desmond in Assassin's Creed or Alan Wake, but his doofy character design and the awful story behind his new adventure make it all but impossible to identify with him as anything more than an object worthy of our derision.

It probably wasn't fair to play Zack Zero at the same time I was playing Ubisoft's sublime platformer Rayman: Origins. After all, Origins is one of the better games to emerge in 2011 and a pitch-perfect throwback to the 2D platformers of old. ZZ, meanwhile, is a 2D platformer gussied up for next gen gamers—one that fails miserably in many key areas. Playing Zack Zero after Rayman is not unlike eating filet mignon and then following it up with a plate of wet dog food. That being said, even if I hadn't played Origins, there'd be no mistaking the fact that Zack Zero is largely inept.

I suspected I might be in trouble as soon as the game booted up. The title screen features some decent looking graphics, but there's no sound—no piece of enticing "play me" music to set the tone, no voice saying "Zack Zero!" when I click new game, nothing. It's like Crocodile Entertainment forgot to put a track there or ran out of money or something. It just screams cheap.

This was hardly the last time that sound affected the game experience. For whatever reason (presumably budgetary), Zack Zero chooses to tell its story in a series of still panels. I can live with that, except that there's a narrator reading the story to me over the scenes—and the narrator is absolutely terrible. If Zack Zero's gameplay pales in comparison to Rayman, then its narrator is best described as an incredibly subpar version of a similar character in Bastion. The line readings are laugh out loud terrible at some points, which is partially because the voice actor is so awful, but also because whoever wrote the script clearly wasn't a writer. The story would be judged as light even by NES-era standards and the text is written in an extremely clunky fashion.

However, since classic platformers don't need a great story to succeed, all could be forgiven if Zack Zero offered up some amazing gameplay. Unfortunately, it also fails here.

Zack sports a special suit that allows him to swap between normal, fire, earth and ice modes with a press of the D-pad. He will use these different modes (and his lackluster double jump) to navigate his way through a series of stages that comprise the game. The suit's various modes allow for Zack to solve some simple puzzles, make navigation easier (fire allows for gliding, ice can slow down time, earth can break obstacles), and help in combat. It's an interesting idea in theory, but yet again, the execution comes up short. 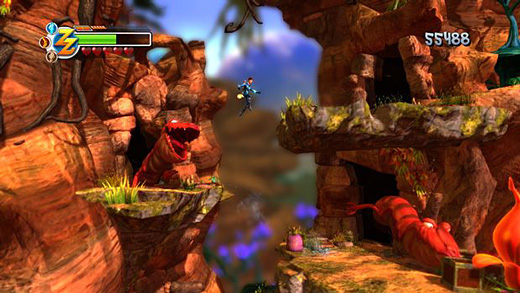 The worst problem is that the game is a 2D platformer, but it loves to present areas where the player can jump into the foreground or background planes. It's a cool mechanic, but it's largely broken. Zack Zero does an atrocious job when it comes to giving the player a hint as to whether or not he can switch planes. Add in finicky controls and it becomes that much more frustrating. I lost count of how many times I stood jumping around like a spaz in order to try to get Zack to switch planes.

As bad as that is, the game gets even more annoying. Sometimes, an object that can damage Zack will also be switching planes—and since the camera is a 2D one, there's an issue of depth perception that makes it far too easy to get hit by something that appears to have already moved out of the way. Because of this, cheap death abounds in the game.

Cheap death also applies to the game's combat, which seems to have been aiming for a Ratchet & Clank style of battle, but manages to fall well short of its inspiration. With no way to block, all combat in Zack Zero revolves around either attacking or jumping. For standard enemies, this isn't bad—but for bosses, it can become a genuine nightmare. Boss battles tend to take place inside arenas where Zack's ability to maneuver is severely curtailed. Bosses will chase the player to the very edge of the screen, making the real estate even smaller, which leads to hundreds of cheap hits. Adding insult to injury is the fact that Zack's hit detection box is all kinds of messed up. Things that aren't particularly close to the player manage to still land, which leads to more death.

Still, the most annoying thing of all is how the game has a tendency to cheat players out of health on boss battles. For example, dying on the game's final boss will lead to a respawn right back in the arena —except that sometimes the boss is still launching the attack that killed Zack on the previous encounter and it hits the player as they respawn before they have a chance to move. Since some of the boss attacks can take two of Zack's five hearts of health (and others even more), this is extremely unfair. In my playthrough, it happened repeatedly—it's not an isolated glitch.

About the only real positive here is that some of the outdoor environment graphics are nice—but even those are quickly countered by the indoor level design, which never deviates from generic caves and sci-fi spaceship corridors. Occasionally there's a neat sort of quasi-3D effect to the visuals, but I'd have gladly done without them for a straightforward gameplay environment.

Finally, the game comes with a really annoying bug that can stop progress completely if gamers don't know how to get around it. Zack Zero loves to be connected to the Internet so it can spam the player with constant updates about how they're doing compared to everyone else who's played the game. However, being connected to the Internet causes Zack Zero to crash—within seconds of starting a game. The way to get around this is to log into the game while signed out of PSN and then sign in when the game prompt comes up. Why has no one fixed this yet with a patch? I've seen at least three other people complaining of the same issue and this solution worked for all of us.

I had high hopes for Zack Zero going in, but the game is too rough and unpolished to recommend it. The dodgy platforming, bland gameplay, and goofy main character are huge detriments to the experience, and the ridiculous ending is like one final slap in the face before gamers go about their life. The end naturally sets up a sequel, but if Crocodile Entertainment doesn't address the serious flaws with this game, another adventure with Zack isn't something I'd wish on my worst enemies. Rating: 3.0 out of 10.


Disclosures: This game was obtained via publisher and reviewed on the PS3. Approximately 8 hours of play was devoted to single-player modes (completed 1 time).

Parents: According to the ESRB, this game contains mild fantasy violence. There's nothing offensive in Zack Zero, so parents shouldn't worry about their kids being scarred for life by the content. The game's frustration factor could upset younger gamers, bot there's really nothing objectionable here in terms of content.