An Old Classic Gets a New Look 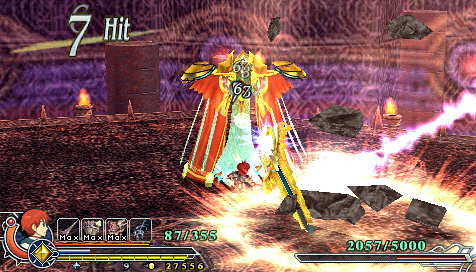 LOW The game is short. I wanted more!

WTF Why is it so damn hard to kill flying enemies?

Seems hard to believe, but American gamers have been blessed with two "new" Ys games this fall— pretty amazing, considering that the Falcom's action RPG franchise has only occasionally washed up on US shores in its history. This is a good thing, though, as it has allowed PSP owners not only the opportunity to play one of the best ARPG franchises that doesn't feature the word Zelda somewhere in the title, but also given Sony fans two good games for their PlayStation Portables.

Publisher XSEED has released not only ginger-headed adventurer Adol Christin's newest adventure this autumn (Ys Seven), but has also taken fans on a stroll down memory lane with an updated version of the Super Nintendo/Genesis/TG-16 game Wanderers from Ys III. From a business standpoint, the idea of releasing both games in such close proximity seems odd, but far be it from me to complain about more Ys.

Retitled Ys: The Oath in Felghana

, the new game is a port of the PC update of Wanderers from Ys III. Players who spent time with the console original will find that the new version is familiar, but has been upgraded so that it plays more like the Ys of recent years and not the earlier incarnations.

Oath once again finds Adol Christin and his pal Dogi thrust into an adventure that involves political intrigue, ancient magic, loads of dungeons, and a quest to save the world. Unlike Ys Seven, Oath often feels like a throwback—eschewing all the gameplay advances of Falcom's most recent title in favor of a more traditional Ys experience. Adol traverses this game alone, which feels strange after spending time with Ys Seven's three man party system. The absence of the roll move (which was great for evading) was a downer as well. That being said, the title may not be as flashy (or as long) as its new big brother, but the streamlined experience does have its benefits. 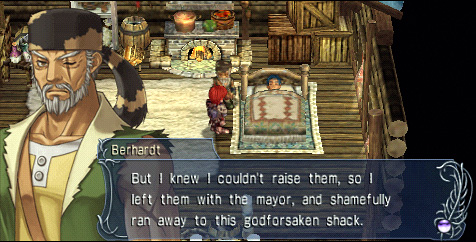 Oath is Ys stripped down to its essence. The story is an afterthought—which was a welcome change after Ys Seven's convoluted attempts at narrative—and the whole experience tends to revolve around killing tough enemies on the way to even tougher bosses. In a nod to the hardcore, Adol isn't allowed to carry any healing items, meaning boss battles are even more nerve-wracking because there's no margin for error. Learning the patterns, proceeding patiently, and choosing when discretion is the better part of valor are keys to winning Oath's big encounters. Players will die on boss fights—sometimes often—but it's never cheap or particularly frustrating. Each encounter provides clues on how to finally succeed, and makes victory taste that much sweeter. Plus, the game has an adjustable difficulty level should things get too hard and players can retry the boss upon death without having to trek back to the lair.

The getting back to basics motif runs through other parts of the game, too. Graphically, Oath in Felghana won't be winning any awards, but the simple presentation is pleasing enough and sure to inspire a sense of nostalgia in anyone who grew up loving the 16-bit RPG era. Ys has developed a very distinctive look over the years, and this title fits in nicely with the more modern versions.

Combat, meanwhile, is a satisfying mixture of hacking and casting, with an emphasis on hacking. The game doesn't offer a lot of weapons or armor, but each upgrade is visible on Adol's character and the new gear generally feels like an improvement over the old. Oath doesn't feature nearly as many things to collect as Seven did, but that's not really a negative. Fighting enemies is genuinely fun, thanks to the responsive controls. The only real issue here is that jumping to attack flying enemies can occasionally be a challenge with the 2D backdrops.

All in all, this review is a lot like Ys: The Oath in Felghana: short and sweet. After spending roughly thirty hours with Ys Seven, Felghana returns to a more standard length. The game can be completed in around 13 hours, depending on the player's skill level, the difficulty setting, and whether or not they veer off the beaten path for goodies. It's a perfect length for a game of this type; long enough to feel epic, but never so long that it outstays its welcome. More games should be aiming for that sweet spot when it comes to length. Ys has always been something a niche franchise—revered by a group of gamers who appreciate it for its old school charm and challenge—and this entry probably won't change that. However, anyone who loves games like Zelda and Alundra would be well advised to give Oath in Felghana

a shot. Falcom isn't trying to reinvent the wheel with these games—they're more interested in refining it to the point where it rolls even more smoothly than before. Rating: 7.5 out of 10.

Shop Ys: The Oath in Felghana at Bizrate

Disclosures: This game was obtained via publisher and reviewed on the PSP. Approximately 13 hours of play was devoted to single-player modes (completed 1 time).

Parents: According to the ESRB, this game contains: blood, fantasy violence, mild language and suggestive themes. The game doesn't do much to earn its Teen rating —sure, it's got a few mild swear words and the ubiquitous "fantasy violence," but the real reason to keep the young 'uns away from this one is because the challenge is likely to aggravate them.

Deaf & Hard of Hearing: Hearing impaired gamers will miss out on the game's score (which is good) and voice acting (not so much…), but the adventure is fully told through text, so that shouldn't be a serious issue.

[quote=Mike Bracken]Ironic, since Zelda is just a clone of Zelda these days. That was pretty meta… I think Napishtim and Ys Seven have been highlights of the series — both were more fun than any of the recent Zelda games to me.[/quote] Zelda has size and breath most action RPGs don’t even try to get to. Sure its not hard to make a better story or dailog, but the mechanics, pacing and general gameplay narrative tend to be better, tho it could be more free roaming. And ya Zelda is not as good as it could be, but as far… Read more »

Ironic, since Zelda is just a clone of Zelda these days. That was pretty meta…

I think Napishtim and Ys Seven have been highlights of the series — both were more fun than any of the recent Zelda games to me.

I loved the Y’s games but oy past 4 or 5 the series like so many has gone down hill.