Adol the Red is Back and This Time He Brought Friends 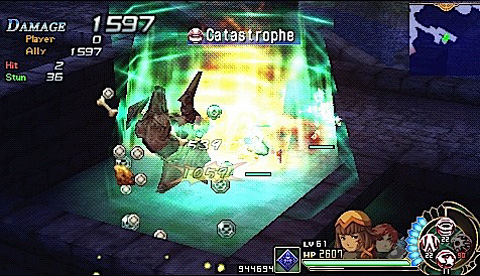 HIGH Bringing down a boss that has over 100K hit points in short order thanks to the fluid and fun combat system.

LOW Whenever the game forces players to stop killing things and advance the uninspired story.

WTF Really? A princess in disguise and a prison scene? Come on, RPG writers…

They say time waits for no man—not even for a cult video game icon like Adol Christin.

Christin, better known as Adol the Red, is the hero of Falcom's Ys (pronounced like "eese" in "geese") series of action role-playing games. Since 1987, titles featuring Adol's exploits have adhered to a fairly standard formula that appeased hardcore fans but did little to broaden the franchise's appeal. 1987 was a long time ago, though, and Falcom has taken it upon themselves to give Ys a bit of a makeover in the newest title, Ys Seven. Are they successful?

Ys Seven made some longtime fans nervous when it was announced because this was the first title built from the ground up for a handheld (Sony's PSP). Seeing an opportunity to expand upon how the Ys games worked, Falcom appears to have approached this latest outing with a "change is good" attitude. There's something to be said for not tinkering with a game that isn't broken in the first place, but in this case Falcom succeeds in actually making the beloved franchise stronger.

At its core, Ys Seven still feels a lot like Zelda. There's a mostly mute, sword-swinging protagonist who lives for adventure and always seems to find himself embroiled in some world-altering event. There are dungeons to explore, monsters to kill, loot to discover and the occasional puzzle to solve. The similarities seem fairly pronounced – and there's nothing wrong with that. People love Zelda and Ys is arguably just as good a series. In fact, I've preferred games like Ys: The Ark of Napishtim and this title over any of the recent Zelda games.

Seven tweaks the formula, but Falcom seems to have a clear understanding of what players love about their games and they're careful to build on that foundation without destroying it in the process. Think of Ys Seven as a cosmetic makeover and not major reconstructive surgery—it's a minor procedure designed to make Adol appear a little fresher; something that works in 2010. In this regard, the game is a complete success. 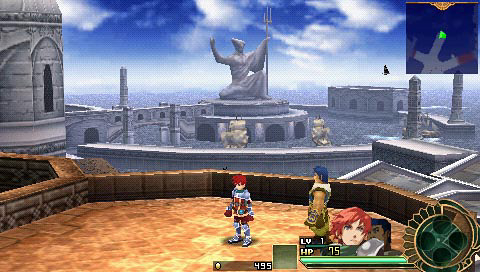 The biggest tweak by far is the one that concerned fans most: the addition of party members. Previous Ys titles had Adol going it alone, so the inclusion of two other active party members seemed like not only a big change, but a risky one as well. Fortunately, Falcom pulled it off.

The party system works well in Ys Seven. Players control one character while the A.I. controls the other two. This could have been a recipe for disaster, but instead becomes one of the game's greatest strengths. The simplistic A.I. does just enough to be helpful without requiring the player to babysit constantly. Hurray for that.

The decision to add these extra characters also adds depth to the gameplay experience. Players can switch between them on the fly (save for boss battles, where options are slightly more limited) and each has a weapon "affinity" that makes mixing and matching members with Adol a vital component for success. These affinities are set up in a sort of "rock, paper, scissors" fashion, where one weapon type is especially useful against an enemy's weakness. This ensures that players don't just build a "dream team" of three characters for the whole game.

The combat is engaging and fun, thanks to the variety of weapons and characters. The controls are spot on, save for the Flash Guard move, which requires players press both shoulder buttons on the PSP at the same time. That wouldn't be an issue, except the left trigger is used for the super-charged extra attack too. This leads to countless instances where players will accidentally discharge the super attack when they didn't intend to. It's a bit frustrating, but the combat is such a blast that most people will forgive this one transgression.

Ys Seven's bigger problem is its story. This is a series that hasn't ever been particularly concerned with advancing the cause of narrative in the Action RPG subgenre, and this entry is no exception. Ys Seven takes a long time to get going because it spends between thirty minutes to an hour just setting up the tale. If the game featured a story that was actually engaging or fresh, this would be acceptable, but since the narrative features a princess in disguise, a stint in jail, and about a hundred other hoary Japanese RPG tropes, the build up doesn't seem justified. Add in unskippable cutscenes and it becomes even more annoying.

Despite these minor miscues, Ys Seven proves that you can tweak a classic game series without ruining it in the process. The lengthy campaign (roughly thirty hours of gameplay with multiple difficulty settings) and smooth combat make the latest Ys highly addictive and one of the better offerings to emerge for Sony's PSP. It seems unlikely that Ys Seven will place the series on the same level as Zelda, but Adol the Red's latest adventure should earn him some new acolytes. Rating: 8.0 out of 10.

Disclosures: This game was obtained via publisher and reviewed on the PSP. Approximately 33 hours of play was devoted to single-player modes (completed 1 time).

Parents: According to the ESRB, this game contains blood, fantasy violence and mild language. Yet another game slapped with a T rating for a few minor curse words. The ESRB seems to be rating strictly these days, because there's really nothing much in Ys Seven that is objectionable, let alone anything that makes it something for kids teen and up.

Deaf & Hard of Hearing: The dialogues is wholly presented in text, so gamers with hearing impairment won't miss out on anything except the musical score and sound effects.

Well, I’ll be damned…you can fast forward through them. I wish I’d known that while I was still playing.

Thanks for the clarification.

While you can’t skip cutscenes altogether, you can fast forward through them by holding the circle button.

Also, Ys Seven was the first game in the series I’ve played. It’s also, without a doubt one of the best games on the PSP.

Seriously y’all, don’t pass this one up.