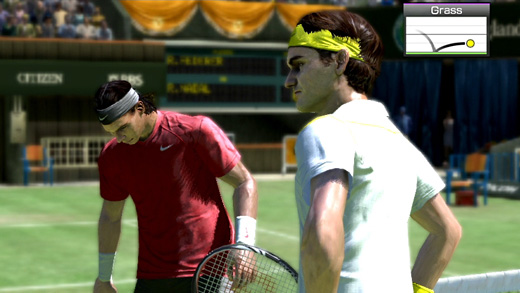 HIGH Working your opponent into a corner and then unleashing an inside out forehand for a winner on match point.

LOW Needing to move one space to enter a tournament and having no one space move vouchers.

WTF Why does Rafael Nadal look like he's sweating milk?

It's been over a decade since Virtua Tennis landed on the Sega Dreamcast—and while Sega's much-loved console has been consigned to the annals of video game history, the game lives on. Things are different in Virtua Tennis 4

(VT4)—the newest installment in the franchise—and yet underneath it all, they're still essentially the same. The names of (some) players have been replaced with a younger generation of talent, but at its core VT4 is still essentially king of the arcade-like tennis experience. Wii Tennis was pretty cool for about ten minutes—but nothing quite compares to ripping a forehand winner down the line with Rafael Nadal.

This latest outing in the series is essentially what VT fans have come to expect—only with some puzzling design decisions that occasionally mar the experience. It's a bit of an odd game, if only because I felt as though I spent far less time playing tennis than I did engaging in mini-games and figuring out how to best use my movement tokens to navigate the map screen. Come on, Sega—I'm Jim Courier, not Vasco de Gama…

Setting the problems aside (for now), VT4 is a mostly fun arcade-styled tennis sim. Players looking for a more realistic tennis experience would be better served by picking up Top Spin, but hackers who just want to run around ripping shots without worrying about hitting balls long or into the net will find that VT4 should fulfill their Wimbledon dreams.

The game is broken up into several modes—including exhibition, which mirrors the original arcade game from 1999, online mode, training modes, and the World Tour. The tour is where players will spend the bulk of their time, building their customized avatar and taking him (or her) across the globe in a quest to become the world's top seed. This is more difficult than it sounds. It's taken me three trips through the world tour mode and I'm still not quite the best in the world. There's definitely some replay value here—even in the single player experience. 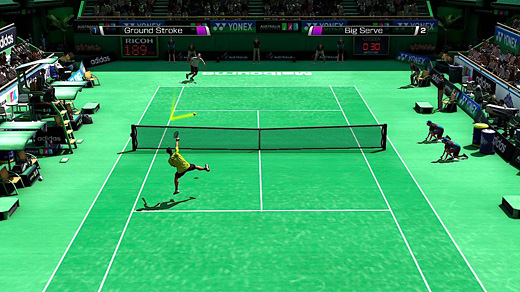 World Tour mode begins with customizing an avatar. Customization options are fairly robust—there are countless sliders that can be tweaked and adjusted to make the onscreen model look handsome or like a hideous Chud who just crawled out of the sewer. Once physical choices are done, the player can then customize the avatar's game. There are choices for forehand swing styles (I went with a loopy semi-western grip forehand, personally—just like real life), to a one or two-handed backhand, to their serve motion. If that weren't enough, players can even personalize their grunt from several different options.

Once all that's done, it's on to the World Tour—which is basically a gigantic map that looks like something out of a board game. Your "coach" will talk to you through text menus—and explain that he'll give you "flight vouchers" so you can travel around. The thing is, Coach is apparently clueless—because he can't actually give you whatever voucher you want. Instead, you get a random voucher each time you use one—which can move the player anywhere from 1-4 spaces on the map. The problem is, if your guy wants to enter a tournament that's one space away and you have a three move voucher, you miss that tournament. Same thing with training sessions. So what's supposed to be a tennis game quickly devolves into an annoying "vacation planner" simulator as you try to figure out where your vouchers will get you and how that might affect the next three turns. This is decidedly un-fun.

But wait, it gets better! Players earn star ranking points for participating in charity events, exhibitions, and tournaments. The medium tournament of each continent and the Grand Slam event require a certain amount of stars to be able to enter. If the player has bad luck with the random movement vouchers, odds are they'll not have enough stars and miss the tournaments. Missing tournaments means missing more stars, which means…well, you get the picture. It's a vicious cycle that the player never really recovers from. That it's almost totally random sucks.

Adding insult to injury is fatigue, which means the player gets tired and needs rest. The only ways to rest are at resorts on the map (more juggling vouchers and trying to figure out how to reach them without missing important events) or "recovery cards," which can be purchased (alongside move vouchers) from, you guessed it, various spots on the map. The kicker here is players can only buy one voucher from each shop—so there's no stocking up. 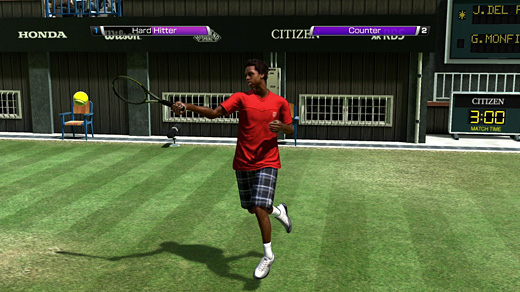 When I did actually get to play tennis, VT4 is essentially just like previous iterations. Playing against the AI is a strange experience—there were times where I'd watch my opponent whiff on balls well within his reach, then in the next game, he'd turn into Pete Sampras. The pros are always more challenging than the generic random guys you meet—and winning a grand slam in the first trip through world tour on anything other than the lowest setting was a challenge.

Other than that, it's basic tennis—with some really long rallies because VT4 doesn't believe in players ever making unforced errors. I had points that lasted for minutes as I continually tried to work my opponent to one side of the court so I could rip a winner, but that can be difficult against the harder challengers.

In terms of presentation, the game is all over the place. The arenas and courts are nice enough, with a decent level of detail. Player models are generally well animated, but Rafael Nadal always looks like he's sweating milk after a 'roid binge in his in-match closeups for some reason. He's very veiny and unnatural looking. It's really quite disturbing. Meanwhile, the map is basically a glorified board game, and your "coach" is just a photo and some text. Would it have killed you to at least let me interact with a character model, Sega—at the very least, give me some voice acting. The game has none of that, save for the person who announces the scores after each point and who wins the game or match.

These elements tend to make VT4 feel cheap. Couple them with the awful navigation system and VT4 is a clear step down from VT3. Xbox 360 owners get the shaft even worse—they don't get the bonus players (Stefan Edberg, Boris Becker, and Pat Rafter) or the two extra mini-games. Thanks for that, Sega! Way to punish half your audience for no apparent reason whatsoever…

At the end of the day, Virtua Tennis 4

is a game that trades largely on its lineage—but given that this game, like VT2009, continues to muck up a really good formula, it's hard to imagine gamers continuing to be forgiving of Sega's recurring missteps. VT has always had a map and training games between tournament matches—and we never want that to change. However, we do want Sega to actually allow us to decide what events we want to participate in and when—without being at the whim of the game's voucher-distributing AI. And while we're at it, maybe you guys could make King and Duke—the two ultimate characters players eventually face in the game—a little less cheap? My broken controllers would appreciate that greatly. Rating: 5.0 out of 10.


Disclosures: This game was obtained via the publisher and reviewed on the Xbox 360. Approximately 12 hours of play was devoted to single-player modes (completed 3 times) and 0 hours of play in multiplayer modes.

Parents: According to the ESRB, this game contains comic mischief. Parents should have no concerns here—it's tennis. The most outrageous moments are when you don a costume for a goofy tournament and can hit balls with a loaf of bread.

Deaf & Hard of Hearing: Hearing impaired gamers won't miss a thing. The only voice acting in the game is the score announcer, and that information can be seen onscreen as well as heard.