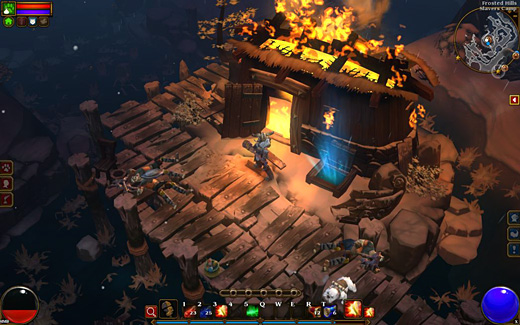 HIGH Finding that final piece of gear that completes a set.

LOW Tossing out the 8 millionth piece of gear your character class can't use.

WTF Did a $20 Diablo II clone really wind up a better game than vaunted Diablo III?

The long-awaited sequel to Runic Games's surprise hit has finally hit retail (after several delays and in the wake of Blizzard's highly anticipated Diablo III) and the wait was worth it. Gamers who love clicking their mouse repeatedly to slay hordes of nasty monsters while uncovering mountains of glorious loot just might have found their game of the year.

Players enter the top-down fray with four character options—the brutal Berserker, explosive Embermage, gun-slinging Outlander, and tank-like Engineer. Each class is customizable, with a male and female option as well as various face and hair configurations.

Once players have crafted their character and spent some time in the world, it's clear that Torchlight II is an overwhelming success. One huge reason? This game makes it rain loot constantly, and that scratches one of my favorite gaming itches. Sure, lots of gear dropped is useless (particularly as the player starts to assemble a good set of armor and weapons), but the thrill of the next super-awesome item potentially being dropped by an upcoming boss will keep gamers marching forward for weeks on end. This mechanic may not be anything new, but the ever-present potential of new and better items has kept gamers clicking mouse buttons for years. It's hard to argue with psychology.

Apart from the loot, Torchlight II keeps players happily on the treadmill in other ways. One of the biggest complaints leveled against the original was that it was a single-player experience, and Runic has fixed that. Torchlight II offers not only online play with friends and strangers, but also has a LAN function as well. No more going it alone unless a player chooses to do so. The ability to loot with friends (and strangers) certainly makes return runs through the game more enticing than they were on the first go-round. 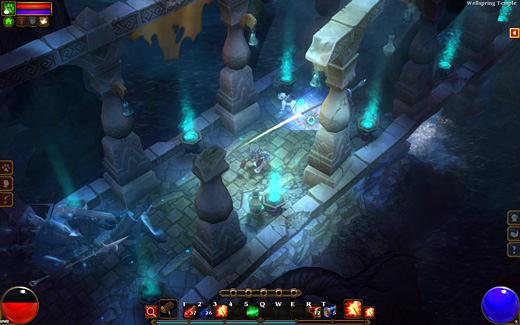 The character customization (in the form of skill trees) is also a plus, allowing players to unlock new moves or passive traits as they level up. One playthrough is not nearly enough to unlock everything, meaning players will have to think long and hard about how they spend those precious points. This becomes even more apparent once they realize that going back to a trainer only allows the previous three points to be reset. That's right—there's no resetting every point for a new build. Players are stuck with what they pick as the game advances, and I like it—it makes leveling up feel far more important than it does in other games.

If that isn't enough, there's also the title's New Game + mode (which allows players to start a new game after completing the first run with their levels, gear, and skills intact) multiple difficulty settings including "die once and it's forever" Hardcore mode, and yes, the allure of even more loot.

Have I mentioned the loot?

Exploring the landscape and slaughtering minions is as simple as it ever was, thanks to Torchlight II's simple mouse-based control scheme. The mouse does everything – moving and fighting. It's a bit puzzling as to why there's not an option for WASD movement in the game, but the mouse setup worked fluidly. I would have loved to see a controller option (particularly since the controller worked so flawlessly on the Xbox 360 version of Torchlight), but someone at Runic decided the mouse was the only way to go. Other options would be good, but at least this method works well.

It's hard to find things to complain about with Torchlight II—it's a rich and lengthy experience that's incredibly polished and fun to play. There are some minor bugs that turn up from time to time in the online mode, but none of them marred the overall game. The whole package becomes even more impressive when the $19.99 price tag is factored in. This is a full-length and full-featured title for a fraction of the cost of today's standard console and PC releases. Sure, it might not reinvent the wheel as built by Diablo II over a decade ago, but Runic deserves props for perfectly recreating the formula. Many others have tried to bring their own take on Diablo to the market—and failed. Runic didn't, which makes Torchlight II an essential purchase for anyone who loves to crawl through dungeons while scoring phat loot. Rating: 9.0 out of 10.


Disclosures: This game was obtained via the publisher and reviewed on the PC. Approximately 50 hours of play was devoted to single-player modes (completed 1 time so far…) and five hours of play in multiplayer modes.

Parents: According to the ESRB, this game contains nothing—because it hasn't been rated by the ESRB for some reason. Torchlight II might not have an official rating, but it's an Everyone 10+ by my estimation. There's nothing particularly offensive here. There's fantasy violence and that's pretty much it for objectionable material.

Deaf & Hard of Hearing: Torchlight II features a subtitle option for the cut-scenes so it's possible to keep up with the story. Various exclamations in battle are not subtitled.