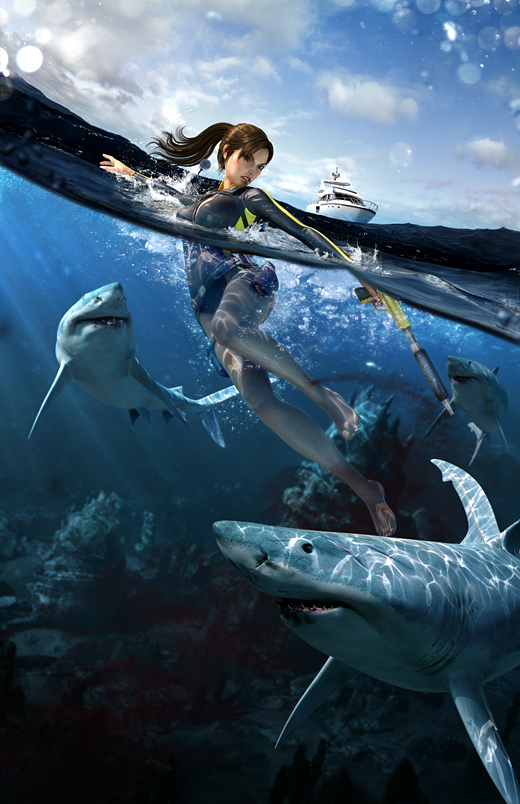 I find it amazing that Tomb Raider's Lara Croft has become such a gaming icon. Sure, the first game was pretty impressive for its time, but it never struck me as the kind of thing that would not only generate countless sequels, but big budgeted films and pop culture credibility. Lara and her heaving rack may not be as recognizable as Mario, but let's face it—even non-gamers know who she is. What boggles the mind about this strange turn of events is that once you get past that first Tomb Raider title, the majority of the series' entries have been lackluster affairs at best or buggy unplayable crap at the worst. Things did take a turn for the better with Tomb Raider: Legends (wherein Crystal Dynamics took over the development duties), but should two good outings in roughly a decade equate to cult icon status? Apparently so, as Lara's back for yet another globe-trotting adventure in Tomb Raider: Underworld.

Underworld, Crystal Dynamics's third stab at the franchise, is a step in the right direction. There are elements to this title that are genuinely well-conceived and design decisions that are not only well-implemented but also breathtaking to behold. Yet, for each thing Underworld gets right, it often feels like there are at least two ugly problems that have plagued the franchise since its early days still rearing their heads. Hoping that maybe after all these years the games would finally resolve these issues once and for all seems to be asking for more than Crystal Dynamics can deliver. Because of this, Underworld shines as one of the better Tomb Raider games to come along—but that's essentially damning it with the faintest of praise.

This time out, Lara's working to find out what happened to her missing mother and what secret her dead father was hiding when he perished. An early sojourn to an underwater temple reveals that the elder Croft was investigating some heavy Norse mythology—and that he may have been on the track to uncovering Mjolnir, Thor's legendary hammer. Discovering this information sets Lara off on another series of quests that culminate in the exploration (and plundering) of countless tombs and temples before reaching a climax that should satisfy everyone who's been following the narrative arc of the past games. The scripting is one of the better elements of the Underworld experience. The story isn't deep, but it is far more nuanced and polished than what I'd personally come to expect from Lara's earlier adventures. Underworld feels like a game made for the fans—it ties up loose plot ends (while still managing to pull more from the fabric to drive a sequel) and brings closure to several of the chapters of Lara's existence. Underworld may be for the hardcore Tomb Raider fan, yet it remains accessible enough so that anyone who missed out on Legend and the earlier titles can hop right in and get up to speed quickly. 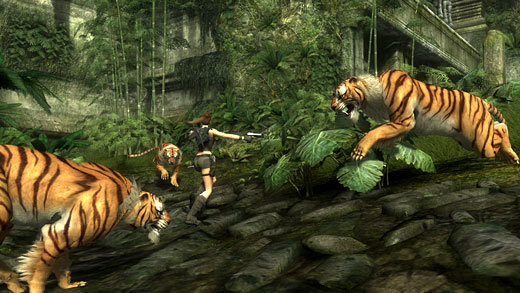 Underworld doles out this story in bite-sized chunks, interspersed between long periods of climbing and exploration. Tomb Raider is an action game franchise at heart, but this particular entry feels an awful lot like a puzzle game. Players will often find themselves plopped down into a giant room with multiple objectives to complete in order to advance. There's a certain degree of non-linearity in that the player can tackle any of these objectives in the order they see fit. The puzzle elements come into play when considering how to achieve these differing goals, and the climbing and acrobatic maneuvers required to pull them off. Lara is as lithe and nimble as ever (maybe even moreso thanks to the inclusion of some new moves in her standard repertoire) which is essential because she'll be hopping from one ledge to another, clinging by her fingertips, pulling herself up various handholds, and navigating a seemingly endless series of pitfalls where one wrong step equals instant death.

She does this in some elaborately crafted and mesmerizingly beautiful environments. Underworld isn't the pinnacle of the 360's graphical prowess, but that doesn't make it any less pretty to look at. Whether exploring ruins on the coast of Thailand or jumping through an ancient temple in the Arctic Ocean, the locales of Tomb Raider are as exotic as they've ever been. There were times during the game where I simply stopped what I was doing in order to soak in the scenery, and other times where I tried to climb to areas well off the beaten path in order to see the view.

That being said, the nice graphics and intriguing storyline presentation can't make up for the game's many technical shortcomings.

The most grievous problem with Underworld revolves around the game's camera. This has been an issue in almost every Tomb Raider game to date, but the camera in Underworld is so bad that it actually feels like a giant step backward in the evolution of cameras in 3D games. The core of the Tomb Raider experience is exploration that revolves around climbing, jumping, and finding a path to safety well above the ground. Unfortunately, Underworld wants players to do this blindly about 95% of the time. The camera is like a willful child for most of the game, fighting the player's every attempt to position it where it needs to be. It moves on its own, refuses to stay where it's been positioned, and gets caught on environmental objects with a frightening amount of regularity. Aside from not staying where the player puts it, the camera has an aggravating tendency to simply refuse to be positioned in certain situations. This is a pretty big deal under the best of circumstances, but becomes even more troublesome when one is trying to make a jump across a room and the camera won't even let the player see what they're jumping towards. This happens in nearly every room of the game. Players are repeatedly forced into making blind "leaps of faith" because the camera simply refuses to move to anywhere even close to where it needs to be for seeing. Cheap death abounds in Underworld because of this. Impatient and easily aggravated gamers will undoubtedly chuck controllers in frustration. 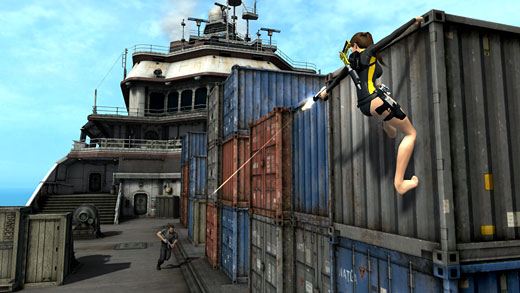 The game's other major shortcoming is that while the controls feel tight and responsive most of the time, there are instances where they fail to perform adequately. I lost count of the number of times I got Lara stuck in a loop of spastic movements because the controls couldn't figure out how to contextually respond to the environment. Add in a bazillion deaths because Lara didn't respond to the button presses I'd issued and the frustration factor goes up almost exponentially.

These things, coupled with an alarming number of bugs and glitches (getting caught on objects in the environment, clipping through enemies, clipping through the occasional pillar or pile of rubble and winding up inside of it when I'm clearly not supposed to be there…) mar what is an otherwise engaging action game. It's a shame that these problems (and that's not even mentioning a few of the game-breaking bugs that were reported right after the title's release—I was lucky enough to not encounter any of those) are still present in Tomb Raider games, when similar titles like Uncharted have managed to address most of them in a more satisfying manner.

Despite my complaining, I still had some fun with Tomb Raider: Underworld. I think Crystal Dynamics is the developer to finally fix these games once and for all, but I'd like to see more progress being made toward addressing the core (and recurring) issues in the game in the next iteration. The experience is a give and take: you'll certainly take some enjoyment out of Lara's latest adventure, but the game will give you unnecessary grief almost every step of the way. Rating: 6.0 out of 10.


Disclosures: This game was obtained via publisher and reviewed on the Xbox 360. Approximately 25 hours of play was devoted to single-player modes (completed once).

Deaf & Hard of Hearing: Tomb Raider: Underworld does feature a subtitle option (available in the options menu). This makes understanding the story easy enough, but doesn't address every issue a hearing-impaired gamer might encounter. Underworld gives gamers a little audio cue (in the form of a chime) when they've moved in the right direction. The game's subtitling doesn't acknowledge this sound effect. It's not a game-breaker, but given the open-ended approach of the game, hearing the chime can save players from wasting time barking up the wrong pillar.