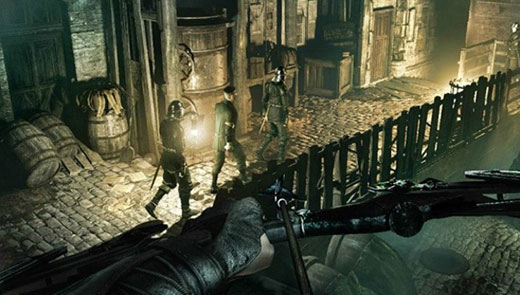 HIGH There's satisfaction to be had in completing a mission without being spotted.

LOW Constantly hitting dead ends as I tried to get from point A to point B.

WTF Garrett is a master thief who can climb walls and towers, but he can't jump over a three foot pressure plate?

I'm crawling through one of Thief

's seemingly endless series gloomy alleys, trying to make my way past six guards, when two thoughts occur to me:

1>"This game's map is total bullshit"

2>"Dishonored did all of this better."

These two thoughts re-emerged many times during the 21 hours it took me to roll credits on Eidos Montreal's new stealth game, an exercise so pedestrian in its mechanics and presentation and so nonsensical in its story, that it's easy to see why so many folks have found it disappointing.

Given that I thought Eidos Montreal's Deus Ex: Human Revolution was mostly a disaster, I'm not sure why I'd have expected the studio to take another beloved franchise from the past and make it relevant again. In fact, the fingerprints of Deus Ex are all over the latest Thief to the point that I started calling it Deus Ex: Medieval Revolution. It's hilarious to note that the endless series of ventilation ducts I railed about in Human Revolution have been recycled into what appears to be the Middle Ages. Even more thrilling is that Deus Ex's penchant for making the player read pages of ridiculously boring information in hopes of finding a code to unlock something has also returned-only now the info is found on notes and ledgers, and not in email.

ProTip: If you've got valuables hidden in a locked safe, you might not want to leave a lengthy note with the code lying out in the open on your nightstand…

This gets to the heart of my disappointment with Thief as a whole: it feels decidedly like a video game, and an old video game at that.

As technology and advances in design continue to do away with the sort of "game logic" elements we all make fun of in an effort to create more realistic and organic experiences, Thief runs in the opposite direction. It reminds me at every turn that I'm playing a game, and breaks my immersion with mechanics that don't make sense in the context of its world.

One example is mentioned in Brad's review: the inability to pick up bottles unless they're the specific kind the game allows to be thrown. An even bigger one is discovering that Garrett, a master thief with the agility of an acrobat, can't hop over a pressure plate on a floor that looks to be about 3 feet square because the game wants the player to disable the trap instead. Moments like these are everywhere in Thief.

Another example are the overly-predictable guards and their continuously looping dialogue. Traveling through the city is a bit like living Groundhog Day—everyone is in the same spot, saying the same thing, every time you go past them, and players will go past them…a lot.

Thief's city is a sprawling mess of buildings, alleys, and blocked-off areas that make getting from point A to point B far more irritating and time-consuming than it should be. The map is essentially useless, because what looks like a path from one zone to the next on the HUD is often an arbitrarily-gated dead end. Add in mixed elevations, the inability to set custom markers, and zone lines that aren't clearly marked as such, and the whole idea of traversing this city becomes more aggravating than enjoyable.

Things like this, and the dodgy "looks like someone smeared Vaseline over the camera lens" soft focus of the graphics (to say nothing of the shuddering in cutscenes, which appear as though they'd have been right at home on the PlayStation 2) only drive home the point that Thief is hopelessly mired in a between-gen limbo.

This is unfortunate, because Thief is not a complete wash. The story may be ridiculous piffle, and the tech and design issues are occasionally confounding, but there is something inherently pleasing about guiding Garrett through a mission without raising any alarms. Dishonored did it all better, and owed the original Thief for giving them the foundation to build upon, but Thief does manage to get a few things right in spite of itself.

There are even a few instances where the game really works.

Traipsing through an abandoned-or is it?-mental asylum is every bit as spooky as the best survival horror titles. Why Eidos Montreal chose to force these settings into a supernaturally-tinged story that's ludicrous beyond words (and ends abruptly to boot) is beyond me. Thief would work much more effectively in a real medieval world setting, with big and elaborate heists like something out of the classic Hitman games as the meat of the gameplay. Instead, Garrett is mostly relegated to stealing cutlery and reading everyone's strewn-about notes. If this is the life of a master thief, then maybe he'd have been better off just getting a regular 9-to-5…

In some ways, it's fitting that Thief

is set in the past, because the game feels like a bit of a relic. It's not an inherently bad title, but it does have a lot of issues that make getting to the end feel more like work than play. Garrett is an interesting character, and I'd be willing to give this franchise another shot based on its illustrious past, but Eidos Montreal needs to go back to the drawing board before emerging from the shadows with a sequel. Rating: 5.5 out of 10

I hated that map so much, it was the main reason that I stopped playing it. The map, and the repeating dialogue. You know what’s more realistic than guards who say the same thing over and over again? Guards that don’t say anything, and just guard.