A Witcher's Work is Never Done 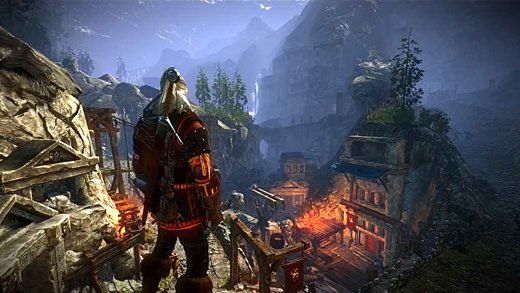 HIGH The moment when the combat clicks and Geralt slices through five or more attackers with ease.

WTF Being tossed into the story with no clue who any of these people are if you didn't play the first game.

In a world where experienced gamers complain that modern releases require players to do little more than "push the win button," CD Projekt RED's The Witcher 2: Assassins of Kings Enhanced Edition

is like a throwback to another era—one where men were men and games were hard.

When the PC version was released last year, it quickly joined the ranks of titles like Demon's Souls in the modern pantheon of "games that will kick your ass." For weeks after its debut, message boards and Twitter feeds were filled with complaints about the game's brutal difficulty—and the way it tossed players out into the cold, unfeeling world with little in the way of guidance. Some of those issues have been addressed in the recently released Xbox 360 port of the game (which brings along the tutorial added in the 2.0 PC version to ease players into the action-oriented combat), but rest assured—The Witcher 2 is still a challenging experience that will make players pay for every mistake in the early stages.

In fact, it's those first few hours of The Witcher 2 that are the biggest hurdle to entry across the board. Between the combat that can lead to death in any encounter and a story that tosses players into Geralt of Rivia's world without much explanation as to who's who or why they're doing what they're doing, the early stages of the game can be a bit off-putting. Those who persevere will be rewarded with a deep action role-playing game (RPG) experience, but not one without some flaws.

Since the first Witcher title was a PC only experience, Xbox 360 owners are coming into the game without any previous knowledge. While the opening act featuring badass swordmaster Geralt helping a king storm a castle is exciting, it's hard for players to become completely invested with no background information. I'm all in favor of games starting in medias res, but even when things slow down, the game rarely does much explaining about what's going on. That's unfortunate, since a huge part of the allure of The Witcher 2 lies in the fact that it features a narrative that is more mature than those often found on consoles.

In time, players will manage to piece together the main plotline. There's an assassin about—and he's got his eye on the kings of the North Lands. When Geralt is unjustly accused of the crimes, he sets out to clear his name and learns that the kingslayer might be another Witcher.

The assassination plotline serves as the overarching narrative, but like all good RPGs, The Witcher 2 offers up plenty of diversions in the form of sidequests. Tackling these jobs off the main narrative path leads not only to experience and loot, but also serves to flesh out the game world, often adding insight to events happening in the core story. 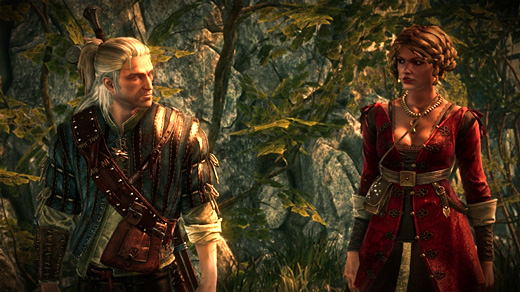 Getting to know Geralt's world is important, because the Witcher will be forced to make a series of decisions which directly affect the political landscape around him. Companies like BioWare have been touting games with choices and morality bars for years, but CD Projekt RED has taken narrative choice to a different level in the game. The options are never black or white—Geralt often finds himself choosing between varying shades of grey. The world of The Witcher 2 is a dark and dangerous place, one filled unlikeable characters with their own agendas, and much like the real world, the decisions are often about choosing the lesser of two evils.

With no clear-cut rights and wrongs, there's a unique sense of freedom to the experience—and significant replay value. One major decision closes off an entire half of the game. More importantly, the decisions feel weighty. I've played tons of RPGs where I was asked to make choices—but none has ever given me pause in quite the way this one did. I spent fifteen minutes at one critical moment, weighing pros and cons and extrapolating potential outcomes even though I knew neither choice was inherently "wrong." This sets the game apart from titles like Dragon Age, where the "good" and "evil" answers seemed far more obvious.

When it comes to battle, Witchers are brilliant swordsmen who can also use alchemical potions to aid them in combat. To truly succeed at the game on the higher difficulty settings, players will have to master not only the swords and potions, but traps, positioning, and countering. The game's encounters are strategic, yet oddly fast-paced and very challenging. When it all "clicks," it's satisfying—but there is a brutal learning curve. Save often, because death lurks in behind every encounter.

Technically, the game is quite an achievement. The Witcher 2 required a fairly powerful gaming rig to run on PC, but somehow they've managed to port it to the ancient Xbox 360 without making major compromises. The game looks great on the console and runs smoothly even in the larger battle sequences. My only real complaints are that it loads frequently when entering buildings, even when installed on the hard drive, and there's a lot of disconcerting texture pop-in.

The biggest issue of all isn't technical, but the way the game ends. Geralt finally meets up with someone he's been looking for throughout the entire game and is tasked with deciding to let the person live and walk away or die by his blade—but before he makes that decision, he can spend twenty minutes talking to this person while they fill him in on every plot detail the game didn't bother to resolve or explain prior to this point.

This exposition dump was my biggest disappointment with The Witcher 2. The game is so focused on its story, the choices, and how all these characters and their motivations interconnect that it's a genuine letdown to see so much of the plot revealed through boring dialogue before a climactic decision. For a game based on a beloved series of Polish fantasy novels, one has to think that CD Projekt RED could have done a better job integrating this information into the narrative instead of just dumping it on the player at the last minute. No author would get away with this—why should a game?

That complaint aside, The Witcher 2: Assassins of Kings Enhanced Edition

is worthy of the praise it got when it was released on PC last year. The Xbox 360 port is an impressive technical accomplishment that brings a classic PC RPG experience to a new audience. The transition is not flawless, but those who stick with it will be rewarded with an intriguing and entertaining experience. Rating: 7.5 out of 10.


Disclosures: This game was obtained via publisher and reviewed on the Xbox 360. Approximately 25 hours of play was devoted to single-player modes (completed 1 time). There are no multiplayer modes.

Parents: According to the ESRB, this game contains blood and gore, intense violence, nudity, strong language, strong sexual content, use of drugs. Obviously, given the list of ESRB descriptors, The Witcher 2 is not a game for children. This is a violent, gory game with mature themes and several instances of full frontal female nudity. Parents will want to steer their young ones clear of this title.

Deaf & Hard of Hearing: Gamers with hearing issues can approach Assassins of Kings without fear. Dialogue subtitles are available and all the decisions are chosen from text prompts. While hearing impaired gamers will miss out on the game's decent musical score and great voice acting, the game still works.

(this text can contain some spoiler so please only read it if you played the game or are prepared for it, and sorry for my english is not my native language) I think the end is adecuate, as a Witcher fan, i can say that the fact of talking with the main antagonist explore the point of him beign truly your enemy or not, since witchers are neutrals except in personals problems. And of course his relationship make necesary that they will talk, also this parts of the plot would have ruined the game experience if you have learned them… Read more »

I wasn’t sure when they put the tutorial in — but I asked some friends who played the PC version at launch and since it wasn’t there I assumed it was new for this version. Bad on my part – but at least people know it’s there now. I’d love to have time to play through a game five times, but unfortunately that’s just not practical from a review standpoint. I did keep some save files so I could go back and see alternate options for a few decisions, but playing through multiple times for a review just wasn’t feasible.… Read more »

Interesting review, to say the least. First, the tutorial was put in with Patch 2.0, not with the Enhanced Edition. As far as I know, there’s a cutscene in the XBOX version of TW2 that summarizes the plot of the first Witcher game, did that help you understand the beginning? I’m really happy you liked the combat and the choice system. It’s easy to get tired with black and white choices and The Witcher was a nice change for me. What I think, though, is that you should have played the game more before reviewing. I’m just finishing my 5th… Read more »