This is your father's Zelda — and that's okay 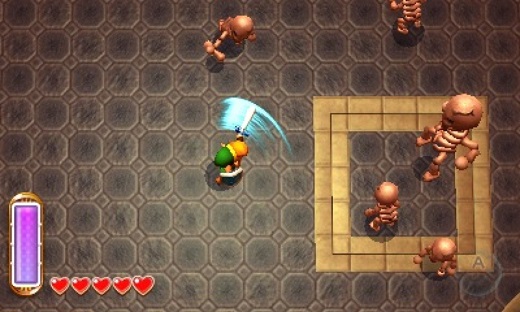 HIGH Dropping right into the action without a lengthy preamble at the start of the game.

LOW The final boss fight is a bit vague when it comes to what the player needs to do.

WTF I can actually get all of the tools in the first hour of the game? Amazing.

Nailing a sequel can be challenging under the best of circumstances, but the degree of difficulty rises exponentially when following something beloved by the masses and regarded as a classic. It’s all too easy to botch the execution by turning in something that’s so much like the original work that it feels like a rehash, or so far astray from its inspiration that it’s unrecognizable to fans. Striking a perfect balance is a daunting task, but the crew at Nintendo has made it look easy with The Legend of Zelda: A Link Between Worlds

As a semi-sequel to 1992’s The Legend of Zelda: A Link to the Past, Link Between Worlds is instantly recognizable to anyone who grew up playing the 2D Zelda titles. In an age with gimmicky motion controls and sprawling, unfocused design, this new entry is a welcome reminder of how the franchise used to operate, and a pitch-perfect argument for picking up Nintendo’s 3DS handheld. However, those who’ve only come into Zelda with Twilight Princess or Skyward Sword might find Between Worlds somewhat puzzling — the graphics are quaint compared to the console titles, and its design feels more open.

Between Worlds is a throwback to the original Zelda – a game where Miyamoto tossed players into a fantasy world and allowed them to explore and uncover things at their own discretion. Somewhere along the line, this changed into a more cookie-cutter style of Zelda wherein gamers are mostly shepherded along a pre-defined critical path. Personally, I find the return to the older style to be a good thing.

It's about trimming the fat when you get right down to it. There’s an economy to the design that’s missing in the large-scale console releases. For instance, the game plops Link into his first dungeon roughly ten minutes in, and then opens up the entire arsenal of tools for exploration in the first hour. From there, players are free to go anywhere they want within the confines of the story. There’s no longer a need to go to “dungeon A to get the boomerang, then dungeon B to find the hookshot” because Nintendo has made all of these items available early in the game.

Freed from the need to push players along a linear dungeon path, A Link Between Worlds is able to place a premium on exploration and discovery. Link Between Worlds also introduces other new mechanics into the story, most notably the ability to merge with walls to access hard to reach areas and flip between the two worlds.

With this new power, Link can make himself into a moving painting when standing next to any flat surface in the game, making traversing wide gaps possible in a way that wasn’t an option in previous Zelda adventures. The mechanic felt a bit flat (pun fully intended…) at first because it’s only usable in a side-to-side fashion and players can’t move vertically at all, but as things progress, it becomes clear that this was the right choice. The beauty of the mechanic is that it’s not just a tool for getting to hidden nooks and crannies, it’s also useful in combat since Link doesn’t take damage in his flat form. As such, there’s an element of strategy in some boss fights that makes them feel at least a little less gimmicky than previous games.

Another interesting tweak to the Zelda formula comes in the form of what is essentially a mana meter for Link’s tools. In the past, player would have to farm bombs and arrows to keep on hand for exploring – and when they were used up, it was time to go kill more enemies that could drop the item. That's been eliminated. Now item use is unlimited, but tied to a recharging gauge. This is a simple change to a standard Zelda formula, but it shifts the feel of play in a major way. Instead of hoarding items for moments when he might really need them, Link can now use them at will to experiment without concern. It’s a great change, and one that I hope Nintendo implements in all Zelda titles moving forward.

A Link to the Past has always been my favorite Zelda, so I was excited to learn we were finally getting a sort-of sequel, but that enthusiasm was tempered by my disillusionment with the past few console titles. However, I’m happy to report that A Link Between Worlds

is not only a worthy follow-up to one of the greatest adventure games of all time, but a blueprint for how Nintendo should update the franchise moving forward. It's also proof that Zelda doesn’t need a complete overhaul, so much as it needs visionary creators with the courage to tweak and evolve its classic formula. Rating: 9.0 out of 10

Parents: According to the ESRB, this game contains fantasy violence. Parents have nothing to fear with the latest Zelda title — this is the kind of kid-friendly experience Nintendo is famous for. Even the difficulty feels toned down a bit.

Deaf & Hard of Hearing: Hearing impaired gamers will miss out on the masterfully reworked Zelda score, but the dialogue is all presented with text.