Game site GoNintendo confirms the rumors that have been floating around for awhile now–Silent Hill is getting a remake on the Nintendo Wii. The latest issue of Nintendo Power features news and screenshots on the new version, currently titled Silent Hill: Shattered Memories.

Producer Tomm Hulett tells the magazine that the new game will be different in numerous ways.

"The characters play different roles, things don’t necessarily happen in the same order, and the story is taken in lots of new directions," Hulett says, noting that you'll still play as protagonist Harry Mason and will run into familiar characters from the first Silent Hill."

He then adds, "One of Shattered Memories' most significant and intriguing additions—your answers actually affect how the game unfolds. And it doesn't end there. the game "watches" you constantly, and your behavior throughout can determine when you'll meet certain characters, which scenes you'll witness, and a variety of other factors." "In Silent Hill games, the town always gets inside the protagonist's head," say Hulett. "But now, it's getting inside YOUR head."

This is pretty intriguing, if only because it sounds like Konami is adding an Eternal Darkness styled "screw with your head" element to the game. This should probably be expected, since Konami also blew player's minds with that whole Psycho Mantis fight in the original Metal Gear Solid.

Maybe the best news of all though, is this:

Hulett also notes that the solution to a puzzle is always in the immediate vicinity, and assures us there's a lot less backtracking then in previous games."

"Longtime fans of the series will also be delighted to learn that there's a way through every locked door; no more checking dozens of entrances only to find that 90% of them are permanently barred shut."

I'm all for less backtracking—so kudos on that. 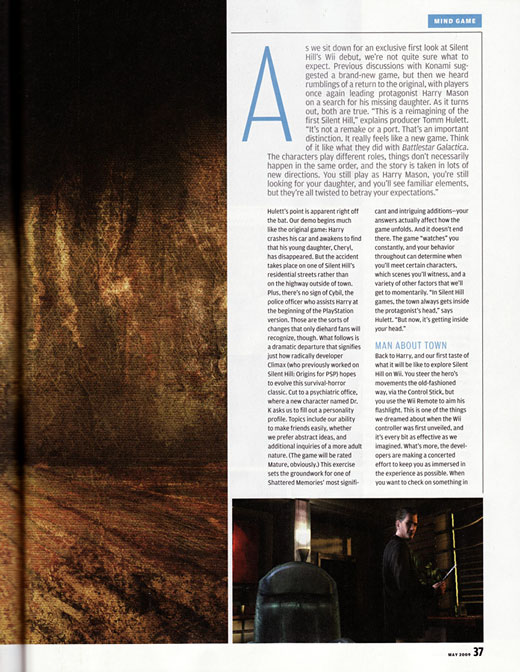 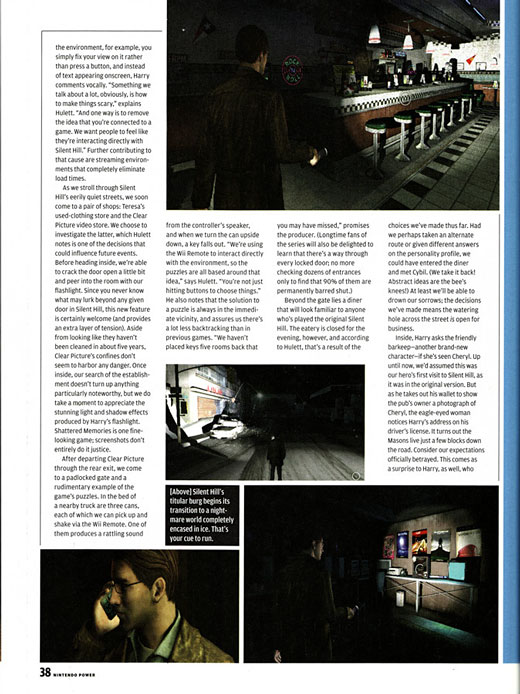 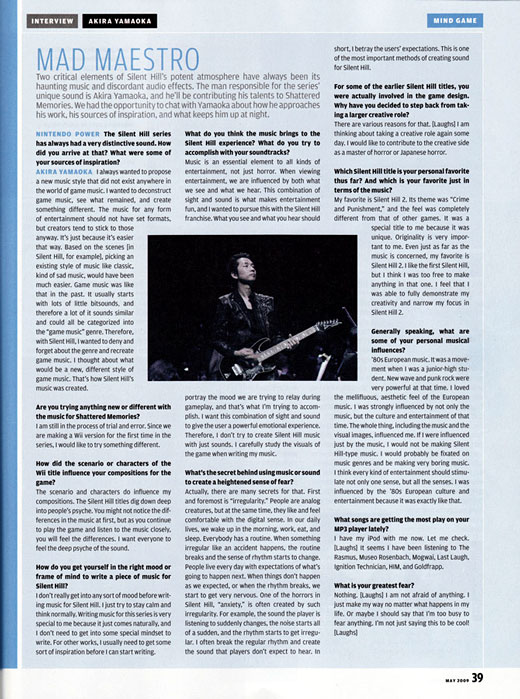 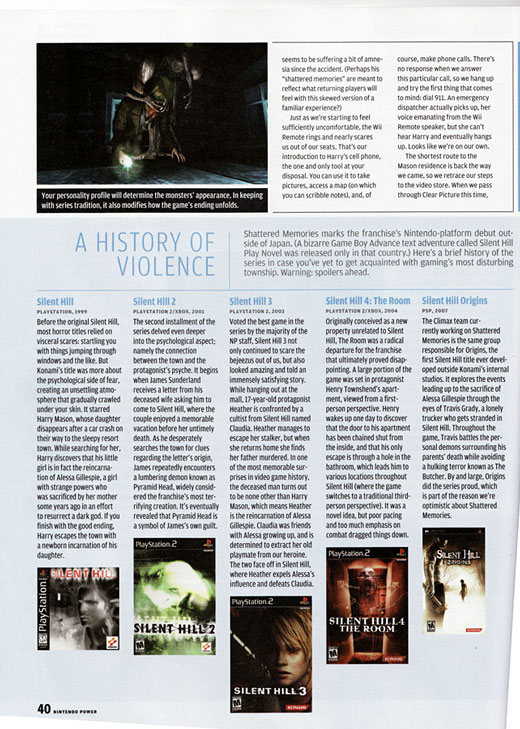 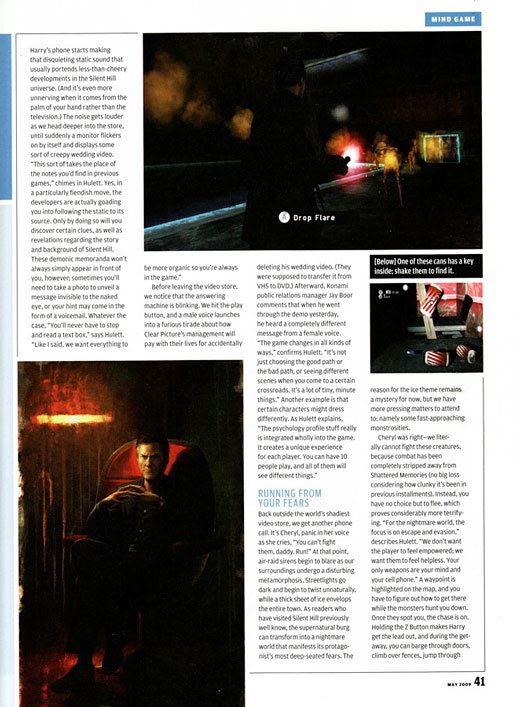 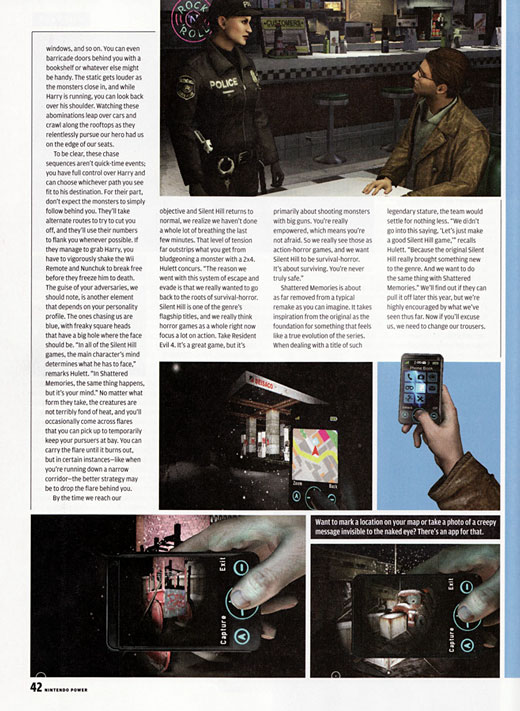 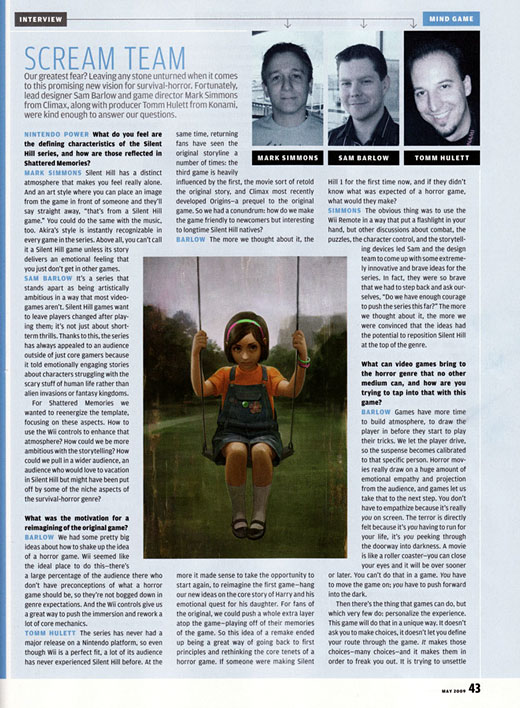 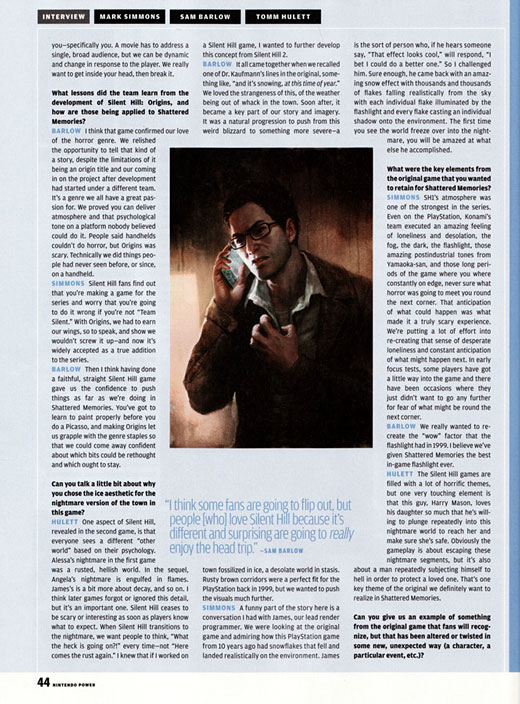 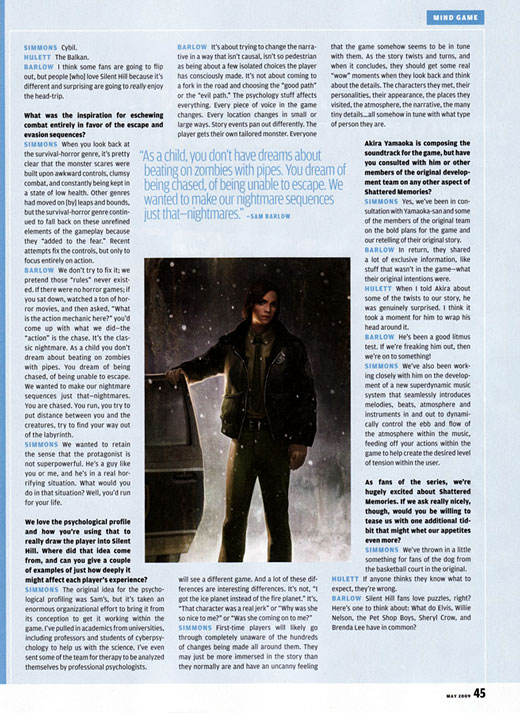 I’m kinda sorta looking forward to picking it up on the PS2 when it comes out. No matter how terrible and missing the point Homecoming and Origins ending up being. I say this based on the fact they are getting rid of the two things they couldn’t get to work. Namely the combat and story. One is gone and the other one’s foundation is already laid.

To be honest though, I really wish they’d just end the series. I thought the recent Siren remake felt more like a Silent Hill game than either of the two American versions.

According to Joystiq and a couple of other sources, Konami is also releasing Shattered Memories on the PSP and PS2.

I thought developers were beyond releasing the same game on the Wii, PSP and PS2, but it seems Konami is not taking any chances. Shattered Memories might not be a big enough deal to push onto the high-def consoles, but it doesn’t mind making it the focus of the mid-range machines.