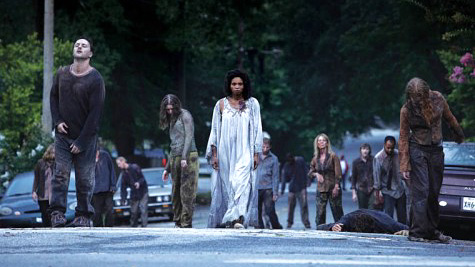 AMC's The Walking Dead might have been the biggest surprise hit of the 2010 television season. Based on Robert Kirkman's comic of the same name, the story of a group of people trying to survive the zombie apocalypse was bound to be a hit with horror fans, but few could have guessed it would have such crossover appeal.

With the first season's six episodes already done, work is under way to prepare for the second episode arc—scheduled to air later this year. In the meantime, it seems like everyone involved is trying to figure out how to capitalize on the show's success—and what could possibly be better than a Walking Dead videogame?

Zombies and games go together like bacon and eggs—and we're now hearing the first rumblings that a game based on the series could be announced as soon as next month.

Gaming website 1UP.com has done a little detective work and what they've uncovered should please gamers and fans of the show.

1UP received an invitation Wednesday to a formal event hosted by Telltale Games in San Francisco. The company, best known for their episodic Sam & Max content, is scheduled to announce five new projects at this affair—and while they're being secretive about what will be revealed, check out this description:

"one based on a just-launched property from the TV and comic book world whose popularity is changing life as some know it."

Hm. Sound like anything we know? I can't think of anything other than The Walking Dead that fits that description.

We won't know what Telltale has up their sleeves for sure until February 17th, but if I were a betting man I'd guess that some sort of Walking Dead game will be shambling on to game systems in the not too distant future. Sounds good to me. What do you guys think?

“Zombies and games go together like bacon and eggs”

On the bright side, at least this is Telltale so we’ll probably get some inventive characters, and can hopefully do without another shooter/action game where we shoot them in the head repeatedly (just like the WWII games).

But to be gloomy, when even Telltale are making zombie games… what happened to creativity?

It’s fairly faithful to the comic, but they’ve made some major changes too. Merle and his brother weren’t in the comic, and I don’t recall the whole of the final episode being in there either.

I think the potential is there for it to work, but I don’t want it to be just another zombie shoot ’em up.

Other than knowing of its existence, I’m not familiar with the comic. Enjoyed the series, though the finale was a little lackluster and didn’t live up to the first five episodes. A videogame based on the Walking Dead could be interesting, but I am cautiously optimistic. Since the TV series (is the series faithful to the comic?) focuses more on the human interaction and choices they face, I’m worried that a game would just turn out to be a zombie shoot-em-up.

Well i think that a serious game would be fine, i just don’t want to see a cartonish or adventure game from Telltale. As a matter of fact i would like to see Rockstar developing this game, just because i love the cuality of their games… I don’t know, lets wait and see