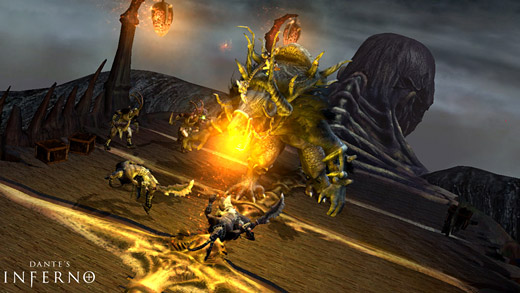 Kotaku is reporting that Electronic Arts' anticipated horror-themed God of War-clone Dante's Inferno is now headed to the PlayStation Portable as well as the PlayStation 3, Xbox 360, and PC.

The title, which finds players guiding their character through a videogame version of the nine circles of Hell, sparked an intense Hollywood bidding war for the film rights before it was even officially announced. Early buzz for the actual game has been largely positive and it's one of numerous titles I'm actually looking forward to trying out in 2010.

So far, there are no details about how the portable version might differ from its bigger brothers, but EA is saying that it will release on the same day as the console titles. Cool news for those who don't have a PS3/Xbox 360/Gaming PC, but I'd have to wonder who would actually want to play it on the PSP if they had the option to play it on a television screen or PC monitor. I guess maybe people who have lives and occasionally leave their house, which disqualifies me completely.

Don’t knock the PSP. While it isn’t printing money for Sony the way the DS is, the PSP does at least get decent M-rated titles that sell.

Since Dante’s Inferno is already labeled a God of War clone maybe it will actually be the perfect title for someone with a PSP.