Have fun storming the castle 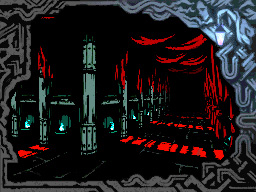 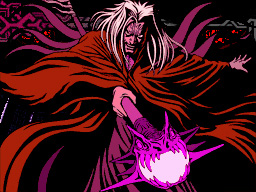 HIGH Surviving an onslaught of six or so enemies without having any characters die.

LOW Constantly having to create and level new characters because I couldn't afford to revive the ones who'd fallen in battle.

WTF I don't want a game that holds my hand through the experience, but a little explanation about how things work would have been nice…

Have an annoying friend who continually insists role-playing games are easy and take no skill to complete? Hand him a copy of The Dark Spire and watch him change his tune.

Having been a card-carrying RPG nerd for over two decades, I can count on one hand the number of console and handheld RPGs that were nearly too difficult to finish. Seventh Saga confounded me for years (I finally sat down and finished it a few years back), Phantasy Star II's first person dungeons made me insane, the Cave to Rhone segment in Dragon Warrior II nearly gave me a stroke, and…that's about it. Sure there are side quests that are insanely difficult (or extraneous challenges like beating Star Ocean II's Indelacio with the limiter off) but when it comes to core game experiences, I've not run into many RPGs that I couldn't handle. I can now add another entry to the "very difficult" list.

The Dark Spire owes a great deal to Wizardry. Gamers old enough to remember the golden days of that franchise probably don't need to read the rest of this review—they're either already saying "nope, this isn't gonna be for me" or they're currently starting their car in order to make a mad dash to the nearest Gamestop so they can pick up a copy. Younger gamers who aren't familiar with Wizardry will inevitably compare The Dark Spire to Atlus' Etrian Odyssey. Both comparisons are valid, but the Wizardry one is more accurate. Developers Success have crafted a portable homage to the Wizardry games (with a hint of Shadowgate thrown in for good measure) that is either utterly charming or confounding depending on the player's perspective. This is a title where there's no middle ground—it's a love or hate proposition. It's a niche game in an even more niche subgenre, but fans who appreciate a good old fashioned dungeon romp are almost assuredly going to eat this game up. Everyone else can feel free to move along to "Generic Sci-Fi War Shooter #846."

Like its inspiration, The Dark Spire wears its difficulty like a badge of honor. It's been years since I've played a Wizardry title, but I've never forgotten how brutal the games could be. The Dark Spire isn't quite as hard as Wizardry—but in today's age, where titles tend to hold a player's hand from the opening cinema through to the final boss, it's a bracing reminder. This is not a game for the impatient, the easily annoyed, or anyone who wants to take a casual stroll through the dungeon. The Dark Spire is an obtuse experience—a game that throws players right into the action and never bothers to explain much of anything. It's sink or swim time, a proverbial Darwin's Theory in videogame form, and the weak will never see the second floor of the title's spire.

The game will be written off by many as "simple." It's a first person perspective dungeon crawler with charming (yet very simplistic) graphics. I hesitate to even call them graphics—they're really just still screens with text scrolling across the bottom. Gamers expecting fantastic spell effects and FMV summon animations are in for a huge letdown. That's okay, though, because while the visuals might be simple (particularly in the bonus "wireframe mode" included to appease the truly old school gamers), the gameplay certainly isn't. 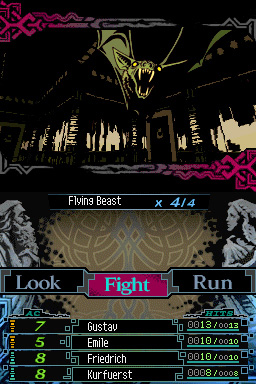 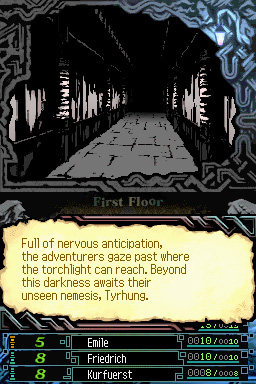 Upon booting up the game on the Nintendo DS, players are thrust into a world where they're talking with a guildmaster. The nearby tower has been taken over by a dark wizard, and it's up to the player (controlling four characters) to venture into the edifice and restore order. After a brief encounter with a trainer (who outlines the most rudimentary functions of the combat system), it's off to find fame and fortune—or more likely, frequent death.

Players can roll new characters at any point (provided they're at the guild) and choose a name for them, their race, and alignment. Stat points are doled out by randomly pushing a button, and the number of points in specific categories determines what sort of class the character can be. Unhappy with the stats? Roll them again. After that, it's off the spire, where players will engage in lots of random encounters, each one with the potential to end the game.

It's really that simple—and yet, it isn't. The Dark Spire adds in all sorts of extras (and again, the game never explains any of them—and some are only found through trial and error…like the game's "prestige classes") like varying forms of attack, weapons that aren't class specific, and skills that seem pointless (dancing? really?) yet actually serve a purpose once players figure out what they do. This is a title screaming for a strategy guide if only so players can get a handle on all of the things in play that the game (and instruction manual) never bother to explain adequately. I'd never advocate playing through The Dark Spire step-by-step with a walkthrough, but anyone who settles in for this journey will be looking for answers and explanations at some point before the end credits roll.

This lack of explanation for how the game works is the one major problem I have with the title. I can deal with the difficulty (I even liked it in a masochistic sort of way—there's something to be said for fearing every single random encounter in a game, which is part of why the Shin Megami Tensei games are so popular), but I can't shake the feeling that at least part of the challenge was solely because I was playing the game wrong. In another era, where I only got to play five or ten games a year, I could have set aside the time to experiment with the ins and outs of The Dark Spire. Now, though, where I play 30 or more titles a year and have less time to play them to begin with, I'd like to have a game (or manual) explain the basic mechanics instead of leaving me to flounder in the dark.

My save file says I spent a grand total of four hours and ten minutes with The Dark Spire—the reality is that I spent roughly double that time, caught in vicious cycle of dying, making new characters (because the price of reviving the dead ones is fairly exorbitant early on), and leveling over and over again. It's only now that more people are playing the retail release and sharing information that I know I was missing out on some things that would have made the experience go more smoothly. I'm cool with having to consult walkthroughs and other players for strategy advice or to share tactics. I shouldn't have to do it to understand the way the core game was meant to be played.

Despite that beef, The Dark Spire is a pleasing throwback to an era when games were actually hard and beating them felt like a legitimate accomplishment. I didn't get to see the end credits on this one (a mark of shame on an otherwise perfect RPG record…), but I suspect I'll be making a return trip to climb this spire again. Rating: 7.0 out of 10.

Disclosures: This game was obtained via publisher and reviewed on the Nintendo DS. Approximately 8 hours of play was devoted to single-player modes (completed 0 times) and 0 hours of play in multiplayer modes.

Parents: According to the ESRB, this game contains Alcohol Reference, Fantasy Violence, Language, and Suggestive Themes. I'm still wondering where the "Suggestive themes" were in this game. Parents shouldn't worry about The Dark Spire's content—the real reason not to give it to your child is because it's a complex, difficult, and occasionally frustrating experience that will aggravate most younger gamers.

Deaf & Hard of Hearing: You guys will miss out on the moody soundtrack, but the story is told completely in onscreen text.