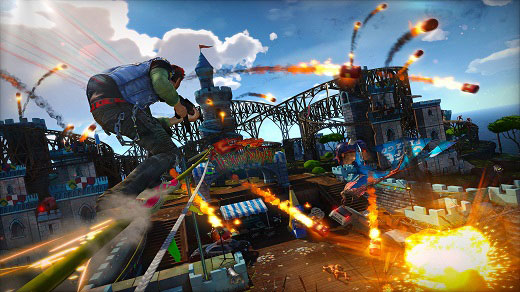 LOW Finding yet another generic NPC who's going to send me on an endless parade of sidequests.

WTF Why break the fourth wall to make fun of videogame tropes just to turn around and use the same tropes in your game?

In retrospect, it seems fitting that Insomniac’s new open world shooter Sunset Overdrive was released just days before Halloween. Why? Because it's a veritable Frankenstein’s Monster, assembled from the pieces of other (often better) titles.

Take the rail grinding of the Tony Hawk franchise, splice in the open world of Grand Theft Auto, toss in a sprinkle of Dead Rising’s endless parades of enemies, pour in about half a cup of Ratchet & Clank’s crazy weapons, season with the traversal system and air dashes of games like Jet Grind Radio and Gun Valkyrie, and then top it off with Saints Row’s irreverent humor, the result would basically be this new Xbox One exclusive.

On paper, this sounds like it could be pretty awesome—and to be fair, Sunset Overdrive does have some enjoyable moments sprinkled throughout its campaign—but the whole project ultimately struggles to get out from under the crushing weight of its inspirations. If fails to forge its own unique identity. No amount of fourth wall-breaking or self-referential jokes about all the stupid stuff videogames ask players to do can mask the fact that the devs have created a campaign where roughly 20 hours will be spent doing the same stupid things over and over again.

What works is the game’s core conceit that traveling on the ground during an emergency lockdown is a bad idea. The city in Sunset Overdrive is a colorful and expansive environment filled with things to grind across, vault on, climb, and explore. The game makes fantastic use of vertical space—anything that can be seen can be vaulted up to. Add in the ability to shoot while doing this, and the potential was here for a unique experience since grinding across the city feels natural and enjoyable.

The issue is that Sunset Overdrive never quite nails the mechanics of the shooting and grinding. There’s a learning curve in the first couple of hours, and the fussy camera doesn’t help players get over the hurdle. Trying to shoot, grind, and navigate all at once is challenging early on, even with the ability to slow down the action. To compensate, the game offers up what might be the most generous aiming assist system I’ve ever seen. Just pointing in the general direction of an enemy will usually score a hit. It’s a necessary evil because the game would be frustratingly difficult without it.

The other unique positive in the Sunset Overdrive experience is the game’s customization system. Players are awarded various 'amps' for collecting things (ugh) scattered across the city. These amps can give weapons bonus effects, or provide the main character with special abilities when they fill a super gauge while grinding and killing enemies in stylish ways. This adds some individuality to the experience as the player can build a character that suits their strengths and preferred playstyle. This is reinforced by a badge system which awards perks for using certain weapon types, moves, killing enemies, and so on. These are then used further mold and customize the character.

Unfortunately, the rest of the experience struggles to be so engaging.

The biggest shocker of Sunset Overdrive for me was that it’s not very funny. Insomniac has made me laugh out loud with the exploits of Ratchet, Clank, and Captain Qwark over the years, so I had high hopes that this game would do the same. It never even comes close. Instead, it crams in a lot of pop culture references and snarky humor (most of it painfully obvious) and calls it a day. The only genuinely funny moments were the imaginative respawn animations. Humor is subjective and I know a few colleagues who found the game amusing, but the majority of the jokes just flat-out whiffed for me. It feels like it’s trying way too hard.

Occasionally, we get a break from the monotony with a 'defend the base' mission—basically the game’s version of tower defense. Players set various traps around the camp, then must protect the site’s vats (used for making amps) for a set amount of time. These missions were generally solid because of the trap element, but they were so infrequent that they felt like a half-finished toss in. Not being able to use the traps in the world at large was also a huge missed opportunity because placing turrets on the ground while mowing down enemies from the rails above would have been amazing…

Ultimately, Sunset Overdrive feels like it's ticking off boxes on a design chart. There’s nothing wrong with having inspirations and paying homage to them, but if you don’t expand on those influences in any meaningful way, what’s the point? Insomniac has crafted a solid experience that will entertain even though it’ll be overly familiar to anyone who’s been a gamer for the past few years. I also see it as indicative of the issue facing the current generation of console games. Where’s the innovation we were promised with this new hardware? Unfortunately, the answer is “not here.”  Rating: 6.5 out of 10


Disclosures: This game was obtained via the publisher and reviewed on the Xbox One. Approximately 22 hours of play was devoted to single-player modes (completed 1 time) and 0 hours of play in multiplayer modes.

Parents: According to the ESRB, this game contains blood and gore, sexual themes, drug reference, strong language, violence. Sunset Overdrive is not a game for the littlest of kids, but I was surprised to learn that it was rated Mature. While the game does feature violence, it's cartoonish at best. Even more interesting is that the game includes an option to tone down the profanity and gore — so if you have a tween who's dying to play the game, realize that you can change these settings to make things more age appropriate.

Deaf & Hard of Hearing: You'll miss out on the punk rock soundtrack, but the game features full subtitles so you won't have to miss any of the dialogue and story interludes.