Insert Your Own "It's Tricky" Joke Here 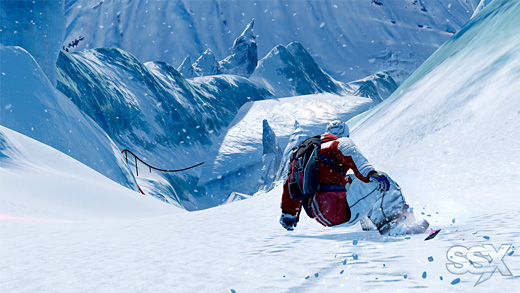 HIGH Logging in to see you've earned credits when friends failed to beat your scores.

LOW Dropping into another bottomless pit a hundred yards from the finish line.

WTF Why does reversing time only affect me and not anyone else?

It's been years since Electronic Arts (EA) dropped a new SSX title (the last was 2007's Wii-exclusive SSX Blur), but the snowboarding franchise has returned in a big way with the recent release of SSX

. However, gamers used to the lighthearted and gravity-defying antics of previous SSX entries may be the most surprised by what the new title brings to the table. The crazy tricks and extreme jumps the series is known for are still here, but EA has made the disappointing decision to tinker with the traditional formula in ways best described as problematic. With these annoying tweaks, playing through SSX more of a chore than it should be.

Of all the additions, the survival courses are the most obnoxious. These tracks function like the "boss encounter" of each area and require players to use a special tool to navigate them successfully. Some are simple, like a Deadly Descent requiring armor to protect the SSX member from fallen trees. Others are far more aggravating—like using the flight suit to cross wide chasms or the oxygen tank for high altitude runs. The Survive levels just aren't fun—the joy of SSX lies racing down the slopes and doing tricks, and these events lose sight of that.

Meanwhile, the game's bottomless pits are almost as annoying. Many tracks feature these deathtraps, which seem like a cheap way to add difficulty to the title. SSX's steering feels overly sensitive as it is, and when players are trying to stay on track and avoid a plummet to their death, the potential for frustration increases almost exponentially. Again, it's as if the developers lost sight of what makes these games fun and tried to complicate things solely for the sake of being different.

Have I yet mentioned the difficulty curve that goes from incredibly easy to controller-breakingly brutal at the drop of a hat, and AI opponents who exhibit flawless performances in both trick and race runs? To combat this issue, SSX features a "reverse time" feature a la Prince of Persia. Sounds great, right? It would be—except that reversing time only moves the player back to the point before their mistake. Everyone else keeps right on going, putting the player even further behind the pack. How is this helpful, particularly when the AI seemingly never messes up and nails every trick? 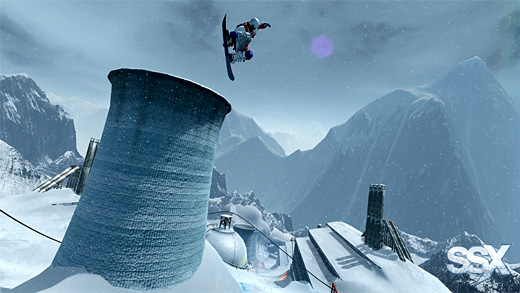 In perhaps the strangest twist of all, SSX features an auto-advance feature that allows players to move past events after several failures. Doing so comes with no penalty—gamers earn the full amount of credit and experience they would have if they won. It's as if the development team realized the game was too hard at points and rather than just adjust the difficulty they decided to let players skip through things instead. It's entirely possible to move through almost all of World Mode without ever winning a single event. SSX is certainly hard at various junctures, but this isn't the way to combat the issue.

The game doesn't help its cause by starting players in the World Mode single player campaign, where a dreadful story about racing a former SSX team member across the globe's nine deadliest descents takes center stage. Each mountain range features a series of events involving races, trick runs (where players earn combos for linking extreme moves), and a survival event. They also unlock a new team member for use in other modes. Unfortunately, the events in the World Mode are fairly boring.

The game's Explore Mode is where the real single-player fun lies. Featuring over 150 drops with various objectives, running through these events will keep players busy for hours on end. The mixture of races and trick runs keeps things feeling fresh and the fact that player scores are recorded so that friends can try to beat them adds one more addictive element to the mix. Spend as little time as possible in the World Mode—Explore is where it hums.

Online mode is also impressive, featuring events spread across the globe where players compete for credits used to buy better gear. I spent several hours with the online component and had significantly more fun with it than I expected. In a weird twist, the full online mode is available without an online pass, but credits earned are banked and can only be redeemed once a pass code has been entered. Those concerned that EA might be softening on their money-making ways should have no fear—credits can be purchased through micro-transactions and not just won in races. Good ol' EA—always looking for ways to make an extra buck…

While there's no denying that SSX has some genuine issues—ones that annoyed me quite often while I was playing—there's something to be said for the fact that despite those problems I kept coming back for more. When the game works—when players are slaloming down mountains and leaping hundreds of feet into the air while pulling off a series of physically impossible maneuvers—it really works. In those moments, touchy controls, poor design decisions, and questionable AI don't seem to matter much. In a way, SSX

is another title that's more worthy of purchase for the online mode than the single-player component. There's certainly fun to be had in the game's Explore mode, but the online races and events offer up a seemingly never-ending (at least until EA shuts down the servers in a few months) series of events against a global community of players.

That being said, the game still does have its issues—and some of those issues do really mar the experience. The foundation of a solid current gen SSX game is lurking right beneath the surface of this title—let's hope EA unearths it for the potential sequel. Rating: 6.0 out of 10.


Disclosures: This game was obtained via EA and reviewed on the PS3. Approximately 9 hours of play was devoted to single-player modes (completed 1 time) and 4 hours of play in multiplayer modes.

Parents: According to the ESRB, this game contains mild lyrics and mild violence. SSX is about as kid friendly as a game that isn't based on a cartoon gets. The only potentially objectionable content here is convincing your kid that he can't really jump a hundred feet into the air on a snowboard and trick off a hovering helicopter.

Deaf & Hard of Hearing: There are no subtitles in SSX. Granted, the game isn't packed with dialogue, but the various helicopter pilots will warn players of track hazards lurking just ahead. With no subtitles, hearing impaired gamers will be at a distinct disadvantage in the game.