Never Fart on a Man's Balls 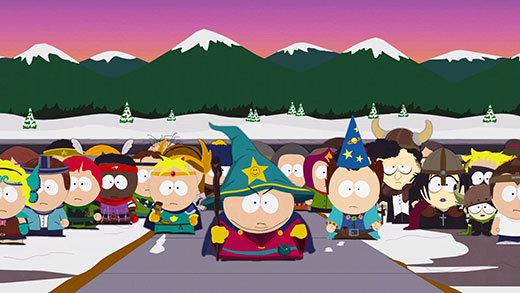 HIGH The game nails the feel and tone of a South Park episode perfectly, minus all the bleeping. It's hilarious.

LOW The occasional bout of slowdown can be annoying.

WTF This whole game is one giant WTF moment. From Aborted Nazi Zombie Fetuses, to a return trip up Mr. Slave's colon, Stick of Truth is batshit crazy.

has finally arrived, and more importantly, it's one of those rare licensed games that's actually good.

After clearing what could have been several fatal hurdles (including the bankruptcy of publisher THQ) the game arrived on store shelves none the worse for wear. This role-playing game (RPG) from developer Obsidian is hands-down the most faithful videogame recreation of Trey Parker and Matt Stone's beloved Comedy Central series. It also might be the funniest title in the medium's history for players who have the stomach for its irreverent, profane, and offensive sensibilities.

Players take control of the genre's cliched mute protagonist, a new kid who's just moved into the small town of South Park and quickly labeled "Douchebag". Our hero runs into Butters and Cartman, who recruit him to take part in their epic fantasy game, wherein he'll be tasked with performing duties for Cartman's Grand Wizard of The Kingdom of Kupa Keep (yes, Cartman is the Grand Wizard of the KKK…) in their war against Stan and Kyle's elf faction. The stakes are high because the Stick of Truth guarantees its possessor all the power in the universe…

The Stick of Truth essentially serves as a super-sized episode of the show. Obsidian and the South Park team have done a magnificent job of recreating the program's animation style for the game, to the point where it often felt like I was controlling an episode. Fan-service is the order of the day, with essentially every major and minor South Park character showing up at some point. This is great for followers of the show, but could be a little overwhelming to newcomers, or those who've only sporadically followed the series.

So, Obsidian nailed the tone of the show, but does Stick of Truth play well? The answer there is a little more complicated.

The title is essentially a "lite" RPG, meaning it has a lot more in common with classic era games than modern entries. It's a turn-based affair wherein our hero can team up with one of five other characters to take on enemies. Each of the five allies has their own special moves, strengths, and so on. I will admit to being a bit disappointed that I could only have one other party member in combat, but the inclusion of the ability to swap them on the fly during battle at least alleviates some of the issue.

What's slightly more frustrating is the combat itself. The battles are turn-based, but require button presses at specific instances to block or deal decent damage. This isn't too complicated during a one-hit attack or defense, but when players are required to block multiple hits, it becomes a problem because the inputs don't always register the way they should. Fortunately, most of the encounters are simple enough that mastering the combat system isn't necessary, but it can be frustrating during some of the boss encounters (particularly Al Gore) wherein Secret Service Agents like to shoot without giving the player a proper cue to block.

Combat aside, Parker, Stone, and the guys at Obsidian clearly know their game conventions, and Stick of Truth skewers them regularly. There's a section devoted to making fun of modern gaming's ubiquitous audio logs, odes to the old Simon handheld game, DDR-inspired segments for bard songs, and so on. The send-ups are well-implemented and genuinely clever.

Given Obsidian's track record for buggy games, I was a little worried before starting, but I'm happy to report that most of those concerns were unfounded. This title is not without minor technical issues including a glitch where it's impossible to move left or right for a few seconds after opening chests, and there's some noticeable slowdown on the PS3 version, but I didn't experience any game-breaking or game-crashing bugs. Kudos on that.

For fans of South Park, The Stick of Truth

was certainly worth the wait. Finally being able to explore the town (and Mr. Slave's colon) while fighting elves, Nazi zombies, and aborted fetuses is something fans have wanted since the show made its debut back in 1997. That it manages to play well while also mixing in the fanservice viewers expect is worthy of praise. The gameplay portion is the weaker of the two halves here, but it's not so unbalanced as to ruin the experience. Grabbing this title is a no-brainer for the show's legions of devotees. Rating: 7.5 out of 10


Disclosures: This game was obtained via publisher and reviewed on the PS3. Approximately 20 hours of play was devoted to single-player modes (completed 1 time) and there are no multiplayer modes.

Parents: According to the ESRB, this game contains blood and gore, mature humor, drug references, nudity, strong language, strong sexual content, and violence. Look at that list, parents. Clearly, this is not for kids, even though the animation style will captivate them. This game is a lot like the unrated film version-it's hilarious, but the humor is very adult.

Deaf & Hard of Hearing: South Park: The Stick of Truth comes with full subtitle options, so gamers won't have to miss out on a single joke. You will, however, miss out on hearing Taco Flavored Kisses on the soundtrack.

This is the best game I’ve played in the last year, an absolute must-have for fans of both ‘South Park’ and RPGs: 9/10.

If you are not a fan… well it’s probably not as great then.

To note: there are no slowdowns on PC, and in fact I haven’t seen a bug of any kind which must be a first for an Obsidian game.