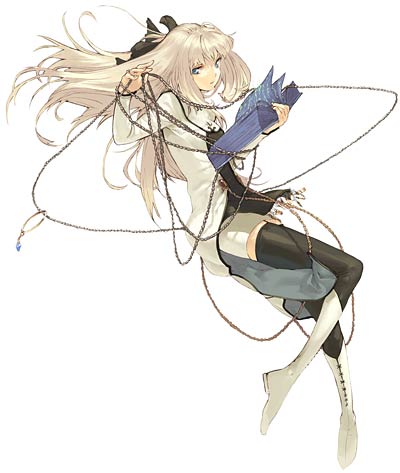 Sega is a weird company—almost the antithesis of Nintendo. Both corporations were once gaming giants who've seen their stock fall in recent years, both created some of the greatest videogame IPs of all time, and both are still players in the industry. Yet, while Nintendo still makes consoles that cater to their hardcore legions of fans (and games that those fans vociferously want), Sega opted out of the console hardware business after the Dreamcast and seems almost single-handedly determined to take its classic franchises and pervert them in ways that do little more than alienate their core audience.

Don't believe me? Here are but a few examples: Phantasy Star went from a traditional role-playing game to an online dungeon crawler, to a card game, to a different online dungeon crawler. There are fans who'd kill for a traditional Phantasy Star RPG (and no, the sad excuse for one available in Phantasy Star Universe doesn't count) and other fans who'd be just as pleased to see another version of Phantasy Star Online instead of what passes for a PSO iteration in PSU. See? Sega annoyed not one but two groups of fans there—that takes skill. They've done similar things with Sonic the Hedgehog (the problems there would be an article in and of itself), and criminally ignored classic franchises like Nights and Panzer Dragoon (Panzer Dragoon Orta was the one time Sega has actually gotten all this right—so why haven't we seen more Panzer Dragoon games?)

Another example of this problem, and the focus of this review, is Shining Force. Once upon a time, Shining Force was one of the best Strategy RPGs around. Lots of nifty mythological characters made up the player's army, battles were fought on grids…it was one of the coolest series to ever appear on the Genesis. It moved over to the Saturn, which was the beginning of the end (the saga of SFIII is a long and strange story) and then basically fell off the face of the Earth, despite the fact that it turned up in every internet thread ever created about classic franchises Sega should revive. Sega fans got their wish a few years ago when Shining Force Neo was announced. However, in typical Sega fashion, they couldn't simply give the fans what they wanted (another SRPG), but instead had created an entirely new game and stuck the Shining Force name on it. Neo wasn't an SRPG at all, but instead a hack-and-slash dungeon crawler.

Once the initial shock wore off, gamers were treated to a really good game in Neo. Sure, it wasn't the one we all wanted, but if you were into Diablo-styled games on a console (or a fan of cult classic Record of Lodoss War on the Dreamcast), then Neo was a heck of a lot of fun. Apparently, enough of you felt the same way about it, because the title sold well enough to spawn a sequel, Shining Force EXA. 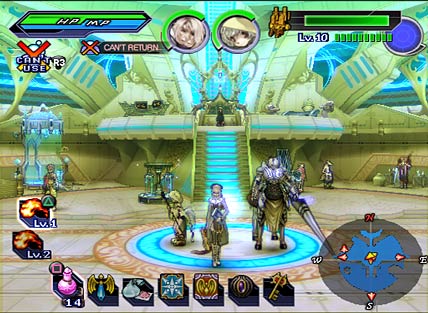 EXA is eerily similar to its predecessor in most ways. It has a generic story that ties itself into the Shining Force universe by including the legendary sword Shining Force, and it has a few centaurs running around, but other than that, it's an SF game mostly in name. Players take control of Toma, a young swordsman, or Cyrille, a young mage, and guide them on a lengthy quest to find Shining Force and save the world. No one in the RPG business even tries to come up with interesting stories anymore, and EXA pretty much confirms it. Players will stop caring about the plot after the ten minute mark—which means the gameplay had better be damn interesting.

Fortunately, it is. There's always been something strangely cathartic about hack-and-slash games. You charge into a room, pull out your weapon (or ready your spells) and just beat the holy hell out of large groups of nondescript enemies. EXA understands that and runs with it. Toma is the player's brute, able to sport a multitude of weapons and take a fair pounding while slicing through monsters like Jack the Ripper armed with a Ginsu knife after a week-long crack binge. Paired up with his partner in battle, a female elf with a bow, he's more than capable of bringing the pain. Cyrille, meanwhile, is a ranged attacker with a variety of spells at her disposal. Her partner, a centaur knight, takes most of the physical abuse while she dances around at a distance lobbing balls of fire and ice at the bad guys.

This is a change from the first game, since Neo only featured one main character for the player to control throughout the campaign. EXA doesn't force players into choosing whether to be Toma or Cyrille—it forces them to play both. When Toma is in the field, Cyrille is back at the castle earning a fraction of the experience. The problem is, occasionally the castle comes under attack and whoever's been left back at the base has to defend it. Therefore, if you use one character extensively the other falls behind and can't defend the castle—leading to a frustrating game over screen. So, players have to keep swapping back and forth between the two leads in order to keep them fairly even in terms of level, otherwise it becomes nearly impossible to keep the game moving forward. Being forced to play both characters and the castle battles in general are easily my least favorite things about EXA. I like to play the bruisers in this sort of game, and I had no interest in playing Cyrille at all—but I was forced to spend half of my time with the game running around with the dainty spell-slinger.

Now that we've gotten that out of the way, let's discuss a few other positives (and another issue) with the combat system. Hack-and-slash games, by their very nature, are repetitive. Basically, it's hour upon hour of running through dungeons mashing a button or two over and over in order to gain loot, gold, and experience. EXA is no exception. However, in an attempt to at least make the combat somewhat interesting and engaging, the game features a combo attack system. Pushing a button, then hitting it again, then holding it will launch a special charge move. Hitting it again during the charge move charges another attack—which certainly helps clear out large areas of enemies…something the game has in abundance. These moves add a little bit of skill to what is basically a button masher. Pulling off the chains isn't hard, but it does require more effort than simply mashing one button over and over for 50 hours. The problem here is that the game tries to cram huge amounts of enemies on the screen all at once—pushing the PS2 hardware to the point of exhaustion—which causes the game to slow down to a crawl and most of your button presses to not register. I love the fact that my characters can wander into areas where they're so surrounded by bad guys that I can't even see them, but when it affects my ability to play the game, it starts to become something of a negative. Players will almost assuredly die at points in the game solely because of this slowdown—and it becomes more and more aggravating every time it happens. 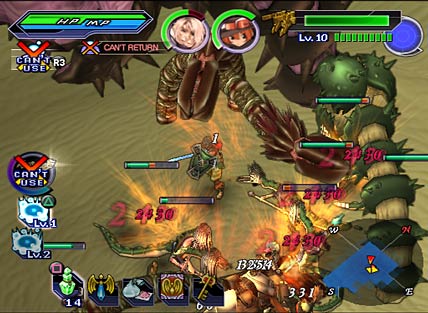 Of course, these will be some of the only times you will die in the game. EXA is a definite step down in terms of difficulty compared to Neo. Neo, like Record of Lodoss War, would let you wander pretty much anywhere right from the start of the game—meaning you could be level five and wander into a cave filled with monsters that were level 30 and get killed in one hit. EXA seems a little more linear when it comes to free-roaming around, and while there are certainly areas that will tax a player's skills, they're never quite as merciless as they were in the previous game.

Visually, the game's pretty interesting. It has the typical fantasy environments and characters, all presented with the cel-shaded look of the first game. I've never been the biggest fan of cel-shading, but the results here are pretty nice. The game also boasts some elaborately designed anime-styled cutscenes. These definitely add to the overall charm of the game as a whole.

All in all, Shining Force EXA is a solid game that doesn't quite compare to its predecessor. The core of the two games remains relatively the same (focusing almost solely on the aesthetics of countless other hack-and-slash dungeon crawlers), but the inclusion of a second playable character (who's forced upon the gamer) and a Suikoden-esque series of castle defense battles brings things down a notch. Add in a slightly lower challenge level and it falls just a bit short of Neo. Despite this weakness, it's an entertaining and lengthy adventure whose charm overcomes most of its flaws. If nothing else, these new iterations of Shining Force prove that Sega can eventually take franchises in radically different directions and still make compelling games—but I still wish they'd give us another Shining Force strategy RPG…Rating: 7.5 out of 10

What a shitty review!It’s full of crap.

The GBA Shining Force was not it’s own game. In fact it was the very first game, redone, with add-ons. The extra story arc and new characters, combined with the updated system, made the game worth playing again. But it was, in no way, a new game.

Not to jump in on Mike B’s thread, but Resurrection of the Dark Dragon was a reissue of the original Shining Force from 1992. a great game if you’ve never played it (re-played it myself last year, it still holds up) but sadly… Sega seems to never do the obvious thing and just make Shining Force a SRPG again. = (

Wasn’t Shining Force: Resurrection of the Dark Dragon a fairly recent, all-new Shining Force SRPG? (On GBA, which has become a favorite SRPG platform, and hopefully the DS will follow in its footsteps fairly soon.)