Bring your demons to Show-and-Tell 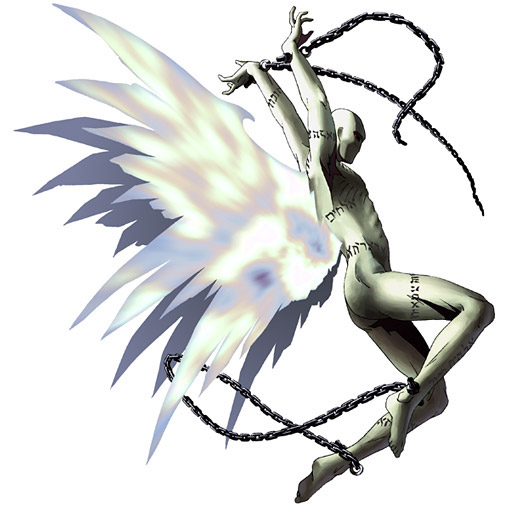 HIGH The new updates (both in terms of gameplay and aesthetics) are amazing.

LOW The difficulty level can be brutal.

WTF Japanese teenagers are surprisingly nonchalant about interacting with the supernatural.

I had the distinct pleasure of playing Revelations: Persona back when it debuted on the PlayStation. While the game wasn't perfect (in fact, it had a whole lot of issues) it's always remained near and dear to my heart. There were two main reasons for this: Persona and Suikoden were the first RPGs I played on Sony's new console, and Persona had a modern setting and horror elements (which was largely unheard of at the time). That second one was arguably more important than the first.

Persona was the starting point for my love of all things Shin Megami Tensei and really changed the way I looked at role-playing games. RPGs didn't have to be set in medieval worlds filled with Tolkienesque tropes after all. We all eventually learned that it (like some of the earlier Final Fantasy games) was a compromised and dumbed down version of what Japanese gamers got to experience (more on that later), but the game was so different in its aesthetics that I found myself not caring.

That being said, I've always wanted to play Persona the way it was meant to be played—with the higher difficulty setting and the excised footage restored—so I was especially happy when Atlus announced they were bringing gamers an updated version of the title on the Sony PSP. Now that I've had some time experience this new version (albeit not to conclusion), I'm reminded why I loved the game so much in the first place.

Persona on the PSP straddles a fine line between port and remake. Rather than re-imagine the original game (which is something Square loves to do on the DS) Atlus has instead chosen to take the original title, restore it to its former glory, yet give it a facelift in terms of presentation and design. If forced, I'd call this version of Persona an updating—it's the same classic RPG experience some of us had on the PlayStation, but it has been tweaked for modern gamers at the same time. 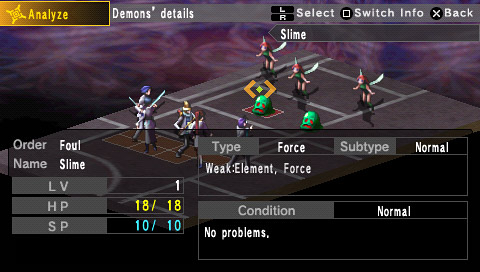 The story of the game, which revolves around a group of Japanese high school students who can use "persona" (essentially demons) in battle, is largely unchanged from the original. It's been over a decade since I last played Persona, but I remember enough of the narrative to realize that things here are basically the same. What's different is that Atlus has fixed everything that was changed in the original version back to the way it was in the Japanese game. Mark, for instance, is no longer African American. He's once again a Japanese kid. The localization is better as well—the majority of the original game's painful dialogue segments have been updated and the result is a much more somber experience.

Those changes are great—and if they were the only thing Atlus had done to Persona, I'd be pleased. They didn't stop there, though—they went the extra mile and restored the long lost Snow Queen Quest as well. The Snow Queen Quest appeared in the Japanese version of the game, but got the axe in the domestic release. It was a lengthy and challenging sort of sub-quest outside the main storyline (although I hesitate to call it a sub-quest—it was really large enough to be more than that in the grand scheme of the game) that involved a rumor first heard at the game's high school and eventually resulted in a long dungeon-crawling segment and loads of fights against tough-as-nails enemies. It's been fully restored in this release and American gamers can finally experience it for themselves. This is, in my estimation, the game's greatest selling point. Even if someone has already played Persona, this is an entirely new segment of the game.

The improvements don't stop there. This iteration of the game is much more difficult than the original. It comes with adjustable difficulty settings (even the easiest can be challenging…). The PlayStation release had a lower random encounter rate and enemies that dropped more spoils after each victory. That's been reversed in the PSP release and the game (which was never easy in the first place) is significantly more challenging than it used to be. Other additions and alterations are mostly cosmetic: the game's graphics have been upgraded (yet still retain their first generation PlayStation charm), some really nice animated cut-scenes have been included, and the game's score has been reworked in subtle and not so subtle ways. There's music from the original game in this updating, but it's been remastered. There's also a nod to the recent Persona games with the inclusion of J-Pop anthems not unlike those featured so prominently in Persona 3 and 4. I like the newly remastered classic cuts. I'm a little more mixed on the J-Pop. 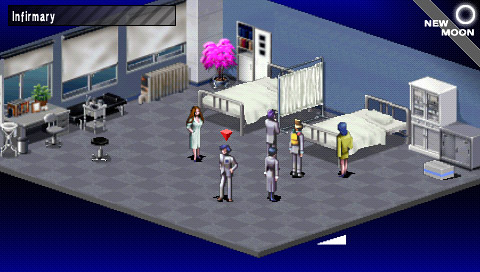 Other game elements are largely the same as they've always been—only with minor alterations to increase playability. Battles are much more fluid and streamlined thanks to interface changes that allow for automatic actions with fewer button presses. Another setting eliminates some of the battle animations. These are welcome changes to the experience because Persona requires the player to fight often. Anything that speeds up the combat is a positive. Engaging in conversation with Persona has also been adjusted for the better. Conversations now feature a chart wherein the player can see what sort of effect their conversational gambits are having on the demon they're trying to woo.

Another nice addition is the inclusion of more save points throughout the game. One thing the original lacked (much to my frustration) were regularly occurring save points. This often meant leaving my PlayStation on for extended periods of time while I had to do other things or stopping in the middle of things because there was no save point in sight. Naturally, since this is a handheld version, there's also a quick save feature.

All of these changes are fantastic, but there are still a few niggling issues that hold Persona back from perfection. First off, the game still features first person dungeons that are comprised of bland architecture. It's easy to get lost, although the auto-mapping feature does help a lot. There are also some loading times to contend with. They're not particularly egregious, but they are present.

Other than that, Persona on the PSP is a fantastic updating of a game that lots of folks missed out on. Most companies could learn from Atlus—this is how games should be re-released on different hardware. Persona takes everything that made the original so memorable (the demon-fusing, the storyline, the atmosphere) and streamlines/updates it while restoring things that were cut from the original as well. Here's to hoping Atlus can bring us a PSP version of Persona 2: Innocent Sin—a game that never made it here in any form—sometime soon. If it's even half as polished as this game is, I'd buy it in a hearbeat. Rating: 9.0 out of 10.

Parents: According to the ESRB, this game contains fantasy violence, language, partial nudity, simulated gambling, and suggestive themes. The game certainly earns its Teen rating—not so much for the content descriptors but moreso for the serious mood and tone. This is a game that's almost assuredly way too deep for most children.

Deaf & Hard of Hearing: You will miss out on the J-Pop and excellent soundtrack, but can keep up with the narrative since almost everything is presented with subtitles. The animated cut-scenes are lacking in this regard, but there don't appear to be many of them in the game.