Visit Tartarus for a Third Time 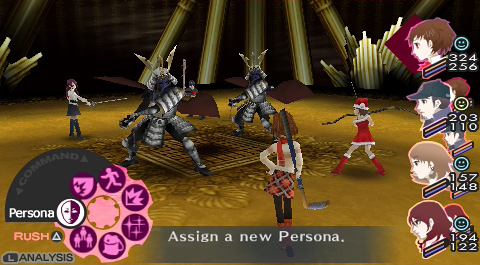 HIGH The addition of a female protagonist and new social links.

LOW Climbing the tower can still be a bit of a grind.

WTF Yet another RPG with a dog as a playable character. WTF Japan?

Shin Megami Tensei: Persona 3 Portable (P3P) marks the third time I've played through one of the more popular titles in the Shin Megami Tensei universe. You would think, after having played through the original game and the re-release with bonus content (entitled Persona 3: FES) that I'd be sick of this title—but amazingly enough, I'm not. When I said I'd write this review I told Brad "I've played this game twice already—I'll just run through a few hours to see what's different and write it up." Famous last words as my game clock will attest. That plan to spend a few hours on it has expanded into 40 hours of playtime so far.

This new release is the same Persona 3 many of us fell in love with on the PlayStation 2, only with some tweaks that make it portable friendly. Since I wrote extensively about the game back in 2007 (you can find the review here on the site) I'm not going to spend time talking about the story or gameplay mechanics—which are largely unchanged—but instead focus on what is new and different this time around.

The biggest addition to the portable version is the new female protagonist. Now players can choose at the start of the game if they want to be a guy—like in the original—or a girl. Since I've played as a guy twice before, I went with a girl for this review. Playing as a female is largely just a cosmetic change—it doesn't change the game's narrative. Persona 3 focuses a lot on "social links"—how you relate to other people in your town. As a girl, there are new social links to uncover and the whole dating thing flips because of the change in gender. Playing as a female may not change the main story at all, but it does make the journey to the end feel fresh thanks to these new interactions. If you played Persona 3 before and were annoyed you couldn't hook up with some of the fellas at your high school, it is now possible.

Another change is found in the title's navigation system. In shrinking P3P down to fit on a UMD, some concessions had to be made for space purposes. Now, instead of maneuvering the main character through 3D environments at school and around town, everything takes place on a flat 2D screen—sort of like a visual novel. Some purists have voiced displeasure at this change, but it honestly doesn't bother me. I can see the argument that some of the sense of immersion is lost in this new perspective, but it makes navigation faster and easier. Add that to the ability to now "jump" to different locations and a slightly refined way of returning to your previous floor in Tartarus and the game feels much more streamlined. Speaking of Tartarus, its graphical presentation is essentially unchanged—it's the same blocks of randomly generated dungeon floors leading to boss fights. 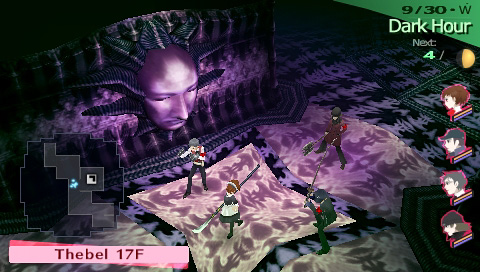 Other concessions that had to be made to fit the game on a single UMD include the removal of the console version's anime cutscenes—everything's now done on 2D backdrops with character portraits—and the removal of Persona 3: FES's The Answer segment. There seems to be some debate over why The Answer wasn't included—either it wouldn't fit, or Atlus listened to complaints that it was too much of a chore to play through and took it out. Either way, it's not here. That's a bummer because while it is a pain to play through, the story of it is really quite good.

Fans of the series will be pleased to know that there are new cameos from other Persona characters added in and that the battle system has been refined. The most frustrating thing about the earlier incarnations of Persona 3 was that players could only control the main character—and party AI was prone to making some baffling decisions in the heat of battle. This is still the default set up for P3P, but there's now an option on the interface wheel to control each character's actions manually. On the harder difficulties, this is essential.

Speaking of difficulties, this new iteration adds two new challenge settings: Beginner and Maniac. I spent a short amount of time with Beginner and found myself wondering who would actually play on this mode. Easy is simplistic enough, but Beginner essentially removes all challenge from the experience. Maniac, on the other hand, is something that only experienced Persona players will want to tackle. It's brutal and will make you its bitch regularly. I love the idea of difficulty settings in RPGs though, so even though Beginner is too easy and Maniac is insane, it's good to know that the options are there.

Truthfully, my favorite thing about the whole P3P experience is just how accessible they've made it. One of the deterrents to playing either of the earlier incarnations on the PS2 was the time commitment. Players could spend well over 100 hours traversing the game's story, maxing out social links and reaching the end of Tartarus. That's a long time to be glued to a television set. This new portable version is still a lengthy experience, but it's far more enjoyable because it can be played for a few minutes here and there then put back into standby mode while the player goes about his day. The opportunity for marathon sessions is still present—I can attest to that personally—but it's really nice to be able to pick it up, do a floor or two of Tartarus, and then get back to my life. That's something that never felt doable on the console versions.

Persona 3 was one of the best RPGs of 2007—and arguably one of the best RPGs of the entire last generation of console games. P3P tweaks everything a bit, but brings enough new elements to the final product that it warrants a playthrough from people who've already been through both previous releases. This release does a fantastic job of appealing to the core fans of the series while also making the experience accessible to a new group of players. If you've never played a Persona title and are curious but nervous about the difficulty and time commitment, this is your gateway drug. Pick it up and get hooked. Rating: 9.0 out of 10.

Disclosures: This game was obtained via publisher and reviewed on the PlayStation Portable.. Approximately 42 hours of playtime was devoted to single-player modes (completed 0 times) and 0 hours of play in multiplayer modes.

Parents: According to the ESRB, this game contains: blood, language, partial nudity, sexual themes, violence. While the game is rated Mature, I'm a bit puzzled as to why. There are dating elements and some of the persona are sort of naked, but it's not like people are having sex or there are "omg boobzzzz" all over the place. This game probably deserved a teen rating—and will be safe for most teenage gamers.

Deaf & Hard of Hearing: You'll miss out on the cool music and decent voice acting, but everything's subtitled so you can play without fear.

I guess my previous comment was a bunch of BS because I played through all of Persona 4 Golden on the Vita.

Persona 3 Portable is on sale so I guess I’ll get that too.

I used to feel the same way Spokker — but I really like the way you can play an RPG on a handheld without having to commit to playing it for longer periods of time. I’ve had some epic P3P sessions here at home, but I like that I’m not tied to my couch or one room. I find myself playing all over the place — and it’s really nice to be able to just run through a floor or two and turn it off. The console version wasn’t nearly as accessible for playing in short bursts. My only complaint… Read more »

I can’t imagine playing an RPG on a handheld. That’s something you’ve got to sink some time into, which is usually best in front of the TV, not the bus. And if you’re going to play a handheld at home, what’s the point?

I do like handhelds — lately I prefer them to consoles. My gaming attention span is very short these days, and it’s nice to be able to play for five or ten minutes and then shut it off and do something else. Handhelds totally allow me to do that, whereas with the consoles it’s barely worth turning one on for such an abbreviated session. This has been the most use my PSP has gotten since…I bought it. That should tell you this new version is pretty cool, but not cool enough to go plop down the cash for a PSP.… Read more »

Like you I also played both PS2 versions of Persona 3 all the way through (think I did the original twice actually, if I recall) yet even though my gametime clocked around 70+ hours each time I would love to play this game again on the PSP. There’s very few RPGs that I can say that about. My problem is that I don’t roll with handhelds at all; the last one I owned was a GameBoy Advance and even then it barely got used. If I did have a PSP this game would be a total must-buy though. Good review.… Read more »