The Holy Grail of JRPGs Finally Comes to America 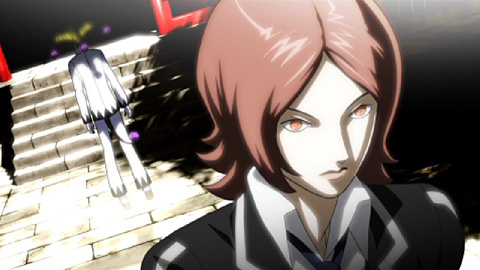 HIGH The game's story and characters are engaging and sure to hold players' interest.

LOW Battles can be very slow.

WTF How did they ever get away with calling the villain Joker? I guess no one told DC Comics…

—the companion piece to one of 1999's best role-playing experiences, Persona 2: Eternal Punishment. After nearly a decade of hearing the game would never make it Stateside (despite countless Internet petitions and pleas from Atlus fans), gamers who love role-playing games (RPGs) can finally experience the "lost" game in the Shin Megami Tensei series. The question is, was the wait worth it?

The short answer to that question is "yes." However, Persona 2: Innocent Sin has been one of the harder games to review during my 13 years of writing about the medium. It's an odd dichotomy—a game filled with interesting ideas and a weird and engaging story, but also a title overflowing with game mechanics that were better left in the distant past. What one gets out of Innocent Sin will depend on the person playing it. Those who don't mind a Japanese role-playing game (JRPG) with a relatively archaic battle system and some very basic graphics will find there's much to love about it. Those who prefer their titles with all the modern bells and whistles, meanwhile, will likely find the game to be a genuine slog.

The title serves as a companion piece to Eternal Punishment—featuring overlapping characters, locations, and plot details. This installment finds players taking on the role of Tatsuya Sou, a student at Seven Sisters High. When rumors that an individual known only as Joker is making people's wishes come true start to circulate, Tatsuya and two cohorts look into it. What they find isn't exactly pleasant and uncovering it makes up the bulk of the game. To say more about the story is to ruin one of the game's strongest points, so let's just leave it at that.

The rest of Persona 2 plays exactly like both an RPG and a game in this franchise. The game is set in modern times, so the dungeons are locations like a high school, a record store, and other real world locales. Battles are turn-based and menu-driven. Like the previous entry in the series, the characters can use demon familiars known as Persona to aid them in battle. They can also communicate with the demons they encounter in the wild, opening up opportunities to forge new alliances, earn demon cards, or gain other rewards. While later MegaTen games have refined this formula, Innocent Sin is old school Persona.

The bulk of the game is spent exploring various dungeons to advance the story, grind levels, or try to gather cards for forging new Persona in the Velvet Room. Unfortunately, each of these things requires extensive use of the game's battle system—which is one of the most dated aspects of the Innocent Sin experience. 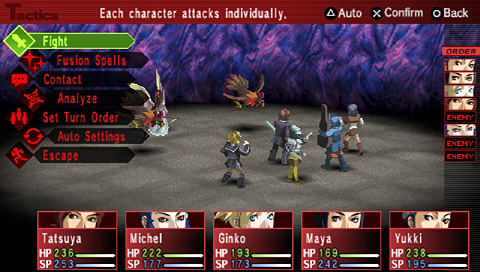 Simply put, the combat in Innocent Sin is staggeringly slow. The game does feature an "auto battle" and a speed up option (which removes battle animations) that's nice for when the player is just running about grinding levels against less dangerous enemies, but even then, fights last far longer than they should. Add in the demon negotiations (which often require multiple turns to complete—think of it sort of like the Draw system in Final Fantasy VIII) and the battles can drag on for what feels like an eternity.

The fighting itself isn't bad, though. Innocent Sin features a lot of different ways to dispatch enemies, including traditional attacks, Persona attacks, and fusion spells. The latter are vitally important and require a bit of experimentation to uncover. The rewards are worth it, though, as the increased damage of fusion spells makes many encounters easier.

Needless to say, with the game being 12 years old, Innocent Sin isn't exactly the kind of software you'll want to use to show off your widescreen PSP display. With never having played the original, a comparison between the two versions is impossible, but even if the graphics in the new version have been spruced up, there's no denying that Innocent Sin's visuals are hardly cutting edge. Character sprites aren't terrible, but everything has a sort of low-res, hazy look to it. I'll be the first person to say that graphics aren't really important in the grand scheme of things, but I do wish Atlus would have spent a little more time cleaning up the game's visual presentation.

What has been cleaned up is the game's audio—particularly the score. Players can choose between the original music for the game or a newly remixed version. The new music is really good, but so is the original soundtrack. Honestly, there's no bad choice in this regard.

Played off the UMD, Innocent Sin spends a lot of time loading. Enter a new area? Load. Open a door to enter a room? Load. Go into battle? Load. All games load—it's just that this one loads a lot and it's not particularly fast. However, installing the game will alleviate this problem in a pretty dramatic way.

As mentioned earlier, Innocent Sin is a hard game to review. This critique has spent a lot of time commenting on the game's flaws—but only because it seems like gamers who will really appreciate the title already know what they're in for. That being said, Innocent Sin is a really good game—but I can't help but wonder if we'd all feel even more excited about it if we'd been able to first play it back in 1999. Revelations: Persona benefited greatly from nostalgia during its PSP re-release, something Innocent Sin doesn't have working in its favor. Rather than feeling forgiving of its dated mechanics and visuals and simply enjoying the trip down memory lane, many will feel the need to compare Innocent Sin to modern games—holding all those things we'd overlook if we'd played it in the past against it. There's no easy answer to that question, but I can't shake the feeling that gamers would be more excited about this title if they had some sort of previous connection to it.

is a good game—for RPG fans who can accept it for what it is. After twelve long years of waiting, Persona 2: Innocent Sin certainly lives up to expectations and proves that its reputation as one of the gems of the previous generation of JRPGs was well deserved. Rating: 7.5 out of 10.


Disclosures: This game was obtained via the publisher and reviewed on the PSP. Approximately 54 hours of play was devoted to single-player modes (completed 1 time).

Parents: According to the ESRB, this game contains drug reference, language, mild Blood, sexual themes, simulated gambling, violence. Parents will want to take note of the Teen rating. Innocent Sin isn't really a game for children younger than the ESRB guideline, not only because of the content, but also because the game is text heavy and can be challenging.

Deaf & Hard of Hearing: Hearing impaired gamers can proceed full speed ahead. Innocent Sin is a text-based game, meaning all the story and dialogue will be readable on the screen.

Also, forgot to say that while Xenoblade is definitely a highly sought after title, people have been clamoring for Innocent Sin for over a decade. That definitely makes it more of a holy grail than a game just released this year.

Like I said, though, I just hope Xenoblade doesn’t go down the same path.

I’m with you there…stupid Nintendo.

Xenoblade Chronicles is where it’s at. Lets hope you’re not writing a similar article for this one in 12 years’ time.