A Blast from Mega Ten's Past 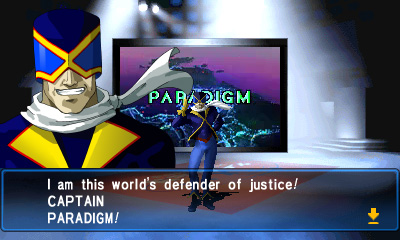 HIGH Finally getting some of the hard-to-catch demons to join your squad.

LOW Navigating first-person dungeons can be challenging, even with a map.

WTF This game is one giant WTF moment—in a good way.

Few people are happier than I am about Shin Megami Tensei (Mega Ten) finally becoming popular in America. As someone who's loved the series and its incarnations since the original Persona ate up a month of my life back on PSOne, it's nice to see a franchise that was once a tough sell to western gamers slowly becoming adored.

Atlus deserves extra kudos for being so diligent about growing the brand here in the States. The company could have just continued to bring out new titles as they're released in Japan, leaving the earlier entries as footnotes in the annals of great games that never made it to America, but the publisher has been completely dedicated to Mega Ten classics as well as the new stuff.

was originally released back in 1996 for the Sega Saturn, but this first-person dungeon-crawling role-playing game (RPG) never made it to America—until now. Ported to the Nintendo 3DS and updated ever-so-slightly for modern gamers, this piece of Mega Ten history is finally available to enjoy. Was the 17 year wait worth it? Generally speaking, yes, but fair warning: players who've only come into the Mega Ten universe with Persona 3 and 4 might be taken aback by the older stylings of Soul Hackers—it's certainly from an earlier era.

The game's story should be instantly recognizable to anyone who's experienced the series before—the usual merging of modern technology with the occult is present and accounted for, and it's interesting to note how eerily prescient Soul Hackers is when it comes to predicting the future. The tale finds players working as part of a hacker collective known as The Spookies, and they uncover some very strange things that coincide with the launch of the town's "Virtual World." To say much more would be to ruin one of the real draws of the Soul Hackers experience, but let's just say it all gets pretty out there…

Unlike the modern games, Soul Hackers features first-person dungeon crawling. While this feels antiquated by today's standards, it's not a huge detriment to the experience, although the dungeons themselves are rather nondescript in their design. 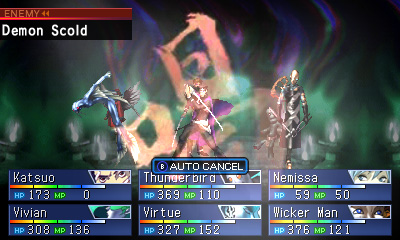 While exploring, players will randomly encounter demonic enemies. Fighting said demons rewards the player with experience and other goodies, but sometimes fighting isn't the best plan of attack. Like the earlier games in the Mega Ten franchise, Soul Hackers allows players to recruit demons to fight alongside them through a conversation system. Say the right thing to the right enemy at the right time and he'll gladly join your squad or offer you something of value. Each demon has a different personality and demeanor so there's a trial and error approach to the conversations, but it's well worth the effort as the recruited enemies not only become some of your best fighters, but they also act as essential ingredients in the game's fusion system.

The key to making stronger demons—outside of finding and recruiting them—is taking them and fusing them together. This has been a staple of the series for as long as I can remember, and honestly—it's so involved it could almost be a separate game of its own. The quest to find new demonic combinations and fusion fodder will eat up a lot of hours, but it rarely feels tedious.

The combat in Soul Hackers is relatively simple and menu-driven. I say relatively simple only because it's a traditional turn-based setup that should be instantly familiar to anyone who's played a Japanese RPG before. However, digging beneath the surface reveals a surprising amount of depth for a game from the 32-bit era.

It goes without saying that not all demons are created equally, but Soul Hackers really plays around with this concept by having the various moon phases affect behavior and by giving the demons varying levels of loyalty and intelligence. Because of this, there's a lot more nuance than you'd expect in the handling of your demonic partners.

Of course, all of this comes at a bit of a price. Like so many games back then, Soul Hackers isn't great at explaining how its various systems work. There are tutorials here and there, but they're brief and a bit random. Take, for instance, the first dungeon—which doesn't explain the demon negotiation system until you run into a specific enemy in a random encounter. Before hitting that, the game either assumes you already know how to talk to the demons or that you just don't need them in the first place. It's an archaic design that makes me appreciate some of the "hand-holding" modern games give us.

Like all Mega Ten games, Soul Hackers is challenging. Part of that challenge comes from trying to learn and master all the various game systems, and the rest comes from good old fashioned difficulty. It's entirely possible to die in a random encounter here—something that's become a series hallmark over the years. Soul Hackers isn't as brutally punishing as some of the other games in the series, but it will kill you when you least expect it.

certainly looks and feels like an RPG from a different era—but for me, that's part of the charm. Gamers expecting something along the lines of Persona 4 will need to lower their expectations a bit, because it's almost two decades old. Those who can accept Soul Hackers on its own terms will find an entertaining (if occasionally grindy and challenging) experience and Mega Ten completionists will certainly want to check this out. Rating: 7.5 out of 10.


Disclosures: This game was obtained via publisher and reviewed on the Nintendo 3DS. Approximately 52 hours of play was devoted to single-player modes (completed one time).

Parents: According to the ESRB, this game contains blood, language, partial nudity, sexual themes, and violence. It's odd to see an M-rated game on a Nintendo handheld, and I'm not entirely sure I'd say younger teens couldn't play this game, but it's definitely not something for the under 13 crowd. The story is involved, the game mechanics are deep, and there is some blood and partial demon nudity in the game. That being said, the M rating feels like a bit of a stretch.

Deaf & Hard of Hearing: Hearing impaired gamers can enjoy Soul Hackers with minimal concern. The voice-acted scenes come complete with subtitles so there's nothing to really miss out on other than the game's score.

I purchased a PSX and a copy of Persona: Revelations with the money I received from high school graduation back in ’97. Since then I’ve been a committed devotee of ATLUS — which makes the current travails of Index Corp especially worrisome. As curious as I am to sample Soul Hackers it will probably have to wait. The 3DS just offers TOO MUCH goodness right now — Etrian Odyssey IV, Shin Megami Tensei IV, Fire Emblem, to name a few — for me to give it its due diligence. Hopefully I’ll get to it one of these days. Great write… Read more »

Excellent review, Mike. I was really impressed at how topical the story remains. The story definitely has a nineties hacker vibe, but it doesn’t feel dated at all. I was also impressed by how much there is to do. I spent about ten more hours than you, about 62 hours not even counting the post game/New Game+ stuff, and a lot of that was spent messing around in the casino and experimenting with fusions. And I thought that the voice work and even the 3D touch up added a lot to the game. I think dungeon crawlers are a game… Read more »

Nintendo has it on the 3DS eShop for $30 through July 14th. Hmmm…the temptation is mounting.

The 3DS is really starting to come into its own with the RPGs right now. Really wish the Vita would follow suit.

Don’t hold off too long on snagging a copy of Soul Hackers — my guess is that it will become hard to find in physical form pretty quickly.

Thanks Sleeve! I could have probably spent another 20 or more hours with this game just messing around — it’s certainly packed with stuff to do and explore. I suspect I probably will at some point in the not too distant future. I’m with you on the dungeon crawlers benefiting from 3D effects — it certainly makes the gameplay (which I’ve always loved) feel a lot more accessible to the masses. The first person dungeons always give me fits (I’m directionally challenged in games — as anyone who’s ever tried to follow me to a destination in an MMO), but… Read more »