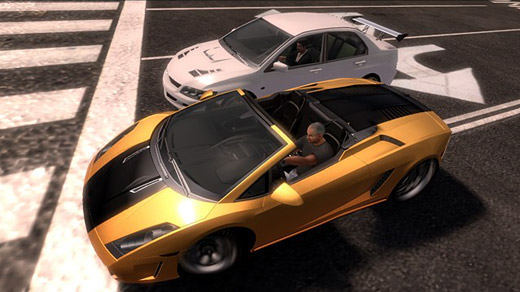 Midnight Club: Los Angeles is a lot like the women you see walking around on Rodeo Drive—very pretty, but pretty shallow, too. Even worse, like the biggest divas wandering the streets of Hollywood, Rockstar's racer can be very demanding of its suitors—the game asks players to accept a lot of annoying design decisions while reportedly making it "easier" to keep progressing through the story despite the player's skill level. All I can say is that if this is easy, then thank Christ no one gave me the earlier games to review. I'd have no hair left.

In the spirit of fairness, I'm not a racing game connoisseur, and when it comes right down to it, I'll play a lot of other types of games before I'd pick up a racing title. I like to play the occasional racer, but I'm not someone who salivates at the release of a new Gran Turismo or counts down the days until the next Burnout hits. That being said, I may not know how to best use the NOS switch or care about finding the perfect gear to enhance my ride, but I do play enough to be able to figure out how to find a good line and make a turn. Even with those skills, Midnight Club: Los Angeles proved to be more frustrating than fun.

The problem lies in the game's A.I. The drivers in Los Angeles are god-like in their ability to weave through Los Angeles traffic without hitting anyone,  they're able to recover almost instantly any time they rarely do make a mistake, and they rubber-band to close in on the lead even when they're so far out of the race that they no longer appear on the mini-map. The A.I. simply doesn't make mistakes, which requires the player to pull off an almost perfect run if they want to have a shot at winning. Perfect runs make sense for the game's more difficult red level races, but the greens and yellows? Those are supposed to be easy.

Adding to the cheap factor is the title's racing map system. Whenever the player is in a race, the game offers up yellow markers that highlight the path and give players the next turn. These work fairly well on the green and yellow level races. As the race levels progress, the game decides that it would be far more interesting to space the markers farther apart, around corners and in out of the way places. Because of this, players will miss turns because it's difficult to keep watching the road and L.A. traffic while trying to squint at a mini-map in the corner of the screen. Missing a turn is a great way to go from first place to last in the blink of an eye. 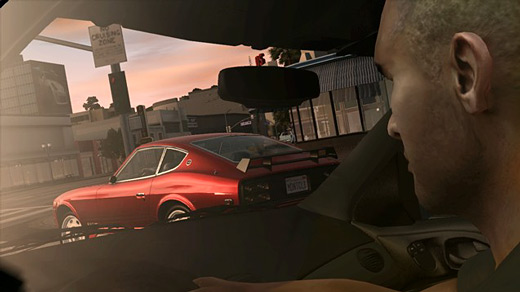 The game's other glaring flaw is in its decision to include a story. I've no idea who decided that racers needed stories, but they were wrong. Midnight Club: Los Angeles has the same story that every other racer of the past decade has: a douchebag driver from out of town comes to the big city. He has to start racing even bigger douchebags to make a name for himself. The end. See? It's a stupid story in the first place, so why even bother? Everyone in Los Angeles is an annoying asshat of the first order. The main character is such a doofus that he makes Justin Long and Shia LaBeouf seem cool. What passes for dialogue and witty banter is equally painful.

Less of a design shortcoming and more of a bad decision is the inclusion of the police. Cops patrol the streets of LA and pretty much everything the player does will draw their unwanted attention. At first, I thought this was cool—it gave off the old Need for Speed vibe. Unfortunately, the cops in Los Angeles are just brutal. They never stop pursuit because it's so hard to lose them—they can see through walls. I was literally blocks away from the nearest pursuer in downtown LA with buildings between us, and he still kept coming. When I just want to get to a race point, these ten minute chases quickly become annoying.

That being said, not everything here is bad. Players into the whole car customization thing will find a lot to enjoy in Los Angeles's various auto garages. Cars can be customized in a staggering number of ways (including the interiors—which are hardly ever even seen). Options range from cosmetic upgrades (bodykits, paint jobs, rims) on through to performance enhancers for the gearhead crowd. The performance upgrades never reach the level of Gran Turismo (thank God…), but there are things to look at and tweak.

The virtual recreation of Los Angeles is pretty spectacular too. As someone who's been to LA a few times, I could find places in the game that I'd actually been to. It's not a 100% recreation of the city (which would be rough since LA seems like it never ends), but what is there looks fantastic. Even more impressive is the fact the game rarely loads—driving around the city itself is amazingly seamless. Players can race from one side of the map to the other with no loading or even slowdown. The game is quite beautiful in this regard.

I know I've been harsh on Midnight Club: Los Angeles in this review—and it was justified. The game certainly has its fair share of issues, some of which were nearly gamebreaking for me personally (the A.I. especially). Truthfully, though, each of the flaws is countered by something else the title does right—the game is really pretty, it offers a ton of things to do in terms of race types, missions, and so on, and there are a lot of cool cars to customize between events. The positives don't cancel out the negatives, but they do provide at least a bit of a counter. Patient racing fans will find things to enjoy, but everyone else should weigh both the game's pros and cons before making a final decision on whether or not this one is worthy of a purchase. Rating: 6.0 out of 10.

Disclosures: This game was obtained via publisher and reviewed on the Xbox 360. Approximately 22 hours of play was devoted to single-player modes (completed 0 times) and 0 hours of play in multiplayer modes.

Parents: According to the ESRB, this game contains mild suggestive themes, mild violence, strong lyrics. Midnight Club: Los Angeles mostly earns its T rating from the game's soundtrack and not from the core game experience. Some of the game's songs are filled with questionable language that some parents might find objectionable. There are a few suggestive themes hinted at in the game's lame banter, but I didn't find it worse than what you'd find in the standard PG rated film.

Deaf & Hard of Hearing: No worries here—hearing impaired gamers can experience every line of cheesy dialogue thanks to the subtitle option in Midnight Club: Los Angeles's game menu. They will, however, miss out on the soundtrack.