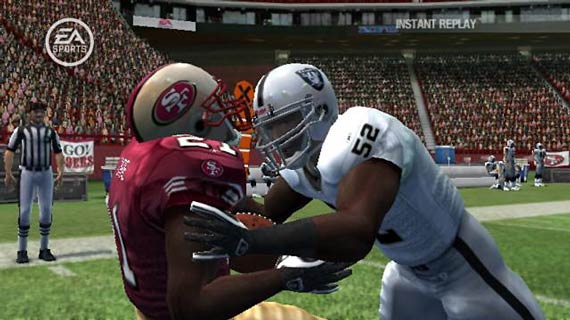 If the dog days of summer are nearing an end and kids are heading back to school, it can only mean one thing in the world of videogames: the new Madden is about to come out. The annual football release from EA has become a staple of the gaming calendar—the one week of the year when hardcore fans and guys who buy one game a year all wind up at the local Gamestop to get their fix. I have to admit, I've never been the hugest videogame football fan. I've played a lot of Madden over the years (and had experience with the other major series before EA got the NFL exclusivity rights), but I'm not one of those guys who plays each year's release. In fact, looking over my Madden collection is sort of like looking at the fossil record of videogame history—I tend to only buy a new Madden release whenever a new console launches, then I don't buy it again until the next generation begins.

For whatever reason (probably because I didn't get a Wii at launch), I missed out on Madden 07's Wii debut. That didn't stop me from taking a stab at the 08 iteration, though, which intrigued me because of the utilization of the Wiimote controller. How does the inclusion of motion-sensitive controls work? Is the game the buggy mess that others have claimed? Let's fire up the old telestrator and take a look.

Perhaps the first thing that becomes apparent after starting Madden 08 on the Wii is that it isn't nearly as pretty as the other next gen versions. It does look nicer than a GameCube title, but when compared with the 360 or the PS3, this version is clearly the ugly stepsister of the bunch. This is not to say that looking at the game will cause your eyes to bleed—but it doesn't look as sharp or as vibrant as the other versions. Despite this, the players are still comprised of lots of polygons and animate well. Stiff arms look like they could rattle the jaw of an elephant, there are some explosive hits, and catches on slant routes look good as receivers never break stride in the process of snagging the pass. The battles in the trenches are still a bit of a mess (it often looks like two different colored stacks of polygons are just running into each other), but that's always been a part of Madden. 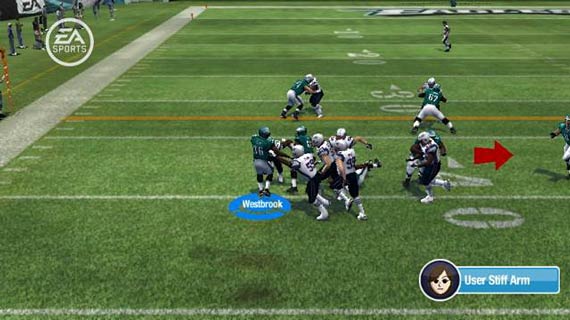 Enough about that, though. What everyone really wants to know about is how the game plays with the motion-sensitive Wiimote. After spending a lot of hours with the game, I can tell you that it's a bit of a mixed bag, at least until you spend several hours with it getting the hang of coordinating the remote and nunchuck setup.

On the one hand, it's a really neat way of playing football. Flicking your wrist to pass (and with different flicks leading to bullet passes or soft lobs) is very cool. Moving the controller or the nunchuk to activate big hits and stiff arms works well too. Using the D-pad on the Wiimote to select a receiver on a route…that doesn't work so well. It's not that there's a problem with the idea of using a direction on the D-pad to select a receiver—it's the fact that the D-pad is in a place where it's very hard to reach with your thumb on the controller. Maybe I have a short thumb or something, but I often found myself having to slide the controller around and actually look at it to select the right receiver. In some instances, it was just easier to use my left hand, which was already holding the nunchuk. Because of this issue, Ben Roethlisberger took a lot of sacks as I tried to pick my receiver and hit him before the defense swarmed me.

The other complaint I had is that there's a bit of a learning curve to overcome with Wiimote. Maybe I'm just used to playing with a standard controller or something, but trying to remember to wave the controller one way for a big hit, another way for a stiff arm, waving it up and down to jump, etc. made me often feel like a spaz playing a game of Simon Says orchestrated by a dude on a three-day meth bender. I had to keep the curtains closed here at Casa de Bracken whenever I was playing—I didn't want the neighbors to see me jumping around like a moron. 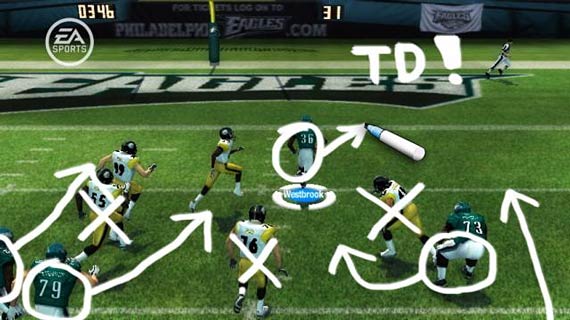 The other problem I had with the controls was in the kicking game. I'm sure it was just me, but trying to get Jeff Reed to actually kick a ball with anything close to full power was a skill I hadn't mastered even after hours of playing (and trying the kicking tutorial repeatedly). I missed some easy field goals and gave other teams great field positions on kick-off because of this. For whatever reason, the Wiimote never felt very responsive when trying to start a kick—so I'd invariably wind up flailing the thing around to get it to activate and it would then let me kick a nice 15 yarder or shank one out of bounds…

Despite these problems, I think playing with the motion-sensitive controls was generally fun. Playing on the simple setting (which utilizes only the remote controller) is quick and easy to pick up. Adding the nunchuk takes things to another level (and is definitely the way to go in the long run). Passing is great fun in particular, but so are blowing guys up on defense, swatting to force fumbles, and giving a guy a forearm shiver that will have him spitting out teeth on the sideline—provided you can actually acclimate yourself to using the remote and nunchuck combo. Expect the first few hours to be rough going as the control scheme definitely takes some getting used to.

Gameplay is essentially what you would expect—this is American football and Madden does it well. Sure, things have gotten a little sloppy since they've become the only licensed game in town (there are some glitches in the game—a quick check of YouTube will show you some of the best), but overall the game is still a quality title. I will admit that I'm a little surprised to see that this title really favors running the ball over passing. Players can stand in the pocket and be the gunslingers of days of old, but in my time with the game, I found that running the ball with a solid ground attack was far more effective. 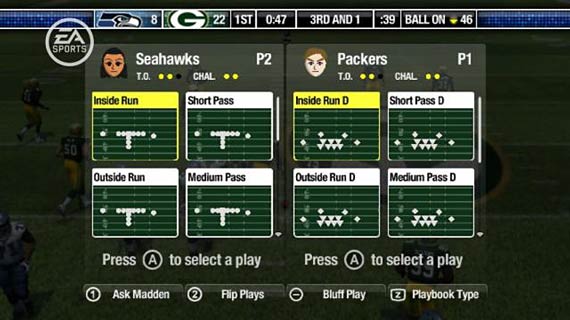 Another thing that bugged me to no end is that this game doesn't have a single season mode. I'm not sure when they took this out of Madden, but it seems absolutely boneheaded. If you want to play an actual season of the game as your favorite team on a quest to win the Super Bowl, you have to choose the Franchise mode and skip over a bunch of extraneous crap. I just want to play a season, man, not set the hot dog prices at the stadium and worry about my salary cap space.

If you get tired of Franchise, you can always play a bunch of the mini-games designed to teach the controller basics and give you points for completing objectives. There's a robust create-a-player mode too. For those who like to play against others, there's online play as well.

While this newest iteration of Madden still has its share of problems (the occasionally wonky A.I., a penchant for going on binge with certain penalty calls—I had a game where there were four 15-yard facemask calls in a quarter, then it wasn't called again for three days—and a few minor control issues), the game seems to be moving in the right direction as a whole. After a few seasons where people actually preferred the last gen version over the game on newer consoles, Madden 08 on the Wii provides a taste of what gamers can expect in their football simulation over the next few years. It doesn't re-invent the wheel, but it does provide a solid football experience. Rating: 7.5 out of 10

Disclaimer: This review is based on the Nintendo Wii version of the game.

This review hits the reasons why I haven’t bought into the hype that Nintendo is reinventing the wheel of video game control. I don’t really see how motion controls are supposed to be easier to use or more “accessible” or whatever when you still have the same number of commands. Now, instead of “push that button” it’s like, “shake the nunchuck side to side” or whatever. You still have to memorize a lot of different controls, and honestly it’s probably harder to master wiggling a remote at just the right angle than it is to just press a button.