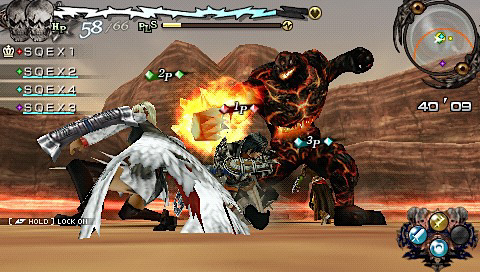 HIGH The game didn't crash once on me in 40+ hours of playtime. Hurray!

LOW Tedious boss fights that feel like they're more based on luck and memorization than any kind of skill.

WTF The game doesn't have cooperative online—it is still 2011, right?

While Capcom's Monster Hunter series remains a cult-like phenomenon here in America, the games are huge in Japan. So, it's only natural that other Japanese developers have attempted to cash in with their own clones of Capcom's franchise. We're only a few months into 2011, but we've already seen two new titles released hoping to lure monster-hunting maniacs into the fold—Lord of Arcana

and Gods Eater Burst. Today we'll be taking a look at Lord of Arcana, a game that proves recreating Monster Hunter's success is no easy task.

Like its inspiration, Lord of Arcana is designed to appeal to a niche audience of hardcore gamers who find infuriatingly challenging games with loot whoring elements fun. As a card-carrying member of that fraternity, I was really looking forward to seeing what developers Access Games had in store for players brave enough to take a chance on a brand spankin' new IP. Unfortunately, the answer seems to be headaches, bad design, repetitive combat, and a story best described as "non-existent." This is a title that apes all the superficial elements of Monster Hunter without ever managing to recreate what truly makes that series so memorable. To put it mildly, the game is a huge disappointment.

Players begin the lengthy, and frequently aggravating, quest by creating a character. Options for character creation are serviceable if slightly underwhelming given the dearth of real customization options. It probably doesn't matter, though, because players will spend most of their time with this game staring at their character's ass. This makes you wonder why they didn't include some kind of rear-end modifier in the character customization menu…

Kidding aside, players will then jump into the game proper. Like Monster Hunter (which will be a common refrain in this review since Lord of Arcana isn't really interested in breaking away from that franchise), players will navigate their character through a hub town where they can buy equipment and take on quests. Sounds good so far, right?

The game doesn't really start to fall apart until the player starts tackling missions. These quests find you guiding your character through a small area fighting monsters in order to collect X number of berries or kill Y number of this enemy. That's cool and all, except that the combat engine is very underwhelming. Fighting standard enemies in Lord of Arcana is an exercise in mind-numbing tedium because there aren't a wide variety of monsters and those creatures all tend to employ the same attack patterns. Goblins, for instance, telegraph their every attack. After about ten minutes, players will realize that when the goblin they're fighting starts to do his little dance, it's time to either block or move out of range. After 20 or so hours, this becomes boring beyond description. It doesn't just apply to the goblins, either —every standard monster in the game has a predictable pattern and once the player has memorized it, it's possible to go through fights without ever taking damage. 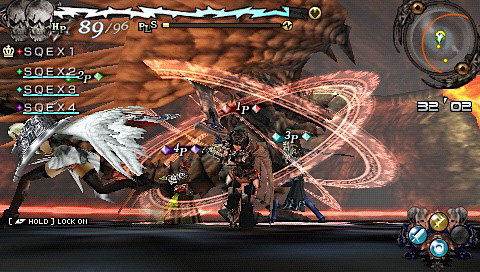 Boss battles don't fare much better—except that they're longer and even more tedious. The large scale encounters in Lord of Arcana highlight the fact that Access Games doesn't really understand what makes Monster Hunter so compelling. Boss fights in Capcom's series are white-knuckle affairs involving legitimate strategy and precise execution. Dying in Monster Hunter sucks, but good players know it's a necessary evil—every encounter provides the player with a learning opportunity to take into the next battle. Lord of Arcana, on the other hand, replaces genuine challenge with gimmicks and poor design. Beating a boss in this game never feels like the result of skill, ability, and knowledge merging—mostly it just feels like getting lucky and surviving a war of attrition. Victories in this game are often best described as Pyrrhic.

That's bad, but what's even worse is the game's lack of an online mode. Lord of Arcana's boring battles might be at least a little more tolerable with friends (if nothing else, at least they'd be over quicker), but since there's no online mode, the only way players can recruit three more people to the cause is to meet up with three friends with a  PSP and a copy of this game. I took statistics in college, but I'm not even going to ponder what the astronomical odds of that event actually occurring are. You probably have a better chance of being attacked by a shark while buying a winning Super Lotto ticket and enduring a direct hit from a lightning bolt—at the exact same instant.

The shame of all this is that Lord of Arcana could have been good. The Monster Hunter formula works really well, but even that franchise has flaws that a new series could address and improve upon. Lord of Arcana doesn't bother worrying about any of that though—not when it's so busy messing up things Monster Hunter already does perfectly. If the tedious combat and lack of online play didn't put you off this game, maybe the mediocre graphics, constant loading screens, the raging case of "claw hand" you'll develop from the awkward controls, or the fact that combat takes place in a weird circular arena instead of the actual environment will. If none of that does the trick, then Godspeed, my good man.

Clearly, the guys at Access Games understand that games in the Monster Hunter vein are supposed to be punishingly difficult. What they didn't get was that the soul-crushing challenge should come from the gameplay and not poor design decisions. Throwing down your PSP in anger because a boss has outsmarted you is acceptable. Tossing it aside because a fight revolves more around beating the bad game design than the actual enemy is not. Sadly, there's a lot more of the latter in Lord of Arcana

… which is why you should just play Monster Hunter—even with its problematic camera—instead. Rating: 3.5 out of 10.

Disclosures: This game was obtained via publisher and reviewed on the PSP. Approximately 42 hours of play were devoted to single-player modes (completed 1 time) and 0 hours of play in multiplayer modes.

Parents: According to the ESRB, this game contains blood and gore and violence. Maybe I'm really jaded, but I don't see why Lord of Arcana earned a Mature rating. Yes, you run around killing mythical creatures with your sharply bladed weapon of choice, but it's not exactly like you're dismembering creatures and bathed in blood when it's all said and done. I'm at a loss as to why the ESRB would think you needed to be 17+ to play this game. I'd let my teens play it without hesitation. Okay, there would be hesitation, but not because of the content. I try to steer my kids away from games that aren't a lot of fun.

Deaf & Hard of Hearing: Lord of Arcana comes with full subtitles, so you'll never miss a moment of the story. The aural presentation in the game largely feels like an afterthought, so it's not as if hard of hearing gamers will miss out on much by not being able to listen to the music or sound effects.

…because I could write a novel. But I just wanted to chime in and say the story was excellent, if vague in places, and the soundtrack was, for me, the best I’ve heard since FF VI, and for me, that’s high honors.

Also, the part where Weiss talks to the dove with the ridiculously god-like voice, for entry into the Shadowlord’s castle? Awesome.

Forgot to add, I loved Nier too. One of my favorite games of last year for sure.

Thanks for the great comments — Lord of Arcana is a game I really wanted to like, given that I’m a big admirer of Monster Hunter. In the end, I think my love of MH almost works against LoA, if only because it’s so hard to play LoA without thinking about MH and the things it does better. It falls in this weird niche now — definitely works for people who find MH overwhelming, although I kinda tend to think that Gods Eater fills that slot better. It really comes down to personal preference though — and I can see… Read more »

…and I’m not surprised you did either, Mike, but I loved loved loved Lord of Arcana. I sunk 130 hours into it, and only on the top tier level of extra unnecessary missions did I call it quits. Some thoughts: 1. The lock on was a huge improvement over Monster Hunter, and meant you NEVER needed to use the claw. 2. The music was pretty damn awesome in places. 3. I found the boss battles to be a combination of grinding levels/equipment and memorization/skill. Worked for me. 4. I think people exaggerate about the graphics being poor. There are some… Read more »