A legacy worth exploring 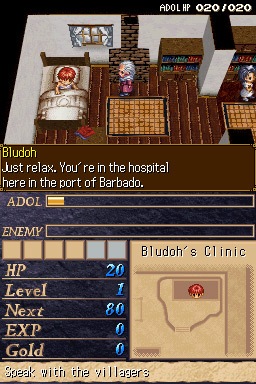 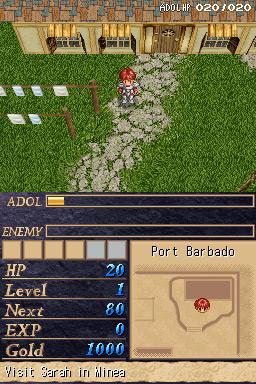 HIGH Getting to finally see how Adol Christin became a cult icon in the world of gaming.

LOW Wandering the temple at the end of Ys II for hours on end because it's so easy to get lost.

WTF Half of the items you find in the game are useless unless you're bored and want to screw around. I never once found a reason to use "magic of stop-time".

When you've been playing games for as long as I have, nostalgia is an inevitable and occasionally dangerous thing. It's easy to look back at games past with rose-colored glasses and recall only the good things while subconsciously ignoring the bad. Even more troublesome is when the nostalgia springs not only from the game experience, but also from external factors (what was happening my life at that time, etc.). I get all misty-eyed thinking about Final Fantasy not because it's a particularly good game (a fact that all the re-releases of it have driven home like a stake through a vampire's heart) but because I spent a few weeks of the summer between my freshman and sophomore year of high school playing it incessantly with a very good friend. For me, games are the equivalent of favorite songs—some people hear a tune on the radio and are transported back to the time when the song was important to them. They remember where they were or what was going on in that span of their life. I have the same feelings about music (Eric B. and Rakim's Paid in Full takes me back to a great summer in 1986 when I started to feel less like a kid and more like a young adult), but games have an even stronger emotional link for me. I suspect, as this generation of young adults gets older, they'll feel similarly. My age group is really at the forefront of the whole "we've been gaming for our entire life" movement. We're the pioneers in this regard.

My own personal list of games that inspire this strong emotional response is lengthy (Super Castlevania IV, Symphony of the Night, Phantasy Star Online, Ninja Gaiden on the NES, Chrono Trigger, and Final Fantasy XI…just to name a few) and the reasons are endless (and very personal and probably boring). I'd argue that most of these games are still good—it wasn't all just nostalgia that makes me remember them so fondly years later. But, there's definitely a judgment-clouding aspect to the events surrounding some of these games that makes me value them more than I should. Chi, Brad, Tim, and I talked about Streets of Rage and River City Ransom on a recent podcast and wondered if you "could go home again" when it came to these old titles that we once loved. The answers were mixed. I think you can go home again (I've done it literally and metaphorically recently), but I'd also add that while home will always be welcoming and filled with fond memories, there are also parts of the past that should stay in the past. This doesn't make it impossible to go back to what was once loved and love it again, but instead is a more cautionary note about how even when we think we aren't changing, we—and the world around us—are. 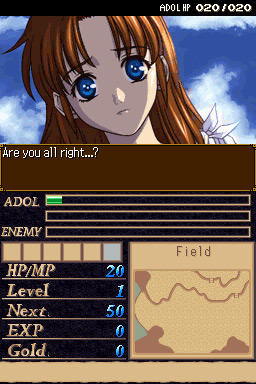 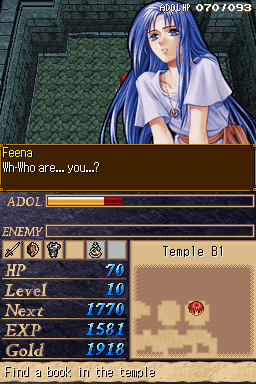 Legacy of Ys: Books I & II pronounced like "ease") on the Nintendo DS is essentially proof of my thesis. A compilation-slash-updating of the first two adventures of legendary red-headed adventurer Adol Christin (which originally appeared on the Turbo Duo), the title fed my sense of nostalgia for old school action-RPG mechanics (unfortunately, I never got to play the original versions of the game) not unlike those found in The Legend of Zelda. At the same time, the two games also reminded me of some game design mechanics that were once popular but should now remain examples of "how things used to be."

The cart features both Ys and Ys II, two titles interlinked narratively yet also independent enough to work as standalone experiences. The stories are a quaint reminder of what used to pass for video game plots. Adol washes up on a beach, then goes on a quest that sends him to a giant tower in the first game. In the second, he continues on from the tower, through several more towns, and to a giant temple before confronting a man in a black cape. There's certainly more to it than that, but not much. Ys is a series from a different time—a time when any storyline at all was impressive. To be fair, it's never as shallow as the first Final Fantasy (which is absurdly simplistic in light of today's titles), but RPG fans who play the games for story over everything else will be in for a bit of surprise. The game may be updated, but the tale remains as simple as ever.

To get the true Ys experience (for better and for worse…), one has to head out into the field or inside a dungeon. Ys is mostly about combat, which is funny, given how antiquated the combat often seems. Legacy updates the title in this regard (replacing the old system that required players to ram enemies with Adol repeatedly and hope for the best) with the ability to actually swing a sword (albeit a sword so short that it often feels like players are still just ramming enemies and hoping for the best…). It sounds awful—but it's not that bad. The sword is short, but once players get used to the distance element and timing the swings, the combat becomes manageable—if not particularly deep. Ys II flips the script a bit by giving Adol magic. Rather than ramming everything in sight with the sword in the second game, players instead blast things with fireballs. This makes the sword relatively obsolete but also makes Ys II feel a lot more polished than the first game. 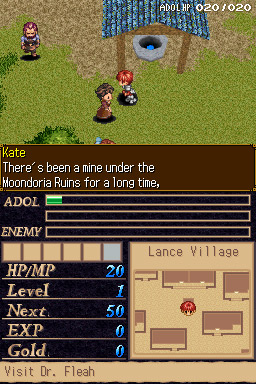 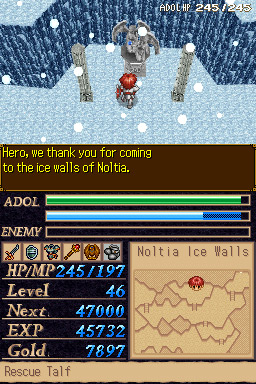 The problem with Ys II is that it brings back one of the banes of my existence from the 8-and-16 bit eras—the dungeon maze that requires players to basically map a path. The DS version seems as though it tried to eliminate this archaic game mechanic by supplying actual area maps on the bottom screen, but the temple that makes up the last four so hours of Ys II is a seemingly endless area of blocked paths, doorways that lead in circles, underground tunnels, and more. I spent ten hours finishing the second game, and I bet three of it was spent just trying to recover from being lost. Things are certainly easier if the game is played in large chunks, but I had times where I had a day or two between play sessions—and that meant even more being lost. I'm glad this particular element of RPG design is a part of the past, because spending a few hours with it now inspired moments where I wanted to toss the cart out the window.

If players can get past that, they're treated to a lively (and lovely) updating of a game that few of us ever got the chance to play when it debuted. The new graphics are detailed, yet retain a fair amount of old school charm (although not quite enough to avoid alienating some of the games' hardcore fans…), the new script is serviceable (there's still no real story here but it tries) and the music is pleasant if not entirely memorable. Atlus should be commended for bringing something like Legacy of Ys to gamers. Yes, this is a niche title—but it's good to see that gaming hasn't devolved to the point where only sequels to big budget games are released.

So, if the question about Legacy of Ys is "can you go home again?, then I'd say the answer is yes. It's always fun to take a stroll down memory lane and see where gaming was back in the days when it was still a cult-like hobby with a very negative social stigma attached to it. And, to be fair, the trip back to the conventions of gaming eras past is generally fun. There are things that I'm glad we've moved away from, but it's also refreshing to see that what was once a good game is still fundamentally the same even though nearly two decades have passed. If nothing else, Legacy of Ys proves that revisiting your roots (or exploring them for the first time…) is a trip well worth taking. It's hard to know where we are if we forget where we came from and how we got here. Rating: 7.5 out of 10.

Disclosures: This game was obtained via publisher and reviewed on the Nintendo DS. Approximately 16 hours of play was devoted to single-player modes (completed 1 time).

Deaf & Hard of Hearing: Hearing impaired gamers will miss out on Ys's excellent score, but nothing else. The game features no voice acting or aural cues of any kind. The story is presented entirely in easy to read text.

Thanks–glad you enjoyed the review.

I didn’t dislike the music in Ys on the DS–it just didn’t exactly blow me away. I believe people who’ve played the original version have commented that the music in this version isn’t quite the same or as good. I have no basis for comparison, though, unfortunately.

I actually own both of those PS1 Lunar titles and love them to death. Just talking about them makes me nostalgic…

Just wanted to say thanks for the review. I don’t own a DS and will probably never play this game, but I do remember borrowing a friend’s TG16 just so I could play Ys I&II and I remember it fondly. It is interesting that you mentioned listening to songs being a trigger for nostalgic feelings. My memories of Ys I&II were that the music was the best part of the game and far surpassed most other titles out there on consoles at the time. It *was* on the TG16’s CD system so I’m sure that had something to do with… Read more »