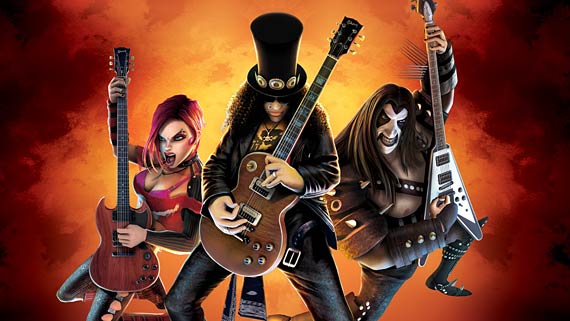 For proof that Cinderella stories can happen even in the world of videogames, one need look no further than the Guitar Hero franchise. When the series started a few years back, it was an almost off the radar game that only the most hardcore rhythm game fanatics were following. Sure, it looked pretty interesting (anything with a unique controller fascinates me—which is why I've got that monstrous Steel Battalion controller still taking up space in my living room), but it seemed almost destined to be a niche title with a cult following (sort of like Guitar Freaks and Taiko Drum Master et al). But then, something magical happened—the fairy godmother of rock and roll showed up and sprinkled some magic dust on the game and those who played Guitar Hero couldn't stop talking about it. They told friends, they got them to play and got them hooked, they posted on message boards. Game critics raved. Soon, this little game that looked like it was destined for cult game obscurity was impossible to find in stores. Next thing you know, even the mainstream press was talking about it. Guitar Hero was about to become a pop culture phenomenon.

Flush with success, a second game came out and the franchise expanded to include the Xbox 360. The second title reached an even wider audience—and the little game that could became a bonafide hit. Now, Guitar Hero has become a gaming juggernaut. The most recent game, Guitar Hero III: Legends of Rock, had a midnight release (something reserved for the biggest games only—the Maddens and Halos of the gaming universe) and after a week in stores has already rung up 100 million bucks in sales for Activision. What is it about this franchise that gets even people who don't play videogames to strum a plastic guitar for hours on end? And more importantly, does Guitar Hero III improve upon the experience offered in the first two games (and the expansion pack) or does it settle for merely maintaining the status quo?

The answer to that first question is mostly a matter of perspective. However, I think the key to Guitar Hero's ever-increasing popularity is attributable to these things: it makes players feel as though they're really playing guitars and making music, it's accessible enough that anyone can pick it up and play, but it takes tons of practice to master the game on the highest settings, and most importantly, it's fun. Pretty much everyone has wanted to be a rock star at some point in their life—even if they don't play a musical instrument or can't sing (look no further than American Idol for proof of this). In the world of rock music, no member is more mythologized than the guitar player. Guitarists are likened to Wild West gunslingers, called things like "axe-men," and given an almost deified status in the world of music (although maybe deified isn't quite the right word—rock and blues lore is filled with stories about guitarists who made deals with devil to improve their skills). Picking up Guitar Hero is like getting to be Jimi Hendrix without having to practice the guitar for years on end. Playing it creates the illusion that the player is making this magical music—and through proxy, is tapping into a life that we could never live on our own. In a lot of ways, that's what all good games should aspire to. Of course, if this is all a little quasi-philosophical and mystical, you can always fall back to the old standby: the game rocks, and rocking out is fun. 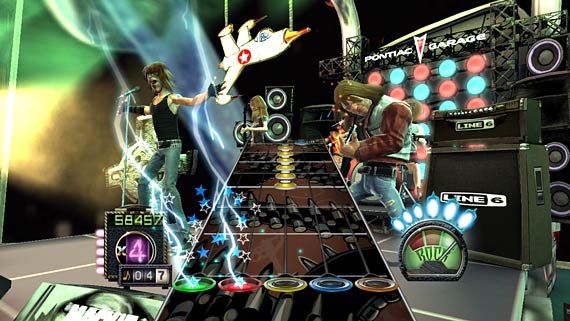 Guitar Hero III continues this trend and while the game is essentially unchanged from earlier iterations, new developer Neversoft has tweaked the formula a bit. Players will still strap on their axe, select an avatar, name their band, and set out on the path to rock godhood, but there are bosses along the road this time. At certain points in the career mode progression, players will be challenged to a guitar duel with guys like Tom Morello and Slash. These battles are sort of like "dueling banjos," only with devious little tricks and power ups thrown in to make it tougher. Snagging one of these power ups (which can make notes flash on and off, make a "string" break on the guitar, double notes, or increase the difficulty amongst other things) is the key to victory—using them on your opponent will make them miss notes. If they miss too many, you win. Of course, they can also use these things on you, so you not only have to pay attention to what's happening on your side of the screen, but also what they're lining up for you. Overall, the boss battles are entertaining, but they're not something that changes the game experience in any real meaningful way.

Aside from the boss fights, the rest of Guitar Hero III is business as usual. This isn't a bad thing, though, because as the old adage says, if it ain't broke, don't fix it. The core gameplay still revolves around rhythm, timing, and hand-eye coordination. Colored "notes" scroll down the board and when they reach the circles at the bottom, players must push the corresponding "fret" button on the guitar while strumming it as well. Hit it right, and the game produces the sound. Miss it, and you'll hear the "plunk" of a missed note. The beauty of the game is in the simplicity of its design. The guitar has five fret buttons, a strum bar, and a whammy bar…nothing more. Compare this to the standard first person shooter (which uses every button on a regular controller and occasionally combinations as well) and it becomes pretty clear why Guitar Hero is enjoyed even by people who don't consider themselves "hardcore" gamers (in much the same way that the Nintendo Wii's control scheme has opened up gaming to more casual players). The beauty of this set-up is that while it's accessible to almost anyone (the easy setting provides a great intro to the game's mechanics without overwhelming players) it also offers up a ton of flexibility in terms of challenging more skilled players. Playing single notes at a slow speed on easy mode is one end of the spectrum—nailing hammer ons and pull offs at high speed on expert (using the same controller and techniques) is the other. Getting from the easy mode to expert is the biggest part of the fun and the journey of the game.

Guitar Hero III offers up a variety of modes and ways to play. There's the single player career mode, single player quick play mode (wherein you can simply pick a song and play it for the heck of it and not worry about your score), co-op modes (where you can play with a friend in person or through Xbox Live), guitar battle (where you play against each other), and so on. Needless to say, this is a great game to pull out at a party—everyone can play (even head to head or in co-op thanks to the adjustable difficulty levels) and with around 70 songs in all, there's a lot of variety. 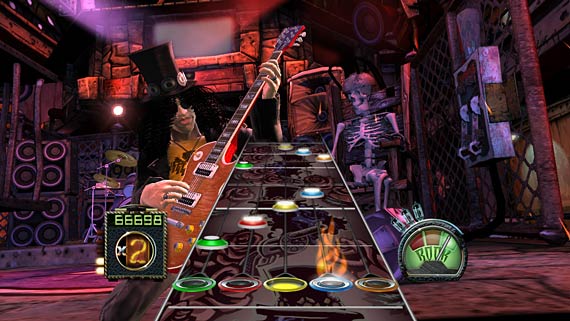 Speaking of songs, this outing's tracklist is solid (a slight improvement over the second game's set of tunes, but still not as good as the original). Highlights include a cover of Stevie Ray Vaughn's "Pride and Joy," the first series appearance of Metallica ("One"), and rock standards like "Mississippi Queen," "Rock and Roll All Night," and even more recent fare like Tenacious D's "The Metal". Players with a genuine masochistic streak will have a great time trying to five star Dragon Force's "Through the Fire and the Flames" on expert—and you thought "Freebird" was hard. The game still has some cover tunes as opposed to all original recordings, but for the most part, the covers are better this time out than they were in the last game. While it's certainly nice to have Metallica finally on board, there's still no sign of any AC/DC and Led Zepplin tracks. One can only hope that this will be remedied in Guitar Hero IV.

As a franchise, Guitar Hero has never been about graphics—but that didn't stop Neversoft from giving the usual interface a slightly new look. The game board is unchanged, but the star power gauge and combo counters have been tweaked. The changes are primarily cosmetic and don't really affect the game in any way, but they're worth noting because they're not the same ones we've been looking at since the first game. Character models in the band are well done, as are the venues. Speaking of the characters, this is the first game in the series where the lead singer of your band actually has a mouth that moves in synch with the song lyrics. It's a small thing, but it's still really cool.

Since the game isn't particularly graphic-intensive, that makes it all the more disappointing that some slowdown pops up from time to time. Even in offline mode, activating star power can cause the game to almost "stutter" graphically for a split second. This isn't a major issue in easy or medium settings, but in hard or expert it can certainly cause you to lose a combo streak. It's the game's one major flaw—and even more troubling since it wasn't present in the earlier iterations of the series.

Despite this one flaw, there's no denying that Guitar Hero III is everything we've come to expect from a game in the franchise (and it has definitely become a franchise at this point—expect to see not only lots of downloadable content but new expansions in the not too distant future as Activision keeps riding the gravy train). While there doesn't seem to be any real way to "tweak" the gameplay for future iterations, this is the one series where it may not matter. "Playing" the guitar is fun enough without having to add a bunch of new bells and whistles to the experience—and there are decades worth of classic guitar tracks out there. Expect Guitar Hero to be around for awhile—and I'm cool with that, as long as they keep making fun and challenging games like Guitar Hero III. Rating: 8.5 out of 10