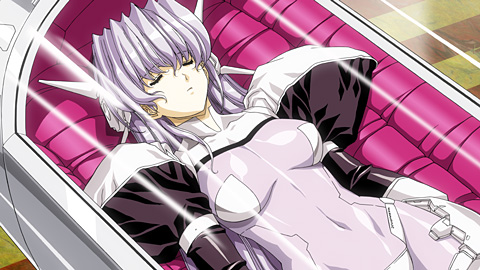 HIGH Executing a flawless plan of attack in an important story battle.

LOW Sitting through the first ten hours or so as the game sets up its predictable story.

WTF Do I really want to find and try on different outfits for my bad anime-inspired helper?

Sony's PlayStation Portable (PSP) might be dead as far as most gamers are concerned, but don't tell the folks at Atlus. The company follows up the recent release of strategy role-playing game (SRPG) Gungnir with yet another tactical adventure in the form of Growlanser: Wayfarer of Time

This newest Growlanser title is only new for American audiences—the game was originally released as the fourth installment of the series back on the Japanese PlayStation 2 way back in 2003. Those who haven't played the previous Growlanser titles (several of which turned up on our shores during the PS2's lifespan) shouldn't be put off from this experience. Wayfarer of Time works quite nicely as a standalone adventure. The game certainly shows its age in spots, but the overall package should appeal to fans of Japanese role-playing games (JRPG).

The title's story sticks to the genre template early on. Players take control of Crevanille, a young mercenary who was found as a child outside of a ruin. This will make him mankind's biggest savior when angels appear one day and start destroying everything on the planet. Crevanille will use his special powers to combat the angelic threat and team up with his ragtag band of compatriots to (hopefully) save the day. Ho-hum.

Wayfarer of Time's story is arguably its weakest link. Anyone who's experienced a JRPG in the past decade will instantly be familiar with what's going on. The characters aren't particularly well-drawn—they're mostly archetypes—and the opening ten or so hours are a slog as the game bogs down repeatedly with extended story interludes. Unfortunately, the story isn't interesting or original enough to spend this amount of time on setting it all up.

Those who stick with it will eventually be rewarded as Growlanser does open up and actually lets players play the game instead of sitting through dreadful dialogue and pointless cutscenes. This is where the title begins to work its way toward redemption.

Unlike the standard SRPG which is a grid-based chess-like affair, Wayfarer of Time is much more freeform. Think of it like a jazz solo in comparison to a carefully conducted classical concert. The traditional SRPGs spend lots of time with precise movements and turn-based combat—something that's technically proficient, if a bit staid and predictable. Growlanser, meanwhile, attempts to open up the gameplay and speed players along through what are usually lengthy campaign scenarios in a much more engaging way. The result is a solid tactical RPG that feels designed to cater to people who don't really like tactical RPGs. 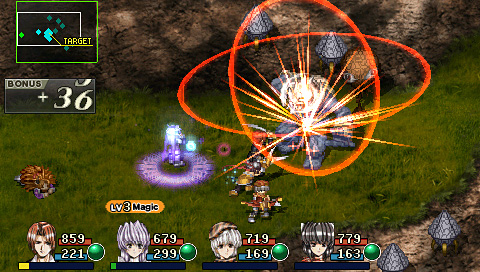 There are no grids on the game's battlefields and no traditional turn-based combat. Instead, players are free to move about the map at will with everything based on a timer gauge. Players will issue commands and the characters will perform them whenever the time gauge allows them to act. They will then continue these actions until they're instructed to do something else (which is a mere button click away and can be activated at any time during a combat engagement). While this freeform approach is a welcome change of pace, it does have one minor drawback: the game occasionally feels like it's playing itself. Part of the allure of SRPGs is being the general and micromanaging the troops. That's possible in Wayfarer, but the game does have a tendency to run quite well on autopilot.

The combat gets a little more robust as the game advances—it features rings that can be customized to add different sorts of attacks and defense instead of weapons and armor—and story interlude battles often require far more resource management than the standard field fights (primarily because they feature more involved objectives than just "kill everyone"). That being said, compulsive tinkerers might be disappointed by the "hands-off" elements of the gameplay in much of the early going.

The bigger story fights are really where Growlanser shines—although objectives aren't always quite as clear as they could be. This will lead to mission failures and restarts so that the player learns how best to attack a particular scenario. Unfortunately, there's not a lot of deviation in how the AI handles those fights—so the second go-round is likely to be just like the first, eliminating some of the "thinking on the fly" elements that make these sorts of experiences so engaging. The upside is that players shouldn't ever get stuck on a mission for any extended length of time.

Those complaints aside, Wayfarer of Time does manage to create an interesting variation on the traditional SRPG combat formula. It's not perfect, but once it gets rolling it did keep me involved.

When not in the field, Growlanser keeps players busy advancing the plot through conversations (and after the weak opening, the story does eventually come to feature some twists and turns) and working on interpersonal relationships that affect the game's ending. There are multiple endings (over 40 in all) to be experienced in Wayfarer of Time, so the decisions matter. It will reportedly take four playthroughs to see all of the endings.

Issues aside, it's hard to discount the feeling of nostalgia that permeates Growlanser: Wayfarer of Time

. Gamers like me, who experienced the golden age of the JRPG firsthand, will undoubtedly enjoy this title despite the occasional misstep. It's easy to say that they don't make JRPGs like this anymore—but at least companies like Atlus are willing to port them to modern hardware for an appreciative niche audience. Gamers looking for a trip down memory lane, an interesting reminder of the good ol' days of the form, or one last hurrah for their PSP will want to give Wayfarer of Time a shot. Rating: 7.0 out of 10.


Disclosures: This game was obtained via the publisher and reviewed on the PSP. Approximately 55 hours of play was devoted to single-player modes (completed 1 time). There are no multiplayer modes.

Parents: According to the ESRB, this game contains blood, fantasy violence, mild language, and suggestive themes. Parents will want to take note of Wafarer of Time's Teen rating, but there's nothing overly objectionable in the game as a whole. Sure, the busty anime chick stereotype lives on in the game's world, but it's not particularly risque. If your kid likes JRPGs and plays them regularly, there's nothing to be too concerned about here.

Deaf & Hard of Hearing: The game's standard scenes are presented in text—but unfortunately the anime cutscenes (which are big moments in the narrative) are voice-acted. I could not find an option to turn on subtitles for them, meaning hearing-impaired gamers will be missing out on a big part of the experience.

“You’re not able to perceive what I’m saying because you’re thinking with emotions not logic.” Considering all of the ridiculous ad hominem based attacks you made in your response, I’d say you’re the one being emotional. “You’ve never sat down to deconstruct these gameplay systems.” I sat down in front of FFXII for 109 hours engaged in its gameplay systems fully. I know of what I speak. “FF12 was copying MMO’s and MMO’s are known for boring combat because of issues regarding internet latency.” FFXII’s battle system was not inspired by MMOs, it was inspired by the NFL. Go do… Read more »

… even without scripted combat. The combat system in FF12 is pretty bad. You’re not able to perceive what I’m saying because you’re thinking with emotions not logic. You’ve never sat down to deconstruct these gameplay systems. FF12 was copying MMO’s and MMO’s are known for boring combat because of issues regarding internet latency. Anyone who complains about “grind” and “padding” is a new generation gamer that wants story and cinematics over actual gameplay. 99% of what you DO in an RPG is combat, the rest is just going from story NPC to story NPC (which requires no gameplay elements).… Read more »

Thanks Mike for your clarification. I also grew up on 8 and 16 bit JRPGs. The first one I ever played was Phantasy Star actually. I think to boil it all down 16 bit JRPGs focused on the gameplay more and the presentation less, that made them tighter and more focused. Conversely grind was added as padding in place of FMVs and mini-games, so let’s not let nostalgia overtake us. However, I disagree with anonymous that FFXII plays itself. It -can- play itself, what with the gambits and all of that. However later in the game when enemies become more… Read more »

… because the game actually focused on combat and gameplay systems. Modern RPG’s have pretty much gutted any kind of complexity. FF12 plays itself. I’d love for someone to remake Final fantasy 1 but ADD all sorts of new things instead of just being mostly a graphical update. I will never forget running across a cave and in fear of WIZARDS being XXX’d by the cave boss and RUB’d! Modern games just don’t have the same fear factor. I wish Xenosaga didn’t have such a bad combat system. Most modern JRPG’s have not really done anything to come up with… Read more »

Glad the review was useful for you.

For me, the golden era of JRPGs was the 16-bit years. I really enjoyed the PSX era as well, but my fondest memories and my all-time favorite JRPGs were generally on the SNES and the Genesis. I’ve played a bazillion JRPGs over the years, but that era really stands as the pinnacle of the form for me. That’s not to say there haven’t been great titles in other years — but for me, everything has to sort of measure up against those 16-bit games.

Thanks for the review, it was informative and told me a few things other reviews failed to mention. I definitely want to own this game now. If it wasn’t for Atlus and Xseed we would be in the doldrums as far as having fresh JRPGs to play.

“Gamers like me, who experienced the golden age of the JRPG firsthand”

Out of curiosity, what specific era do you consider to be the “golden age” of JRPGs?