Wasn't Worth The Wait 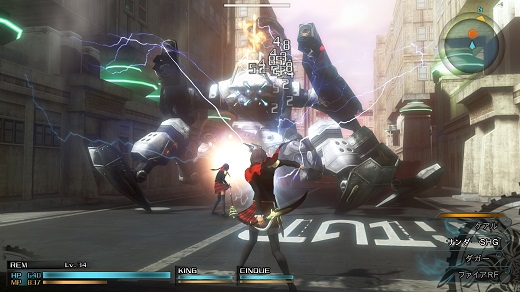 HIGH It comes with a demo for Final Fantasy XV…

LOW Listening to another FF filled with nonsensical gibberish like "l'Cie"

WTF Why are we still in the Final Fantasy XIII universe? Enough already.

Once hailed for its ability to tell engaging, epic stories, the Final Fantasy franchise has stumbled over the past decade or so when it comes to compelling narratives. Square Enix looks to right the ship with Final Fantasy Type-0 HD, but can a port of a PlayStation Portable (PSP) game restore the luster of this venerable series?

The answer, as always, is a little subjective. Type-O is a frustrating assortment of interesting and terrible ideas cobbled together into an experience that often had me wondering if the franchise has simply gotten too big for its own good.

After FFVII, Square Enix decided that every Final Fantasy game had to be epic in scope, and the need to continually attempt to outdo the previous installments has led to some frustratingly awful decisions in subsequent games. This has been particularly true of the extended Final Fantasy XIII series, of which Type-0 is yet another installment.

That's right, get ready to bust out a ‘nonsense dictionary' because Type-0 contains a barrage of made-up words and howl-inducing statements like "So even a l'Cie like Qu'nmi cannot keep the Crystal Bird in check." What in the hell does that even mean? And this is all in the first hour of the game. The cut-scenes? They're like a giant gibberish madlib…

We all should have expected trouble was brewing on the narrative front when Square Enix started billing Type-0 as "the darkest Final Fantasy game." FF has tackled some mature ideas over the years (often in the most ham-handed and on-the-nose way possible) but it's never been a particularly dark franchise. While Type 0 it starts out with a heavy death scene, having a ragtag group of teens at a school of magic fighting some ominous war feels far more like traditional video game wankery than War and Peace. Honestly, Type-0 could be summed up by saying it's simply Harry Potter, Persona, and Killzone mixed together and re-skinned in the trappings of Final Fantasy. Unfortunately, it doesn't live up to any of its inspirations (well, except maybe Killzone—but let's be honest, that's a really low bar).

So if the story is nonsense, what does Type-0 actually get right? The combat. Mostly.

Type-0 boasts a real-time action-based combat system where players make up parties of ranged, melee, and caster combatants. The game whisks players away to a field for combat, where they can move about at will. Players actively control one character while the A.I. controls the other two.

If first appearances suggest that since it's an action-oriented system and therefore okay to spam attacks, don't be fooled. Players will have to manage the flow of their attacks to take advantage of the game's various systems, including marks that appear over enemies' heads that allow significant damage to be dealt if struck in the correct time. It sounds simple, but trying to nail these attacks while dashing around the combat area is enjoyably frenetic. This is the one area where Type-0 really shines, and it makes up for a lot of the game's other shortcomings.

Apart from this combat, there isn't much to praise. For example, it doesn't seem particularly fair to bag on a game that's just a high-definition port of a PSP title, but I have to say it anyway—this is an ugly game. SE tried to pretty it up, but jumping from the PSP to 1080P HD TVs is a huge move, and Type-0 suffers in the transition.

Finally, the most annoying element of Type-0 has got to be the camera. Just getting it to stay in position without making myself sick in the process is the toughest challenge the game has to offer. The perspective spins around like a drunken top, and made play completely unpleasant for the first few hours. As time passed I learned to live with it, but it can be frustrating in boss fights because the roaming viewpoint has a mind of its own. Game cameras have gotten pretty good over the past few years, but Type-0 provides a solid reminder of what we used to put up with.

Hardcore Final Fantasy fans and completionists will want to take Type-0 HD for a spin. The combat is engaging even if the story isn't, and there's a decent amount of playtime for the investment. However, those hoping to see the franchise return to its legendary roots, or those (like me) who are just sick of the Final Fantasy XIII universe are likely to come away less impressed. It's nice that we've finally gotten the opportunity to play this game, but I'm not convinced it was worth the wait. Rating: 5.5 out of 10


Disclosures: This game was obtained via publisher and reviewed on the PS4. Approximately 25 hours of play was devoted to single-player modes (not completed).

Parents: The ESRB seems to have erred on the side of caution when it comes to Final Fantasy Type-0 HD's Mature rating. The story features war and death, but there's nothing particularly offensive or troubling here—it's probably not something the under 13 crowd will want to play, but putting it on a shelf for only the 17-year-olds to play feels excessive.

Deaf & Hard of Hearing: Hearing-impaired friends, rejoice! You too can know the joy of a story filled with nonsensical words thanks to the full subtitling of this game. You can even enjoy it in French or Spanish—but "l'Cie" sounds stupid no matter what language you say it in.

It’s a terrible game. I put 24 hours into the PSP version and I gave up on it. Type-0 is wholly centered around hours of grinding due to level tiered mission requirements. You have 14 playable characters and all of them require copious amounts of grinding to keep up their usefulness. There’s so much bad game design insofar as player inconveniences in this game that it boggles the mind. Type-0 does not respect the player’s free time and attempts to stretch about 10 hours worth of game content to 40+ hours by artificial contrivances and grinding, grinding, grinding. The plot… Read more »

I may have to Youtube the ending. I don’t know that I’ll ever actually finish the game the old fashioned way…

I think it was mostly just because they spent a lot of money on that engine and felt like they had to get their money’s worth out of it — but don’t hold me to that.

I’ve been ready to move on since FFXIII. It’s the worst, most boring FF world, and we’ve been stuck there for forever…

I honestly don’t understand why Squeenix keeps pushing the “Crystallis” series (or whatever they want to call it.) The games don’t have engaging characters, competent plots, or enjoyable combat. So why are we always returning to this world?

It certainly has sort of lost its way in recent years. I like Final Fantasy XII quite a bit, but from XIII to present, things have been a bit of a disaster.

Maybe XV will right the ship — but I’m not holding my breath.

It seems like this series has just completely jumped the shark. I haven’t played a lot of FF games but none of the recent ones have done anything to make me want to change that.

I thought the ending worked really well. Probably because the rest of it was average at best. But, I was happily shocked.