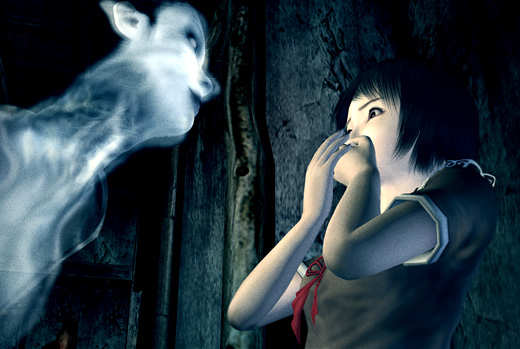 As someone who's spent the majority of his life as a fan and student of horror cinema, I like to think I have a pretty good idea of not only what's scary (at least as much as one can have an idea on this—fear is still subjective after all) but also what makes scary films (and books, and games) work.

What might be the most criminally under-appreciated element of the horror experience is the use of sound. Since cinema (and gaming) is essentially a visual medium, it's only natural that audiences tend to focus on visuals. I can think of literally hundreds of creepy shots in horror films (the sheet covered ghoul with the nasty looking hedge clippers in The Exorcist III, Billy's wide open eyeball peering through the crack of the door in Black Christmas, etc.), but most people would be hard pressed to come up with a creepy sound from their favorite horror movie.

In fact, the importance of music and sound in horror cinema was only really driven home for me after watching the Criterion laserdisc version of John Carpenter's seminal slasher film Halloween. In the extras on that disc, there's a segment near the climax where Laurie explores the upstairs of the house where Michael Myers has left all of his handiwork. When Carpenter and company showed the rough cut of this scene (and the entire film) to studio execs without the musical score and stinger sound effects, no one thought it was scary. Indeed, the scene on the disc, without music, isn't even remotely frightening. However, when the same scene is cued up with Carpenter's minimalist score playing over it, the effect is dramatic—the scene's tension ratchets up almost exponentially.

This use of music and sound is perhaps the greatest strength of Fatal Frame 2: Crimson Butterfly, the sequel to Tecmo's underrated survival horror offering Fatal Frame. While Crimson Butterfly never wants for a gruesome or terrifying visual, it's the audio component of the game that makes it so creepy. As it stands, the game is a veritable primer on how to use sound to create atmosphere in a horror game. Forget the endless jump scare moments of Resident Evil—Crimson Butterfly isn't interested in giving players a quick jolt—it wants to unnerve them.

This only makes it all the more disappointing that a game with such lofty artistic ambitions—actually scaring players instead of just making them jump and cringe at gore—falls back on the clichs so prevalent in the survival horror game sub-genre. Take everything you ever hated about the Resident Evil games, subtract the clunky control scheme, and Crimson Butterfly is the end result.

The game's most glaring shortcoming from a technical standpoint is the camera system. Like just about every other game in this genre, the camera is set in a fixed position. It moves whenever the player moves about the room, jumping to a new static angle as different parts of the room are accessed. The idea here seems to be to create a cinematic gaming experience—in reality though, all it does is confuse the hell out of anyone playing the game. Move in one direction, the camera angle switches, and continuing to move in that same direction now takes the onscreen character right back where they came from. I have to believe developers can do better—this camera system is outdated, and it wasn't even good to begin with. 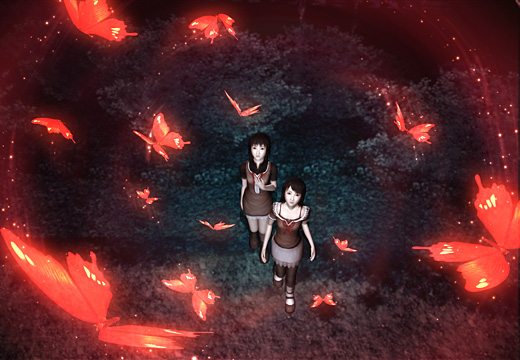 Crimson Butterfly's other problem is that the game features an abundance of backtracking. Much like Resident Evil, players will explore one area, find a locked door or puzzle, and then have to traipse back across the entire village for the key or solution. This isn't gameplay—it's busywork. And like the camera system, it's long since worn out its welcome.

It's almost tragic that these two design elements mar the overall experience, because aside from them, the game is really good. The aforementioned soundwork is fantastic (particularly when experienced through a good surround sound system) with lots of moans, screams, and other ambient noise complementing a minimalist soundtrack that induces gooseflesh with a surprising amount of regularity.

The game's plot is no less impressive, melding modern-day Japanese horror cinema aesthetics with traditional folklore and ghost stories to create a genuinely multimedia scarefest. While playing the game, astute horror fans will spot tons of references—everything from Hideo Nakato's Ringu, The Blair Witch Project, Brigadoon, and Lucio Fulci's The Beyond—and that's just the tip of the iceberg.

In fact, the game is so cinematic in its inspirations and executions it's hard to not imagine this particular game being adapted as a film. It's a movie I'd certainly pay to see

The game finds modern day twin sisters Mio and Mayu trapped inside All God's Village. Said village disappeared long ago and is the stuff of local legend—people wandering the surrounding forest will occasionally find themselves inside the haunted village. The land is perpetually bathed in darkness and haunted by restless spirits because it's built on one of the gates of Hell. To keep the peace, the village sacrifices twins to the gate—but sisters Yae and Sae messed up the ritual when one of them fled their fate. Because of this, the village is cursed.

Mio and Mayu must navigate the haunted landscape armed only with a special camera, the Camera Obscura, that can capture the images of the vengeful ghosts and hurt them—all while trying to find a way to escape back to the real world.

The story is rich and well drawn, recounted through a number of different media formats. Film reels, various journals, and spirit stones that can be listened to through a psychic radio are all used, and used effectively, to divulge the backstory of the game. The empty village, bathed in darkness, is one of the more impressive game settings in recent memory. The feeling of isolation in this game is almost palpable. Those who are spooked easily will want to play in the daytime, with all the lights on and doors locked.

However, more adventurous souls will find that the game is best experienced in a darkened room in a quiet house. With the excellent sound work filtering out of a nice surround sound system and enveloping the player in the game world, Fatal Frame 2: Crimson Butterfly becomes one of the most terrifying videogame experiences of all time. Rating: 7.0 out of 10

Parents may or may not what their children playing Fatal Frame. In some ways it really isnt as bloody or violent as other horror games, and there are no references to sex or alcohol whatsoever. However, many of the cutscenes and images of ghosts encountered throughout the game depict torture, disfigurement, and other nightmare-inducing concepts that may disturb children.

Fans of survival-horror games like Resident Evil and Silent Hill may have mixed reactions to Fatal Frame. To some it may seem a gimmicky imitation of better games, while others may find it to be a fresh approach to the genre.

Fans of Tecmo's earlier games may understand where its coming from more easily since its gameplay partially echoes the eccentricities of their Deception series.

Those who are intrigued by the plot involving traditional Japanese religion and mythology should be warned that the localization hampers its appeal, although it is still possible to enjoy to some degree.

Players who simply want to be scared will like this game a lot, but only if they find the photography aspect as subtly effective as I did.