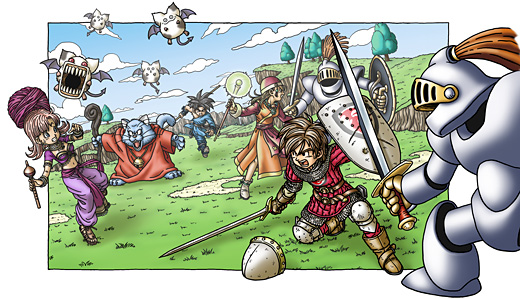 HIGH Finding a rare piece of equipment in one of the game's numerous optional dungeons.

LOW Grinding for hours on end so you can afford to buy new gear.

WTF Why is it so damn hard to unlock most of the advanced jobs? We're not masochists, Level-5…

When it was announced that the ninth installment in Square-Enix's venerable role-playing game series Dragon Quest would be a Nintendo DS exclusive, some of us were a little bummed out. Sure, Nintendo's popular handheld has made a fine home for re-releases of several of the earlier Dragon Quest entries—but after the glory of Dragon Quest VIII on the PlayStation 2, this seemed like a step backwards. The graphics wouldn't be as impressive, for starters, and it was hard to imagine the same level of detail in terms of narrative and gameplay emerging from one the DS's tiny game cartridges.

The naysayers were wrong, though. Dragon Quest IX: Sentinels of the Starry Skies

is a full-fledged Dragon Quest game. It might not be as visually striking as the previous title (also developed by Level-5), but it could be argued that it's actually a deeper experience when it comes to gameplay. Sometimes great things do come in small packages.

For me, Dragon Quest has always been the hardest series to review—if only because this is a franchise that never really changes. The grandfather of the Japanese turn-based RPG genre clings to its conventions like a drowning man to a life preserver. Aside from slight gameplay tweaks and hardware improvements, Dragon Quest hasn't really changed in any meaningful way in years. DQIX is no exception—making this the one gaming franchise that actually isn't penalized for maintaining the status quo. Instead, there's something oddly comforting about Dragon Quest as a whole and DQIX in particular. As soon as you boot it up, you know exactly what's in store for you—spells like Fizzle, metal slimes that dole out loads of experience if you can hit them before they run away, Akira Toriyama artwork, and a long slow grind for experience.

If that sounds like just what the doctor ordered, then DQIX is going to be a fantastic experience for you. If you're one of the new age of RPG fans—the younger players who need real-time combat, a thousand stupid gameplay systems with dumb acronyms for names, and cutting edge graphics, you should probably just move along now. This isn't really the game for you. 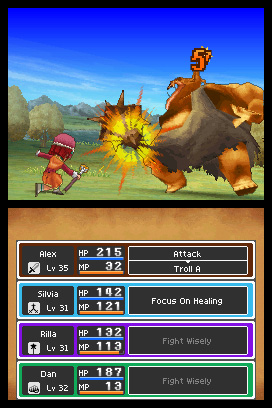 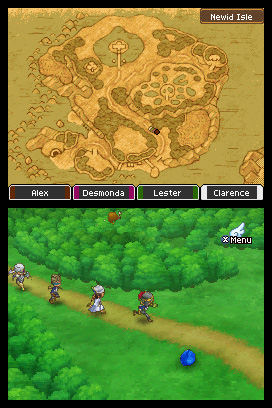 As usual, the story in this installment is almost an afterthought. Players customize a character who serves as a Celestrian (which is RPG-talk for an angel…). After cataclysmic events cause the main character to lose his/her wings, he's forced to wander the land below to find out what's going on. Yeah, that's really pretty much it. Oh, there's more nuance to it than that, but stories in Dragon Quest have always seemed like an afterthought—serving as little more than the glue that holds the more important things together.

The biggest "more important thing" is the gameplay. It's still turn-based, but players will reach a point relatively early in the story where they can change their character's class. Changing and leveling up different classes makes for characters who wind up with a variety of different skillsets (particularly when one factors in the skill points earned at various level ups) and brings a genuine feeling of customization to the experience.

The game's main quest is a roughly 50 hour romp, but that's merely the beginning. DQIX has a robust post-game component that seems almost never-ending. In some ways, the main storyline isn't even the best part of the game—it's what comes after, when players can continue leveling their characters to 99 while exploring "grottos" that are opened through the acquisition of treasure maps. On the higher level maps, the bosses make the main storyline's final foe seem like a real pansy. The reward for trudging on through these hellish labyrinths is uber rare gear and other goodies unlikely to be encountered during the main story. Maps can be traded with other players, too—meaning the playability factor just keeps going up when it comes to this title.

One of the real benefits to appearing on the DS (aside from the ability to quick save anywhere…) is that DQIX can really take advantage of the system's online capabilities. Granted, doing anything online with the DS often feels almost counter-intuitive—but this is one of those rare exceptions where it works well. If you can get three other friends together, it's entirely possible to play the game where you only have to control one of the characters instead of all four. That's very cool—and I wish I'd had some folks around to play with so I could've experienced it firsthand. 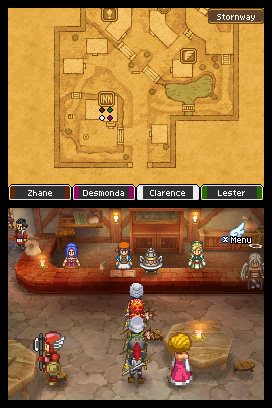 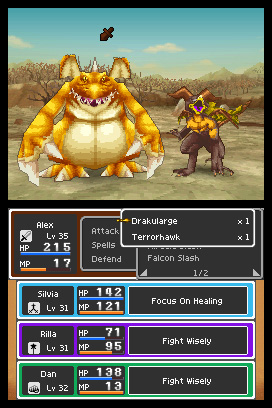 One of the biggest downsides to the game being on the DS is that it's not the most graphically advanced title out there. DQIX is a fairly significant step down from DQVIII in the visuals department. There's a certain charm to most of the character models throughout the game—at least until you spot their super-deformed flipper hands and start to wonder if everyone in the game world had a mother who took a lot of Thalidomide while pregnant.

The game's other flaws are hard to complain about since they're an ingrained part of the Dragon Quest experience and most people know to expect them going in. Grinding is still a huge component of the game—not so much for experience (although it's a long, hard slog to 99—I played 50 hours and wasn't even level 50…) but for money. Grinding to afford new gear is a requirement—and I don't mean going out and killing monsters for ten or fifteen minutes to re-equip your party. I'm talking long grinding sessions of mindless turn-based killing. The alternative is to take advantage of a few alchemy recipes that turn a profit from things the player can buy at shops, but even taking advantage of that method had me stopping story progress for the better part of three hours. The grind is easily the game's biggest frustration.

The other frustration revolved around the requirements to unlock some of the better upper-tier classes. The patience required to unlock some of the new jobs is of the Biblical kind. One insists that you kill three blue slimes with a dragon slash at full tension. That means several turns just charging up tension. No big deal—except the slimes are low level and will often flee the fight well before the player's gauge is full. So, the player is forced to run around in a low level area wasting time increasing a gauge and not ever getting the attack off anyway. That's not fun. Another one was even more outrageous and involved killing a metal slime while behind some sort of magic shield. Killing metal slimes is difficult (they flee almost instantly) and making it so one character in particular (the one with the shield up) has to land the killing blow is ridiculous. Luckily, unlocking these classes aren't essential to beating the main game— however, the harder grotto maps will call for a party comprised of things like gladiators or paladins or other difficult to unlock jobs.

Still, even with those complaints it's hard not to appreciate Dragon Quest IX: Sentinels of the Starry Skies

. This is a really big game for something found on a handheld, an epic yarn that offers up hundreds of hours of gameplay for those willing to invest the time. It doesn't even attempt to reinvent the franchise—or even tweak it—but the game is so good that it doesn't really matter. If you love your RPGs turn-based and with lots of battles, Dragon Quest IX will keep you occupied for quite some time. Rating: 8.5 out of 10.

Parents: According to the ESRB, this game contains an alcohol reference, animated blood, comic mischief, fantasy violence, mild language, and mild suggestive themes. Once again, the ESRB is way more conservative than I am. While the content descriptors are accurate, there's really nothing objectionable in DQIX. This is an old-fashioned RPG with minimal violence and little to concern parents.

Deaf & Hard of Hearing: Since Dragon Quest IX features no voice acting, hearing impaired gamers can proceed without worry. Missing out on some of the game's music is disappointing, but the full experience can be enjoyed thanks to text dialogue and the lack of sound-driven puzzles.

Remember Ultima Exodus for the NES? The grinding was somehow fun. Now, not so much. I guess that Chutes and Ladders used to be lots of fun for us as well when we were children.

Dragon Quest MUST evolve as a series. Right now, I would prefer to play Dragon Quest 1 or 2 than the current iterations. Amazingly enough, those games had LESS grind and more genuine challenge. Levelling up to the point where you are practically a God is not a challenge. It is just tedium.

Meh DQ stil has issues I loved and hated 8 and still need to finish the game I think I will get out the code breaker and have some fun with it in a few months, but anyway it and the DQ have issues. Insane grind, slow combat, over simplified equipment, still its a bit better than the FFs past 9, still I would like to see a few changes. A run or sped up time for normal movement(FF12 international had this, curse them for not translating the test!!!!1111) Difficulty options(easy,normal,hard,insane) that change EXP and skill points rates, so on… Read more »

I liked this game quite a bit.
But I set it down after 20 or 30 hours,
and have never gotten back to it.

Normally I dont mind grinding.
But it got to be a bit too much.