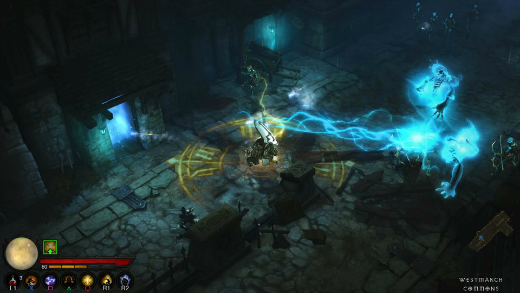 LOW Watching some guy with a hacked weapon come into my game and slaughter everything like he's doing me a favor.

WTF The random chatter heard from people is stranger than anything else in Diablo III.

If players thought the world was safe just because they killed the wicked hellspawn Diablo and reached level 60, they need to think again. There are now more monsters to slay, more loot to collect, and new level caps to reach in Diablo III: Ultimate Evil Edition.

The new package gives console gamers the original Diablo III experience along with the Reaper of Souls expansion pack which added one new character class (the Crusader), and upped the level cap to 70. On top of this, the hack-and-slash action is enhanced by several new play modes, including an adventure setting wherein players are tasked with performing bounties to obtain Rift keys that open random dungeons with ever-more-difficult bosses. Get ready to button mash, because there’s a whole lot of crap to kill here.

Diablo III: Ultimate Evil Edition is probably the greatest console dungeon crawler since the original Phantasy Star Online—it's a nearly pitch-perfect take on the "kill things and get phat loot" subgenre, an addictive experience that will keep gamers coming back in hopes of finding the next piece of legendary gear hundreds of hours after they've reached max level. It's as powerful as crack, just without the life -ruining side effects.

The game is simple—players pick from one of several classes (Monk, Barbarian, Demon Hunter, Witch Doctor, the new Crusader, or Sorceror), select a gender, pick a name, and enter the game. From there, the goal is simple—kill things, level up, and find better gear.

It's hard to believe that such an enduring franchise has evolved from this basic concept, but Diablo is proof that sometimes the simple things work better than complicated ones. There's just something inherently satisfying about reaching a new level and unlocking new skills, or seeing the seductive orange glow of a legendary drop sitting in a loot pile on the screen… 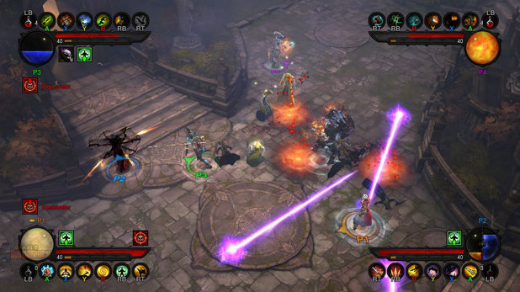 The greatest change with the console version of the game is that it forgoes the traditional mouse and keyboard interface of the PC in favor of a controller set-up. While console control schemes have made great strides in recent years, most of them don't compare to the mouse and keyboard when it comes to pure functionality, but Blizzard has gone above and beyond with the user interface here. The game plays fantastically on a control pad, with special abilities and regular attacks mapped to the face and shoulder buttons in an intuitive and easy-to-use way. For anyone who ever got sick of clicking their mouse button, this is the perfect remedy, and moving through the game's massive environments is so much nicer with a controller.

The game has a default control scheme that allows for one skill from each of the game's various trees, but there's an elective mode option that allows for complete customization as well. This is the mode players will want as they reach the harder difficulties and unlock more abilities. With this setting enabled, the PC's control scheme really has no distinct advantage over the console—and the greatest potential hurdle to a console Diablo III is eliminated.

It's entirely possible to play Diablo III as a solo experience, but the real beauty of the game shines through in the online cooperative mode. Joining a game is as easy as setting a few parameters and letting Blizzard do the rest. Players don’t even have to worry about being underleveled—the game will give a significant stat boost to those lower than the highest level player in the group.

Playing online has multiple benefits—the biggest being increased experience and magic item find bonuses. Each player that joins a game adds an additional ten percent to these stats, so anyone looking for rare loot or to level up quickly will find online mode the way to go. As an added bonus, each player in the online game gets their own loot pool—everything that drops is yours, and there's no need to worry about melee guys vacuuming up every rare drop before ranged characters can get close.

For those who don't want to deal with random dope smokers using hacked weapons on the Internet, there's always local co-op mode to play with three other friends from the comfort of a couch. This setting is nice in that a mic to coordinate or talk trash isn't needed. In fact, it's quite reminiscent of what cooperative gaming was like in the 1990s…

There is one major flaw with the console ports that I've alluded to earlier—a proliferation of item hacking and duping that has spread rapidly through the game community. PC Diablo III caused a lot of outrage when Blizzard revealed there'd be no offline mode to help keep players from being able to hack items and destroy the game’s economy and balance. In retrospect, this was probably the right call, as the console's offline mode has allowed players to alter in-game weapons and make them godly, and then to make virtual copies of these weapons to hand out to other players. It's possible to play legit, but in open games, it's certain to encounter players with hacked gear.

At the end of the day, Blizzard has achieved what many thought was impossible—they've brought Diablo III to the console audience and kept the core experience completely intact, while improving on the PC release in key ways. The console ports of the game aren't perfect and the hacking is particularly problematic, but the flaws are relatively minor in comparison to the sheer enjoyment it offers, and the Ultimate Evil Edition plays incredibly well on the PS4 and Xbox One. For players who love killing things, building godly characters, and grabbing loads of awesome loot in the process, Diablo III Ultimate Evil Edition is the biggest no-brainer purchase of this year. Rating: 9.0 out of 10


Disclosures: This game was obtained via the publisher and reviewed on the PlayStation 4. Approximately 5 hours of play was devoted to single-player modes (completed 1 time) and 80 hours of play in multiplayer modes.

Parents: According to the ESRB, this game contains: blood and gore, partial nudity, and violence. Diablo III: Ultimate Evil Edition is rated M and has some content descriptors that might give parents pause, but this is violence of the fantasy variety, against demons and other monsters. It's not a game for small children, but younger teens will not be scarred for life if they play it.

Deaf & Hard of Hearing: Hearing-impaired gamers can catch all of the awful dialogue, thanks to a full subtitling feature.

Very good review Mike. I’m ashamed to say I have this game since the release on my Xbox One but have barely played it.

I do want to add something that every single review doesn’t mention. Playing offline with friends has one very annoying design choice. You can’t look at more then one inventory screen at a time. So if you play with 4 players, 3 players are always waiting. This broke that part of the game for me.

It definitely will get harder. My level 70 fire monk and demon hunter still don’t have enough resistances and gear to survive long on anything higher than Torment level 4, so there’s definitely a lot of challenge the higher you go. Loot gets better too.

The new patch this week also added those greater rifts, which can be pretty hard too.

Thanks for the kind words about the review.

Thanks Mike, this was a great read! I’m about ten hours in to the PS4 version and with my limited experience agree whole-heartedly with all the points you raise. I have one recommendation for people picking this up for the first time, and that is to play the campaign on the hardest possible difficulty. My friend and I who are both relative newcomers to this genre nevertheless found that we were cruising through the game without much difficulty. We’re still having a good time idly racking up kill streaks and hoovering up loot, but hopefully the game will become harder… Read more »