In Space, No One Can Hear Me Yawn 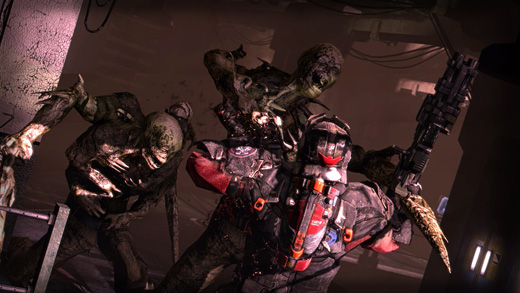 LOW Being forced to fight wave after wave of cannon fodder enemies in the game's multiple kill rooms.

If the original Dead Space was comparable to Ridley Scott's classic film Alien, then Dead Space 3

must be the series's inadvertent homage to Mary Shelley's Frankenstein. The plot doesn't involve building a hulking monster out of various body parts, but the experience feels as though it was cobbled together from bits and pieces of other games. The result is an unruly (and underwhelming) experience much-removed from the original title.

This third (and possibly final, based on estimated sales) entry in space engineer Isaac Clarke's story is proof positive of any number of unpleasant things; that triple-A survival horror games are becoming a relic of gaming's past, that tampering too much with a good thing is a bad idea, and that the single-player experience has largely become an afterthought in big budget game development. If Dead Space 3 is a glimpse of gaming's future, we should all be a bit concerned—it stands as a perfect example of how the landscape is shifting under our very feet.

As the game opens, Dead Space 3 finds engineer Isaac Clarke once again called upon to fight the evil alien Necromorph menace. Our hero is living in squalor, hiding from the world, and appears to be one step away from living on the street and telling pedestrians that Major League Baseball is trying to steal their thoughts. We're talking total "tinfoil hat" territory. Isaac gets back on his feet when military bro-dudes show up and pull a Princess Leia—"help us Isaac Clarke! You're our only hope!" The next thing we know, our engineer is once again packing heat and crushing alien skulls under his rocket-propelled boot heel.

A serious issue with Dead Space's evolution is how this series has floated away from its roots, and it's debatable if any of the Dead Space games were ever "scary" to begin with. The series has long used "cat through the window" moments to jolt the audience, as opposed to something like pure Lovecraftian terror (which is unfortunate, since the mythology feels Lovecraftian in some aspects) but what really made the original Dead Space click was the way those jump scares worked in unison with Clarke as a character. Isaac is an everyman in the original game—just some engineer forced to use his technical skill to take on an alien menace because there's no one better able to do the job.

The sequels drop that angle in favor of making Isaac feel more like a traditional space marine, and thanks to this change, we don't fear for Isaac much in these subsequent installments. This badass-ification is largely designed to appeal to a broader gamer demographic, but it kills one of the elements that made Dead Space unique in a galaxy of third person shooters. Matters aren't helped by the fact that the game is unconvincing in selling us this character's evolution over the span of three games. There's never a believable reason for Isaac to go from humble engineer to fearsome Necromorph slayer. 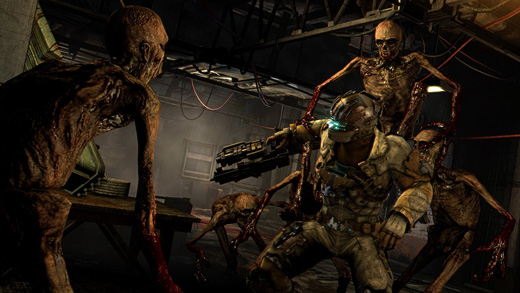 Putting disbelief aside for a moment, it must be said that Dead Space 3 is mostly successful at what it does best—shooting things. The game gives the player a multitude of weapon upgrade options and enough ordnance to blast their way through at least three intergalactic wars, and then tosses hordes of baddies at them to gleefully dismember. The only problem is the game's annoying tendency to be cheap. Dead Space 3 loves to force Isaac into a dark and narrow bottleneck, then drops in enemies in front and behind (one more way the game reminds you it wants you to play co-op). It's the most artificial kind of difficulty, and it only gets worse as the game progresses.

Compounding the issue is the inclusion of human enemies—soldiers working for the Unitologist leadership who're hellbent on stopping Isaac from completing his quest. These human enemies are yet another way the title strays from its horror roots and becomes a much more traditional shooter. The thing is, even when the game includes another whole species to blast, there's still not enough variety in the enemies to make any of them feel like anything more than cannon fodder.

I was also disappointed with how uninspired and repetitive the campaign is. The title resuses enemy models and architectural design constantly, making it feel as though the player is wandering around in a very large series of circles. This is particularly true in the latter half of the game, where we leave deep space and spend our time on a snowy planet. It's just one drab set of corridors and rooms after another, with Necromorphs regularly popping in from the air vents. Add in a copious amount of backtracking, and it becomes clear that the design is, frankly, lazy.

Of course, nothing breaks the horror component of the game more than the cooperative play. Shooting with a partner eliminates any element of terror from the story, eradicating it as thoroughly as Isaac does Necromorphs. Even playing solo, it's hard to forget that EA and Visceral really want us to play with a pal—there are two of pretty much everything, including bench terminals inputs, rappel lines, and so on. I prefer my horror games to be solo experiences, but again—it's debatable if Dead Space is even a horror game at this point.

Despite all these issues, Dead Space 3

isn't a bad game—but it's not a particularly good one, either. The focus on co-op, attempts to ditch the horror elements in favor of more mainstream sci-fi shooter aesthetics, and the disjointed, repetitive feeling of the project as a whole prevent it from ever becoming something that pops. Visceral and EA have taken one of the few interesting new IPs to emerge in the current generation of titles and made it just another shooter, and this corporate homogenization is far scarier than anything Dead Space 3 throws at the player. Rating: 5.0 out of 10.


Disclosures: This game was obtained via publisher and reviewed on the PS3. Approximately 18 hours of play were devoted to single-player modes (completed one time) and one hour of play in multiplayer modes.

Parents: According to the ESRB, this game contains blood and gore, intense violence, and strong language. Parents will almost assuredly want to keep the little ones away from Dead Space 3. While this latest entry isn't as scary as the original, it's still filled with monsters to dismember, rough language, and loads of gore. The game earns its M rating.

Deaf & Hard of Hearing: Hearing-impaired players will get the bulk of the Dead Space experience thanks to subtitled dialogue available throughout. However, the scavenging mini-game lets players know they've reached a point where they can deploy their robot with an audio cue—which is not presented as a subtitle. Gathering materials is important to creating better gear, so this is a pretty big issue.

This the million dollar question — why did the more mainstream shooter audience, who the game clearly targeted, stay away? If I had to guess, I’d say it’s because this franchise has no sense of identity anymore. Most people hear Dead Space and think “survival horror” even if it’s not really that anymore. The mainstream gamer they were aiming for probably doesn’t keep up with things enough to know that by this installment the series has basically become another Gears of War. This is what happens when you try to change something that already has a well-established identity. The other… Read more »

Great review; I knew at the end of DS2 (which I liked well enough) that I probably would not buy 3, and the bad-assification (great stuff!) and homogenisation that you mention are part of the reasons why. I like the way you tie the criticism of the game to the risk-aversity of the studio. The blandness of 2 was a contributing factor to me not buying 3, but I wonder why the audience that *was* being targeted stayed away. They made it too generic? Strange, as it reviewed fairly favourably, and you’d have a certain amount of sympathy for the… Read more »

[quote]The gun customization thing feels very forced in this game.[/quote] yes, that is what i was getting at. with regards to the gun customization thing, it feels like the developers felt they just needed to have SOMETHING new to throw into this game, so someone came up with the idea of gun customization and they went with it. like i said, it just feels like something that doesn’t belong in a game like Dead Space and as you said, it just feels forced. i also agree with your overall sentiment about how the developers made Issac a “special” guy who… Read more »

The gun customization thing feels very forced in this game. If you think back to the original, Isaac was making weapons out of tools, because A. he wasn’t some kind of ass-kicking space marine wannabe — he was just an engineer who happened to be the only guy who could do the job at hand — and B. That was organically built right out of the story. This all ties into that whole badass-ification thing I mention. I know the games have made some half-hearted attempt to explain how Isaac has some special connection to this whole thing, but honestly,… Read more »

i think this review seems mostly spot on. i downloaded and played the demo when it came out and i wasn’t impressed with it – at all. which is a real shame because i was a big fan of the original Dead Space and i thought the second one was a good game, if not exactly on par with the first. after reading this review, i think i will wait until the game gets considerably cheaper before i pick it up for myself. i mean i was going to do that anyway, but this just confirms it. [quote]A serious issue… Read more »

This review nails what DS3 is, a completely and utterly average third person shooter. Personally loved DS1 and 2, but noooo, EA wanted to get the COD crowd, so they made it more action-y, added a couple of military bros, filled it with Uncharted wannabe set pieces and explosions, and got rid of the horror elements (yeah, I thought the first 2 were scary). The final result? A boring, uninspired yawn-fest that wont sell, because the COD crowd wasn’t buying the goddamn series in the first place, and you basically told the people who loved and bought the first two… Read more »