Welcome to Still Creek, Population: You 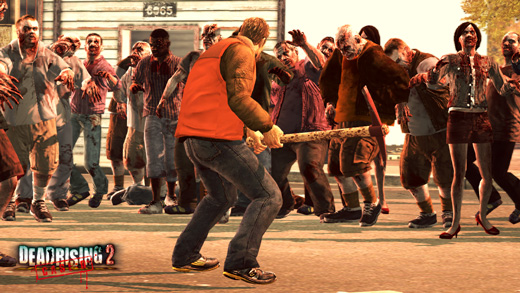 HIGH Killing zombies with the broadsword is a gory good time.

LOW Trying to guide an injured survivor back to the bowling alley only to have her defect at the alley's entrance.

WTF Watching a female zombie take a giant chomp out of Chuck's crotch.

Capcom's Dead Rising was one of my most anticipated games of all time. The idea of fighting a bazillion zombies in a shopping mall was like music to a horror geek's ears. Who could turn down the opportunity to basically play a videogame version of George Romero's landmark zombie film Dawn of the Dead? Not this guy, that's for sure.

When the game hit, it was a day one purchase for me. Sadly, try as I might (and I tried mightily on multiple occasions), I could never get through Dead Rising—it was filled with so much potential awesomeness, but wound up killed by several design and gameplay flaws. That didn't stop Dead Rising from selling a truckload of copies, though.

When news broke about the inevitable sequel, I took a guardedly optimistic approach. Maybe Capcom would listen to the complaints about the terrible A.I. you had to escort through hordes of flesh-hungry zombies and the atrocious save system. Maybe they'd make guns you could actually use effectively and build upon the promise so inherent in their idea…

While we won't find out if the company managed to right those wrongs completely until the end of September, we do get an early glimpse at what players can expect from Dead Rising 2 in Dead Rising: Case Zero—a downloadable prequel that takes place before the events of DR2. This content (which is not part of the Dead Rising 2 game) would probably best be described as a preface to the sequel's storyline.

In it, we meet main character Chuck Greene—a motocross star who's fled Vegas after a zombie outbreak puts the city on lockdown. Traveling with his young daughter (who's been bitten) Chuck winds up in Still Creek—a small desert town that's got its own zombie problem.

What's meant to be a quick stop becomes much lengthier when someone steals his truck and the Zombrex inside. Zombrex is a new medication that keeps the bitten from turning—as long as it's administered once every 12 hours. Chuck has to find more for his little girl, while dodging zombies, saving locals, and finding a way to escape the city before the military arrives to quarantine it that night. No big deal, right? 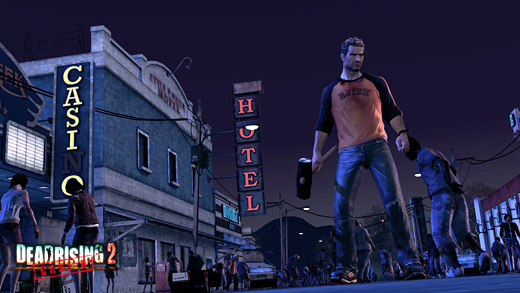 If Case Zero is any indication, Capcom took criticism leveled at the original game to heart. This new content was a wholly more satisfying experience for me, and while playing it I felt as though this was how the first game should have operated.

The camera and silly pictures are gone. Zombies are still everywhere, but their hit detection when attacking Chuck seems more generous for the player. Ally A.I. is actually capable of following you through a mass of the walking dead without screaming for help every other step. Even the save system is better—the small area of Still Creek has several different restrooms that can be used to record progress. All in all, Case Zero has me excited about Dead Rising 2 proper.

Aside from those tweaks, the core Dead Rising experience is relatively the same. Players still have "cases" to deal with—and they still have time limits. Completing a case in the time limit opens up the next portion and so on. I will admit that this is one returning element of the original game that I could have lived without. I'm not a fan of arbitrary time systems in videogames because they force a player to progress at a rate the developer chooses instead of allowing us to go at our own speed. As someone who likes to explore the nooks and crannies of these elaborately crafted game worlds, a time limit makes me feel as though I'm being rushed.

To counter this, there's a restart story option. This also makes a return from Dead Rising and probably owes back to an earlier Capcom game entitled Breath of Fire: Dragon Quarter.

Essentially, players can restart the story at any time with all their money and experience intact. This then makes running through the early stages of the game easier since Chuck is stronger and has money for better weaponry. The downside to this system is that players spend a lot of time doing the same things over and over again.

There's probably two hours of content from start to finish in Case Zero—if you know where everything is and how to do it. By having to restart several times to compete with the clock, etc. players will actually wind up spending somewhere between four and six hours with the title. For a game that only costs 400 MS points, it's a good buy. I just wish it was four to six hours of fresh content. (FYI—Several tours of duty are necessary to reach the level cap—which is set at 5. This is useful since it will carry over the sequel.)

Now that we've got the few little niggling negatives out of the way, let's talk about the good.

The new story and location are engaging. The idea of Chuck having a daughter made me nervous initially—say what you will about videogame storytelling and how far it's come, but I was almost certain the kid would be annoying and little more than something to be placed in harm's way to generate a cheap emotional response from the audience. I was wrong. Katey is largely a non-entity in the game. She stays put in the safehouse and is featured in the game's one psychopath encounter, but has no bearing on its outcome. Kudos to the writers for that.

Still Creek, meanwhile, isn't a huge environment but is nicely conceived. There are lots of little places to explore off the beaten path—and even on my third run through (because I'm an achievement whore…) I was still finding new things. It's not a giant Liberty City-esque environment, but there are definitely things to do and see in this town.

Since zombies are everywhere, one of the player's top priorities is getting Chuck armed. Like the first game, almost anything can be a weapon—including newspapers, bottles of shampoo, and park benches. Littered amongst the landscape are also real weapons—including a sniper rifle, a handgun, wrenches, 2x4s, baseball bats, chainsaws, and so on. Some of these make for better weapons than others, but the game's best weapons are made by combining items.

See that baseball bat and those nails? Combine them at a work bench and you've got a bat with nails in it. Combo weapons really bring the pain and give bonuses—effects like two times the normal experience.

They're inventive, too—players can make an awesome electrified rake, a shotgun/pitchfork combo, Molotov cocktails, IEDs, and best of all, chainsaws on a stick. Of course, it's funny that there are all these cool creatable weapons, but my favorite turned out to be the broadsword in the hunting store. Cutting through a gaggle of zombies with that thing never gets old. Oh, and the guns seem to work a little better this time around. I still prefer melee, but guns feel more viable in a general sense.

For such a short game, there's quite a bit of fun to be had in Dead Rising: Case Zero. This is a definite improvement over the first title (plus you can actually read the font on a standard definition TV this time around) and has me completely excited for Dead Rising 2. This delectable little zombie apocalypse simulator should keep you more than happy until the true sequel arrives next month. Rating: 8.0 out of 10.

Disclosures: This game was obtained via publisher and reviewed on the Xbox 360. Approximately 6 hours of play was devoted to single-player modes (completed 1 times) and 0 hours of play in multiplayer modes.

Parents: According to the ESRB, this game contains blood and gore, intense violence, language, sexual themes, use of alcohol. Case Zero is a bloody and violent game and being surrounded by zombies is pretty intense. Younger children should be kept clear of this one.

Deaf & Hard of Hearing: The dialogue comes subtitled—and with the exception of one scene (that I can't remember if it was subtitled or not) shouldn't pose a problem for anyone who can't hear. You will miss out on all the zombie moaning, though.

I really want to love the original Dead Rising, but I’ve just never been able to power through it. I love the concept so much, but the game’s flaws just become so aggravating to me that I give up every time. I think you’ll be pleased with this experience — it’s definitely true to the original game, just tweaked in little ways that made it feel way more playable and fun to me. I was nervous when the review code showed up because I was picturing it being like the first title and wondering if I really wanted to spend… Read more »

Glad to hear this DLC lives up to the expectations, and especially glad to hear it from a connoisseur of the genre such as yourself. Personally, I think the first game is one of the best examples of how a great idea can be hindered by gameplay design errors but still be awesome. Yep, Dead Rising is one of my favorite games ever, even though the AI was abysmal and time has been all but kind with the graphics – I won’t complain about the save system, as I feel it was just perfect to convey the sense of urgency… Read more »