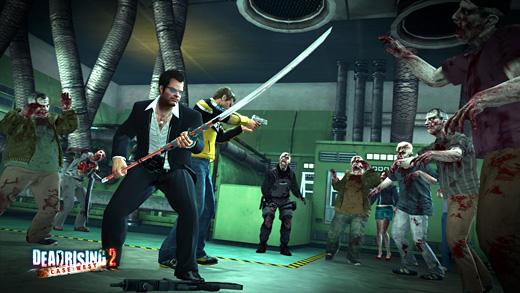 HIGH Getting to run around with Frank West killing zombies and guards.

LOW The fact that the only way I can play as Frank is by joining in someone else's multiplayer game.

WTF Why does Frank suddenly look like the love child of Dan Aykroyd and Mickey Rourke?

Gamers who didn't get enough zombie killing mayhem from this year's two earlier Dead Rising releases (prequel downloadable episode Case Zero and the full-fledged sequel Dead Rising 2) will be pleased to know that there's at least one more zombie apocalypse available to them with the release of Dead Rising 2: Case West

If the title didn't give it away, this downloadable epilogue to Dead Rising 2 features the return of the original game's protagonist, journalist Frank West. West teams up with Dead Rising 2 hero Chuck Greene to further investigate who's behind this latest zombie outbreak. The new installment picks up right where the first game ended (although, those who got the S ending will want to YouTube the A ending instead since it serves as the starting point for this adventure…) with Chuck and Frank soon finding themselves in a medical laboratory bunker.

This highlights the first problem with Case West—the setting is boring. Many have pointed out that the first two main games in the series both took place in shopping malls and that it was at least a little bit redundant. However, the new setting is generic to the extreme—it's just an interconnected series of rooms with different themes. Oh, look, it's a zombie containment area! Oh, here's a cafeteria! Wow, here are laboratories! The whole of the experience is marred by bland environments that do little to inspire any kind of reaction beyond apathy. The effect only worsens after running through them for the tenth or fifteenth time.

It seems as though developer Blue Castle figured the presence of wall to wall zombies would probably lessen the boredom factor at least somewhat—and it kind of does. The only problem is that after two earlier games featuring these same amounts of walking dead, the visceral thrill of seeing a thousand zombies onscreen at once is largely diminished. Sure, the undead are everywhere in Case West—but they were everywhere in Case Zero and Dead Rising 2 as well. The spectacle just isn't as impressive on the third go around.

That's okay, because Blue Castle is hoping that gamers won't really notice because they've brought back Frank West. West, who became something of a gaming cult icon after his turn in the first Dead Rising, is back to take more photos in the new mini-installment. It is great to have West back—even if he looks like the strange lovechild of Dan Aykroyd and Mickey Rourke this time out—which makes it all the more disappointing that players can only take control of him in an online cooperative game. That's right, anyone playing Case West as a single-player experience will be forced to control Chuck Greene while Frank runs amok as their A.I. controlled partner (fortunately, Frank is a tank and can't be killed—so players won't have to babysit him constantly). 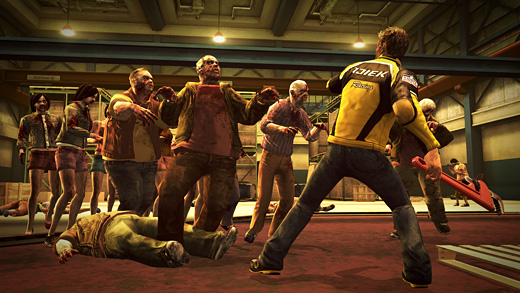 The core gameplay of Case West remains unchanged from Dead Rising 2. Chuck and Frank have cases to solve and they must reach specific destinations and perform certain tasks before time runs out. If the clock reaches zero, it's game over. This highlights the biggest problem with Dead Rising in general—a game featuring thousands of zombies onscreen at once should be about killing said zombies, not running around them in a mad race against a clock. Players can stop and kill zombies (and more often, well armed guards) but it's never the focus of the gameplay—which is still a disappointment. It's as if Capcom is afraid to let gamers just run wild slaughtering zombies…

Once again compounding that challenge to beat the clock is the presence of survivors. Since this game doesn't take place in a mall, there's no safehouse to lead the living to. In theory, this is great. While the survivor A.I. was greatly improved in Dead Rising 2, leading the rescued folks around was still more of a chore than anything. Case West flips the script by having survivors request an item—for example, one wants an electric cattle prod. Provide this item and the survivor will set off on her own, leaving the player with a PP bonus (the game's experience points equivalent) and the freedom to move on with the game. This is the one area where Case West actually improves upon the main game's experience.

Some other welcome touches include the removal of missions involving the fetching of Zombrex. To be honest, the inclusion of Chuck's daughter Katey was handled quite well in both Case Zero and Dead Rising 2, but going back to the well with a third time would have been overkill for sure. Katey is nowhere to be found in the game proper, which is almost disappointing. No one wants to keep bringing her drugs, but the little girl was a compelling child character—something gaming could use more of.

The rest of the core Case West experience will be familiar to anyone who spent time with the two earlier incarnations of the series. Chuck can gather items to use as weapons as he travels throughout the facility. As he achieves goals and completes missions, he earns combo cards—cards that explain how to combine certain items into super weapons. These super weapons are great (they give extra PP for each use) but they break so quickly that they rarely justify running around to gather the components. A few of the new additions are fun (the BFG-cattle prod combo, for example), but regular weapons are just as useful in most situations. Plus, since players will encounter so many armed guards, Case West puts a real onus on the use of guns instead of melee weapons. It's an odd change of pace.

When one starts to add all these things up, a disturbing idea emerges—Case West is mostly just a phone it in cash grab on Capcom's part. Maybe that's cynical, but the bland and repetitive environments, a character that can't be controlled in single player, and the lack of much of anything new in Case West make the experience feel like filler content with a ten dollar price tag.

To be fair, this doesn't make Case West unenjoyable. The game does offer some new combo weapons to create and reveals more storyline (before leaving everyone hanging at the end with a set-up that seems likely to be the jumping off point for Dead Rising 3), but clocking in at under 3 hours in length and without the ability to import character levels and items from Dead Rising 2, this feels like a stripped down experience.

At any rate, Dead Rising 2: Case West should please gamers who haven't grown tired of Dead Rising 2's incessant zombie slaying. It's puzzling as to why Capcom feels this DLC is worth $10 when Case Zero was more fun (and half the price…), but fans of zombie games and Frank West will probably feel right at home here. Case West

doesn't bring much new to the table, but it does provide a few hours of entertainment.Rating: 6.5 out of 10.

Disclosures: This game was obtained via Capcom and reviewed on the Xbox 360. Approximately 2.5 hours of play was devoted to single-player modes (completed 1 time) and 0 hours of play in multiplayer modes.

Parents: According to the ESRB, this game contains blood and gore, intense violence, language, and sexual themes. Parents will want to take heed of the Mature rating on Dead Rising 2: Case West as this isn't really a game for the little ones. Being attacked by zombies is an intense experience that could scar little Johnny for life and the catharsis that's gained by wading into a sea of the undead with a chainsaw might be too much for younger gamers to handle. Plus, I think we're all traumatized by the site of Frank and Chuck in some of the game's more outrageous costumes…

Deaf & Hard of Hearing: Main story scenes feature subtitles, but hearing impaired gamers will miss out on the aural cues in the environment. Survivors call out for aid, meaning you'll hear them long before you see them—meaning a big portion of the game will be difficult to manage for our deaf and hard of hearing friends. This continues with the enemies—particularly the guards—who are often found in the sea of zombies by the player honing in on their chatter rather than through plain sight. The game isn't unplayable for the hearing impaired, but it will be more challenging than it would be for someone who can hear.

They probably shouldn’t have added a time limit. If the appeal of the game is in killing zombies, why rush the experience? Then again, you simply run out of ways to increase the difficulty, although time limits are kind of a cheap way to do it. I guess the art is in knowing when to have them and not pissing off players too much.

Unfortunately, the time limit has been around since the first Dead Rising. It’s always felt cheap to me, because my main complaint with the series it that it should be about slaughtering hordes of zombies and not racing a clock the whole way through.

I’m sure someone could come up with a compelling way to make a game that allowed me to slaughter zombies GTA-style, but the Dead Rising folks seem to have no interest in creating that type of game at this stage.

It’s a downer though.