When do I Actually Get to Play this "Game"? 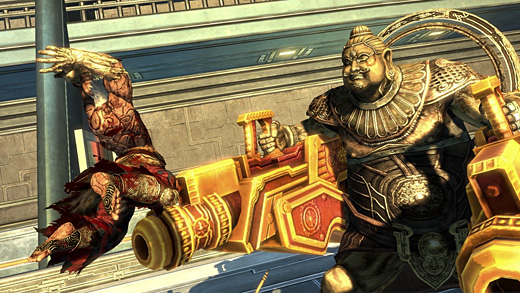 HIGH It's only six hours long, so my suffering was short-lived.

LOW So many options… how about the fact that I spent a huge chunk of that six hours doing nothing but watching a cruddy subpar anime masquerading as a video game?

WTF A character possesses a sword so large that it can stab through one side of a planet and out the other with length to spare.

Indie game developer Phil Fish caused a major Internet uproar recently when he told a colleague that modern Japanese games "just suck" while on a panel at the Game Developer's Conference. I tend to disagree with Fish's assessment of Japanese games, but I find myself thinking I'd probably have offered up the exact same answer had someone asked me what I thought of the country's output after playing Asura's Wrath

. Capcom's "game"—and I use that term loosely—is a perfect example of what bugs me about some of Japan's releases these days.

I'm hesitant to even call Asura's Wrath a game at all—it's really more of an "interactive anime." Anyone who knows me realizes that on the list of two-word phrases guaranteed to send me running from the room, "interactive anime" ranks just below "chick flick" and "ludology discussion." I'm an odd bird in that I like Japanese games (especially Japanese role-playing games), but I detest anime the same way Rick Santorum hates women having rights.

Despite my aversion to the form, I find anime tropes in games mostly tolerable, but Asura's Wrath seems designed more as some sort of otaku fanservice than a video game. I found myself wondering why developer Cyberconnect2 just didn't make this a DVD series instead of tricking gamers into spending hard-earned cash on something only pretending to offer actual gameplay.

I'm not exaggerating when I say the bulk of the six or so hours it takes to reach the end credits of Asura's Wrath are spent watching it. The game is set up like an episodic cartoon series (complete with credits over each new story segment and a "coming up next" teaser that literally spoils something major in every part of the game…) and features lengthy and ridiculous cut-scenes at every turn.

The story is about Asura, a demigod betrayed by his seven fellow deities. He must exact revenge on the gods who've wronged him, but it's all a nonsensical mash-up of God of War crossed with Eastern philosophy which also works in clockwork spiders, mutant apes, demigods larger than the planet they inhabit and The Iliad. It may sound fairly cool, but the story is dreadful, the dialogue is cheesy, and Asura is so one dimensional that the whole thing is painfully absurd. Asura makes The Incredible Hulk look nuanced and deep in comparison. 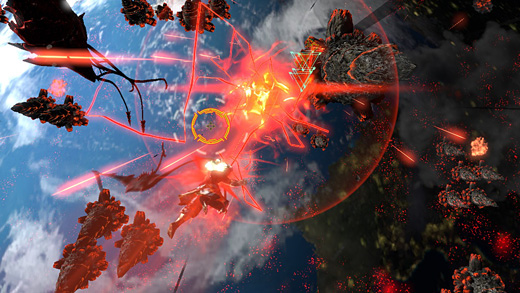 If one can get past the mind-numbingly stupid story, there's still the gameplay to contend with. Asura's Wrath occasionally allows the player to control Asura, but even that manages to be wholly unsatisfying.

Asura should be a blast to play—he's a rage-filled brute who can sprout multiple arms (and yet, he spends some portions of the game fighting with no arms at all…) and takes on gods who wield swords with blades longer than the diameter of the planet. He's like an Eastern version of The Incredible Hulk, but players will rarely get an opportunity to release all of the character's pent-up rage.

For whatever reason, Cyberconnect2 has decided that it would be absolutely fantastic if most of the game's encounters revolved around Quick Time Events. I'm here to assure everyone that this decision was wrong. Asura has a few non-QTE moves, but he basically uses them so he can fill up a burst gauge that allows him to launch a devastating QTE-based attack. Enemies either refuse to die or keep respawning until Asura fills his bar and unleashes this boring attack, thus ending the confrontation. This formula repeats throughout the entirety of the game.

I'm not a big fan of QTEs in general, and especially not in a game that should be heavy on action. There's also nothing like settling in for a cut-scene and missing a QTE because the developer thought it would be great to keep the player mashing buttons during the story interludes. Developers have to make a decision—either they want me to watch the cut-scene and enjoy the story they've crafted, or they want me to ignore the elaborately designed narrative interlude because my eyes are fixated watching for some stupid QTE icon to blip on my screen. It's pretty much a one or the other proposition. The only benefit here is that game doesn't punish players too severely for missing QTEs. Where failing one leads to a game over screen in many titles, it only seems to affect the level score in Asura's Wrath.

The only positives in the game come in the form of Asura's Wrath's visuals. This title was designed to mimic an anime series, and as such, it has an interesting graphical presentation. The character models are absurdly modeled, but that's what most fans seem to expect. The decision to make the characters look like woodcuts is at first disconcerting, but becomes interesting once one adjusts to it. The 2D animated stills before each episode are really quite stunning as well.

comes up amazingly short in that latter category. Even the presence of venerable voice actor Liam O'Brien can't save this mess. Those expecting a God of War type experience within Asura's Wrath are bound to be disappointed. Hell, those expecting a game are likely to feel some letdown because the bulk of Asura's Wrath is spent watching things instead of doing them. Hardcore anime fans will probably find something worthwhile here, but those looking for a solid action brawler would be well-advised to keep searching. Rating: 3.0 out of 10.


Disclosures: This game was obtained via rental and reviewed on the Xbox 360. Approximately 6 hours of play was devoted to single-player modes (completed 1 time).

Parents: According to the ESRB, this game contains blood, language, partial nudity, suggestive themes, use of alcohol, violence. If the content descriptors didn't give it away, allow me to clarify—this isn't a game for the kids. Asura's Wrath features loads of violence, drinking, a really weird scene in a hot spring, and other things that the under 13 set shouldn't be seeing.

Deaf & Hard of Hearing: Asura's Wrath comes with a subtitle option, so hearing-impaired gamers can enjoy the nonsensical dialogue in all of its quasi-mystical glory. Hurray.

Santorum is one of the Republicans running for President here in America.

Some of the guys I’ve talked to on Twitter have really liked Asura’s Wrath, but it didn’t work for me at all.

While I don’t know Rick Santorum, I can assure you that at least 1% of anime is actually really good.

The qustion would be, how good is this as an anime? Actually, scrap that, I don’t want to hold a controller while watching anime. Yeah, this seems like a hard thing to like.