For a Few Pennies More 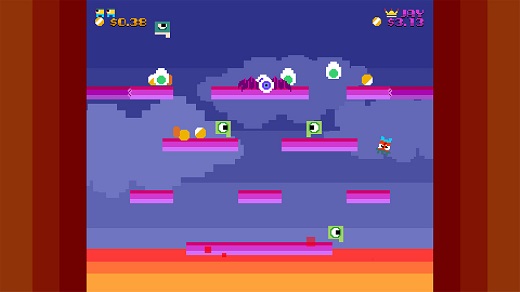 HIGH: Throwing a Woah Block at the last possible second.

LOW: Watching a Woah Block succumb to a self-destructing skull.

WTF: What you just thought after reading the above.

It used to be that graphics were too primitive to sell adventure on their own, and the illustrated sides of arcade cabinets featured embellished extrapolations of simple pixels and geometries. Woah Dave! hails from this time.

…Except that it doesn't.

The latest from Choice Provisions of BIT.TRIP fame, Woah Dave! is a self-conscious homage to arcade games with a postmodern wrinkle.

Players assume the role of Dave Lonuts, a stack of rectangles with a sprightly step and a name that would be at home in a Pynchon novel. Dave's world and all the objects in it are lovingly rendered in Atari 2600 crudity, so it falls to the game's splash screen to put a more dynamic picture in the player's mind. Here Lonuts resembles a distressed booger in high tops. He's menaced by one-eyed flying tentacle monsters—think Ed Roth channeling H.P. Lovecraft.

The game is set in a Mario Bros.-like tableau of floating purple platforms that hover above a pit of magma. Dave can jump and throw objects (eggs or skulls) both of which fall ceaselessly from the sky. Wait long enough and the eggs will hatch critters that mean Dave harm, so either smash one egg into another before it hatches, smash an egg into a critter in order to kill it, or smash a skull into either critter or egg.

Did I mention that the skulls are basically time bombs? Throw them in time or be thrown yourself.

This is the world of constant threat in which I struggled, and still struggle to survive. Complicating matters is the fact that should an enemy reach the magma, it will transform into one of several other enemy types, each of which threatens Dave differently. The magma also rises as the game wears on, making it increasingly likely that enemies will overwhelm the player.

Each vanquished enemy leaves a penny in its wake. Collecting pennies drives up the player's score, which increases the pace of the action. Eggs fall more rapidly, skulls less often. Enemies hatch, scramble to the bottom, mutate—the situation grows more and more perilous before the third and final object comes to your rescue. This, the titular Woah Block, is a none-too-subtle nod to the POW block from Mario Bros., which it resembles. The only difference is that Dave can hold it aloft, jump around with it, and throw it to the ground at the last possible second in order to avoid catastrophe.

Here, then, is the game's classic risk-reward dynamic—by grabbing a Woah Block and dodging danger until the screen is filled with enemies, the player increases the likelihood of a fatal misstep, but also fills the stage with loot when the block wipes everything clean.

This mad scramble is exhilarating. Each narrow escape filled me with a heady combination of relief and joie de vivre, but each death was crushing—not because I'd lost one of three chances to best my high score, but because the fevered tempo ground to a halt. The music stops, the action resets, and I'm pulled from this curious delirium.

When all three of my lives are spent and the game truly ends, it's almost unbearable to begin again. Everything crawls, and it takes a seeming eternity to earn my way back to the high level of play at which I mentally merge with the game.

Is it unfair to hold this against Woah Dave!? Probably. But I find myself reluctant to return to it after a good run. It's not just discouraging to begin at the bottom of the ladder, but dull, too. Take me back to the top rung again that I might juke, jump, throw, curse, and Woah. If I can't get back immediately, then I'll take my egg and go home.

Maybe this is the point, though?

In an arcade, when I'd messed up one too many times at Joust or Mappy, I'd take my quarters to another machine. So it is with Woah Dave!, which provides a pleasant foil to long, engrossing, story-driven games. Dave will eagerly steal 10 or 15 minutes from you here and there, and as a palate cleanser between longer games, it excels. But the climb back to the late-game point at which you bought the farm? It's more bummer than woah. Rating: 6 out of 10.


Disclosures: This game was obtained via paid download and reviewed on the Vita. Approximately 4 hours of play were devoted to the single-player mode, and the game was not completed. There are no multiplayer modes.

Parents: According to the ESRB, this game contains mild fantasy violence. Mild as mother's milk. A drawer of socks is more upsetting than Woah Dave!

Deaf & Hard of Hearing Gamers: Game music gains layers as players progress, but this is hardly the only measure of advancement. In short, Woah Dave! can be enjoyed by players with all levels of hearing.

The change after dying does suggest that Dave is hallucinating, though not sure if it has any real significance or is just there as a mind-screw for the sake of being a mind-screw.

There might be something to that, Jim. What do you make of the abrupt change in scene upon game over?

I’ve read through this about three times now trying to get a grasp on the concepts of the game. Definitely sounds like a mid-80s drug trip made real.