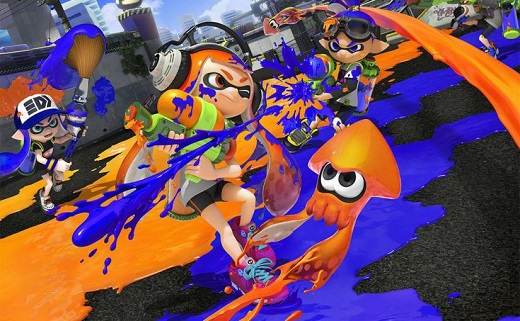 WTF: The post-apocalyptic story. No, really.

Splatoon is a game about color. Color as a noun, color as a verb. If ever a game were alive with the joy of color itself, it's this one.

Splatoon has been described, incorrectly, as Nintendo's first shooter. Polygon's Ben Kuchera would have us not call it a shooter at all, describing the designation as part of "a tendency to want to shove new ideas into existing columns." Fair enough: we humans can't help but classify things. Nevertheless, Splatoon is a shooter, though unlike any shooter I've played before.

For starters, there are no bullets, only weapons that splash and spew ink. Players earn points for every inch of territory they cover, and after three minutes the team that covers the most turf wins. The objective, then, is not to shoot the other players, although doing so confers an obvious tactical advantage. Rather, the goal is to shoot the ground. It's hard to overstate how profound an inversion this is.

Moreover, the game dispenses with the peekaboo of cover systems in favor of traversal mechanics that are as fresh and frenetic as the mess-making. As Inklings, players are both kids and squids (this is cuter than it sounds). In kid form, players run about on two legs, but as squids they disappear into ink and swim swiftly and silently through it—down pathways, over ramps, and even up vertical inclines.

Splatoon's cartoon aesthetic belies its deep strategy, of which traversal is just one part. The rest belongs to an abundant selection of weapons, each of which fundamentally changes one's approach to combat, and to the various arenas with their unique topographies and blind corners.

Turf wars constitute Splatoon's primary mode with the goal of panting the ground, designed for players of all ages and skill levels. Ranked battles offer different kinds of play for those willing to be judged on their performance.

One type finds teams fighting to control a tiny piece of turf called a "splat zone." In another, a novel tweak on tower defense, the contested ground is a mobile platform that floats along a set path toward the opposition's base. The first team to drive the tower home wins, but every second until that point is a frenzy of reversals, near-misses, and heartbreaking ambushes.

In addition to the different modes, Ranked Battles also record player performance in letter grades, and for some, moving up the ranks will prove strong incentive. To be sure, nothing tops the heady blend of exhilaration and relief that accompanies a hard-scrabble, buzzer-beating finish. However, I frequently found myself on the losing side of a ranked match… then two matches, then five. Often, I squared off against players so in sync that the outcome was determined in mere seconds, making the rest of the match an interminable grind.

After a rapid rise to a coveted "B," I found myself sinking to a soggy "C+". Exhortations to "git gud" aside, I find that evaluation curtails the fun, and cuts against the playful spirit in which the game was crafted. This is doubly true when a team suffers dropouts and connection issues, which continue to plague the game more than a month after its release. Speaking of online issues, Splatoon was designed for online multiplayer play, so its long-term value depends on Nintendo's ability to maintain an active community.

Online aside, the game also features a robust single-player mode that functions as a tutorial, one of the best ever designed. It features some of the company's most innovative platforming since Super Mario Galaxy, including sponge platforms that enlarge when inked and invisible pathways that players color into existence.

Tying everything together is Inkopolis Plaza, a central hub that provides access to game modes and the shops in which new gear and weapons are acquired. It's Shibuya with a Nickelodeon makeover, and it's populated with a random assortment of other players and their Miiverse memes. In an inspired touch, the plaza transforms into an all-night dance party during Splat Fests, 24-hour contests in which players pick a side and fight for their team's victory (in the first-ever Fest, I played for Team Cat, and took a licking by Team Dog).

For all the creativity in its design, however, Splatoon's most winsome quality is its inclusiveness. It offers what should be standard features in all games of this kind: the ability to choose your gender and skin color, to truly see yourself inside the game. After well-deserved PR bruisings over Animal Crossing's lack of skin tones and Tomodachi Life's enforced heterosexuality, Splatoon demonstrates that Nintendo is finally becoming cognizant of its global audience, and of the many different people who play its games.

This time, it has sincerely tried to make a game for everyone, and in my view, the company has succeeded admirably. Splatoon is Nintendo's best game in years. Rating: 9 out of 10

Parents: According to the ESRB, this game contains cartoon violence and "online features that may expose players to unrated user-generated content."

Deaf and Hard of Hearing: I played well without sound, but awareness of enemy positions can depend on audio cues. Sometimes I died quite suddenly when I couldn't hear an Inkling behind me. And I'd be remiss if I didn't mention the superb music by composers Toru Minegishi and Shiho Fujii. Matches lose some of their momentum and excitement without the game's strange brew of J-pop, hip-hop, punk, and reggae.

Not so much a “profound inversion” , but engagement diversion.

Since you spend most of this game engaging with walls and floors by shoot or roll-painting them, instead of enemies or online players, what camparitve engagement level is is possible with that ?

I played for three hours and couldn’t stand no more.

This game comes baked with huge engagement Philosophy flaw.
it’s obvious before you play the game and worse while playing it.

I don’t really mind the ranking system; yes it can be discouraging to keep losing multiple battles in a row, but more often I just have fun splatting opponents and marking as much territory as I can. Maybe that’s just me though. What I do think needs to be improved is how teams are assigned. When I started out, I was regularly paired up with and against people who were at least ten levels higher than me. It can be off-putting to new players who still don’t have access to the better gear.