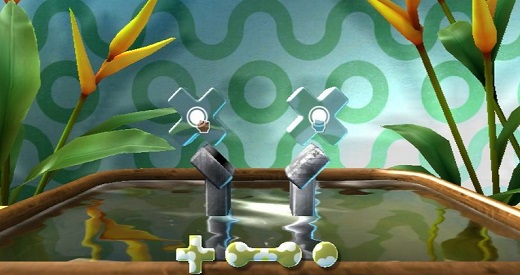 Oh, the difference a single part of speech makes.

To wit, the game is called Art of Balance, not Art and Balance. In Shin'en Multimedia's game of block stacking, any combination that remains standing for three seconds is good enough, no matter its aesthetic effrontery… And that is the game in a nutshell.

Each of its 200 stages confronts the player with a stone basin full of water, an assortment of blocks, and the expectation that he or she will stack those blocks in some fashion that won't tumble down to a watery demise.

As the player advances, she'll handle blocks with different properties: some can hold only two blocks before breaking; others shatter after a timer runs out. But the fundamentals—basin, blocks, balance—remain unchanged.

The mechanics are simplicity itself. Using the GamePad's stylus, players drag and drop blocks into place. They can be rotated like Tetris pieces by pressing a shoulder button, and that's it. Stages sometimes subvert expectations by introducing asymmetrical and unstable platforms or by introducing a time limit, constraining one's ability to futz about.

The rest is up to experimentation, intuition, and physics.

Players build against backdrops of Zen-like calm. Stages cycle between meditative tableau, including painterly backdrops and the satisfying symmetry of a Japanese tea house. Green plants reflect warm sunlight. A solitary lamp casts deep shadows in the folds of a carefully draped sheet. Floating through it all is Martin Schioeler's groovy softcore soundtrack.

But, make no mistake: despite its Valium trappings, this is a game of nervous tension. I breezed through the initial stages, but this only deepened the shock eventually encountering the Tower That Would Not Stand. When I finally, precariously placed that last block, I held my breath as if its release would disturb the pieces on screen. This is a rush of triumphal glory to equal any victory in Super Smash Bros.

Speaking of Nintendo's premier brawler, who knew that 2014's best co-op would be found in stacking, not smashing? Art of Balance is made for passing the GamePad back and forth between stages or when frustration mounts. I played it with my girlfriend; we shared suggestions for strange architecture and wailed together when towers came toppling down. It's here that Art of Balance most closely resembles Jenga, the classic party game of shared destruction, only the objective is to build, not destroy.

Arcade mode consists of the 200 aforementioned stages. Completing them takes about ten hours, depending on the player's acumen for proportion and harmony. Three multiplayer modes extend the game indefinitely, however. Endurance gives the player three tries to complete as many stages as possible. Swift Stacker, which can be played on- or offline, is exactly what its name suggests: the first to finish wins. Tower Tumble is basically Jenga. Players take turns placing pieces, and whoever is last to touch the tower before it collapses is deemed the loser.

The total package is a game of deceptive brilliance. Its screenshots convey little of what makes it so compelling: the pleasure, carried over from childhood, of building crazy structures that remain standing by counterbalance, of course, but what always feels like magic instead. Rating: 8 out of 10.


Disclosures: This game was obtained via paid download and reviewed on the Wii U. Approximately 9.5 hours of play were devoted to the single-player mode, and the game was completed. 1 hour of play was spent in multiplayer modes.

Parents: The ESRB provides no content descriptors for Art of Balance, but it's hard to imagine a more inclusive game. Profanity originating with the player is highly likely, however.

Deaf & Hard of Hearing: Gameplay does not rely on audio cues. The aforementioned countdown is both audible and visible.