Meow to Tail a Story 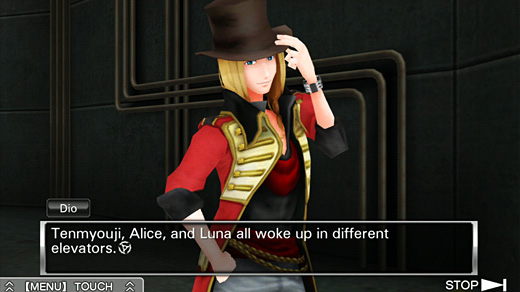 LOW Getting stuck because I couldn't see the one object I needed to interact with.

WTF How every character seems to possess advanced knowledge of quantum physics.

is the second of Chunsoft's Zero Escape series, the first of which was 999: Nine Persons, Nine Hours, Nine Doors. Like its predecessor, Virtue's Last Reward is a visual novel in which nine people are trapped in an unknown location and must team up in order to escape. To do so, players must work through locked rooms while in the dark about everyone's true intentions.

Story is the game's driving force, and it never lets up. The main character, Sigma, is a college student who was abducted by a masked figure. He awakes sometime later to find himself trapped in an elevator with a young girl named Phi. She knows Sigma's name, but she isn't quite sure how. After solving a brief set of puzzles and escaping from the elevator, the two find themselves in a warehouse with seven others who have also been captured.

These nine individuals are being forced to play a game in order to earn their freedom, and throughout the campaign, players must make decisions on who to team up with, who to trust, and how much to trust as they seek a way out of their confinement.

The game takes a great number of twists and turns throughout, and at any point in time, players can pull up a flowchart to see which path their decisions have sent them down. It's very helpful to keep track of the game's multiple endings, especially with many paths leading to an untimely demise for Sigma.

However, despite the flowchart implying otherwise, Virtue's Last Reward is not a strictly linear game. Players can (at any time) jump back to sections where they were forced to make a choice and can then make the opposite decision to see where it leads. In fact, doing this is necessary to progress and to view the game's true ending. That said, it's not quite accurate to call these different branches "endings," as they simply tell one aspect of the overall story, further elaborating on the game's central narrative from different perspectives.

While occasionally clouded with metaphysical nonsense and scientific references to obscure concepts, the plot is actually quite easy to follow, even if it doesn't always make perfect sense. Like a good mystery, key points are revealed at regular intervals and others are kept well hidden until the right moment. Different story branches develop characters, and players will see how they react to decisions that are made. (Most don't take kindly to being betrayed, but that's often what is required into order for someone to show their true colors.)

From a play standpoint, this means that the player must sometimes make decisions that wouldn't normally be chosen for the sake of advancing the plot. Unfortunately, it's at these times when the player realizes their decisions ultimately don't matter—only experiencing as many different outcomes as possible does. Virtue's Last Reward may grate a little as it becomes less of a "choose your own adventure" game and more of a "do everything in order to see the true ending" experience. Thankfully, the story payoff is worth the disconnect.

While I've spent most of this review talking about the story, this isn't just a straight visual novel. Between narrative sections are puzzle rooms where players must interact with objects to locate a key that will unlock the exits. The puzzles vary in difficulty, but players can swap to easy mode at any time should one prove too difficult. These challenges are simply a means to an end, though. The real meat of Virtue's Last Reward is the interaction that takes place between characters. With that in mind, be aware that playing it with no knowledge of 999 might put the player at a disadvantage when it comes to understanding the full story and subtle hints dropped toward future titles.

takes everything that 999 did well and does it better. The story is more focused (even if still a little convoluted), the characters are better developed, the gameplay mechanics have been greatly improved, and the twists will keep players on edge until the end. Those with no prior knowledge of 999 may be at a slight disadvantage when it comes to grasping the plot's nuances since it's technically a sequel, but players in the market for a fantastic visual novel bolstered by interaction and choice would do well to try it out anyway. Rating: 8.5 out of 10.


Disclosures: This game was obtained via publisher and reviewed on the Vita. Approximately 27 hours of play were devoted to the single-player mode, and the game was 100% completed. There are no multiplayer modes.

Parents: According to the ESRB, this game contains blood, drug reference, sexual themes, strong language and violence. The blood and violence are most in the form of encountering gruesome death scenes after a murder has been committed. Drug references are minor and minimal. For sexual themes, it is mostly simple innuendo along with some very revealing clothing on one character. As far as strong language, there is a lot of it all throughout and it's hard to avoid.

Deaf & Hard of Hearing: The entire game is playable without sound. Everything necessary for play is displayed on screen, and at no point did I find that audio cues were necessary. All voiced dialogue is subtitled.

Nice write-up. AS a fan of 999, I was looking forward to this follow-up. This game needs more attention. It is just oo much quirky fun to keep getting overlooked by anyone other than hardcore visual novel fans.