We Battle Together with Friends… but Why? 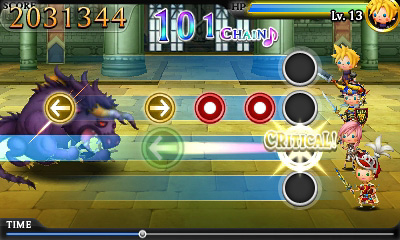 LOW Having to play the same tracks over and over to unlock new features.

If ever there was a series designed to support a rhythm game spin-off, it's Final Fantasy. With a twenty-five year history and well over a thousand pieces of music to choose from, all of the ingredients for success were in place. When Theatrhythm: Final Fantasy

launched on the Nintendo 3DS, it seemed like it was destined to be a nostalgia-packed masterpiece. Unfortunately, while the final product is great fan service, it's likely to leave many wishing there was more to it.

Theatrhythm is (surprise!) a music title with minigame-style stages set to classic Final Fantasy music. The main mode is divided into sections based on the thirteen main Final Fantasy games. For every one, players will complete five different segments, each with a different track. The game grows slightly in complexity from there, but players will be consistently tapping, swiping, and holding the stylus down on circles and arrows that appear on the screen. The more accurate the timing, the more effective the action is.

In other sections, prompts will flow across the screen requiring precise up and down movements along with rhythmic taps and releases as a character ventures across an role-playing game-themed field. Battle stages are similar in execution, though they're visually represented by a four-character battle against multiple foes. Prompts scroll toward each character, and the player must perform the actions in order to defeat the enemies. This main mode is fairly straightforward, with the basic course being quick and easy to complete. After a successful finish, additional difficulty levels open up starting with Expert and then Ultimate. 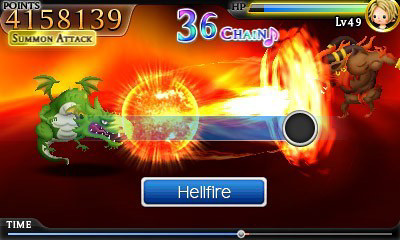 Challenge mode is the game's second offering, and beating stages here (or in other additional modes) earns experience points for party members and "Rhythmia" used to unlock hidden features such as bonus videos, audio tracks, or in-game collectable cards. There isn't much depth to the game overall, but earning points is necessary to access new content. While replays are enjoyable enough at first, it eventually starts to feel stale. There's little to drive players back to these same tracks more than just a few times.

Besides this shallow feeling, many aspects feel lazy. For example, there are about seventy tracks (with more available as DLC) but there should have been more. With over a thousand pieces of series music to draw from, this selection feels too limited. Another area that needs work are the "event" scenes. These scenes highlight memorable in-game moments such as becoming a paladin in Final Fantasy IV, or Squall and Rinoa's dance in Final Fantasy VIII. Bizarrely, the text for these is still in Japanese. Every game in the series has been localized, so the fact that Theatrhythm still uses the original text is ridiculous.

Those things are problems, but Theatrhythm's biggest failing is its lack of a story mode—a stupefying oversight in a title based on the most famous role-playing game (RPG) series in history. As a whole, Final Fantasy contains a vast number of characters and fantastic settings, but Theatrhythm is content to use these as set dressing. There's no overarching mash-up narrative, characters have no dialogue, and making a party is ultimately meaningless. Even a minimal plot could have helped add depth to this simplistic experience.

It's also worth noting that Theatrhythm is without any social aspects outside of the standard 3DS StreetPass, which sees less than optimal use within North America. There are no online leaderboards, no online multiplayer, and no way to play with friends outside of a local-only wireless mode, so it just feels… lonely. Playing and replaying the game's collection of tracks is nice, but the lack of depth is impossible to ignore.

starts off as a celebrated adventure through the musical history of the long-running Final Fantasy series, and the fanservice is apparent and appreciated. However, after only a few hours, the nostalgia wears off and the experience loses its luster. There's just too little to drive this title forward, and without more substance, even the best fanservice in the world will start to lose its appeal. Rating: 6.0 out of 10.


Disclosures: This game was obtained via publisher and reviewed on the 3DS. Approximately six hours of play were devoted to the single-player mode, and the game was completed. Zero hours of play were spent in the multiplayer mode, as that mode is only available via local wireless play with others who have the game and therefore was not accessible.

Parents: According to the ESRB, this game contains fantasy violence, mild blood, mild language, suggestive themes, use of tobacco. The fantasy violence contained in this game is very minor. It merely consists of players performing taps and swipes on the screen while characters battle foes in the background. It's very mild and enemies simply fade away when defeated. The suggestive themes are merely scantily clad characters and enemies, nothing extremely inappropriate.

Deaf & Hard of Hearing: This game is heavily focused on music and rhythm, though all of the main gameplay modes can be completed without sound. There are on-screen prompts for each action that players need to make, so while the musical experience would be lessened, the game is still playable. There is no voiced dialogue.