A Shift in the Right Direction 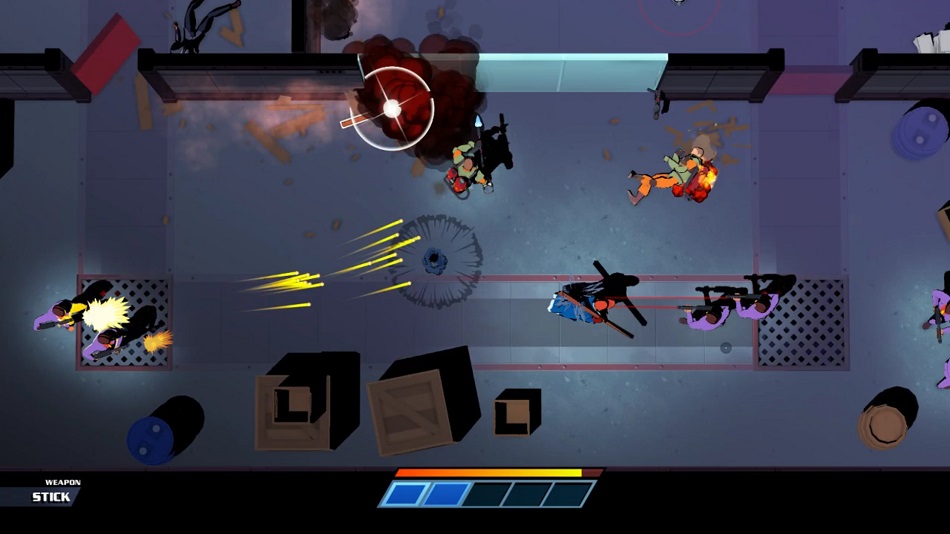 HIGH Taking out a line of guards by tossing a shield.

LOW Breezing through an area, only to repeatedly die at the end.

2012 brought Hotline Miami, a brutal action game with an addictive rinse-and-repeat gameplay loop. In it, players must take their fragile character into areas filled with dangerous foes and clear them out without taking a single hit. It’s easier said than done, and this isn’t an idea that’s been copied until now, with Mr. Shifty by Team Shifty. Although similar-feeling mechanically, the devs replace Hotline Miami’s mind-twisting story and ultraviolent combat with a pun-filled, silly narrative where the main character can warp around like the X-Men’s Nightcrawler.

The titular character, Mr. Shifty, is a thief sent on a mission to steal valuables from the high-rise tower of the sinister Chairman Stone. He’s guided on this task by his handler, Nyx, who makes bad puns and pokes fun of videogame tropes through her dialogue. Shifty has two main tools at his disposal: punching things and warping short distances. Despite enemies packing heat, Shifty sticks with hand-to-hand combat, which also includes tossing and swinging found items.

Weapons don’t play a critical role in the game, but even a pillow can be thrown at a large guard to take him down in one hit. Other weapons like the staff can smash up a handful of foes before it breaks, and there are rare items — there’s nothing quite like having a line of enemies charging in and tossing a trident down their line, taking them all out at once.

As important as smashing up foes is, dodging out of the way using Shifty’s warping ability is critical. This is not unlimited — only five warps are possible before a recharge is required, so players will have to use it sparingly. Considering guards often outnumber Shifty, it’s ideal to use this skill to move into an area where he can even the odds and take them out one at a time. It can also be used to move behind foes and to warp through walls to avoid gunfire, security lasers, or homing missiles. There are some stages where there are anti-shifting fields set up, so players can’t use it as a crutch through the whole game. 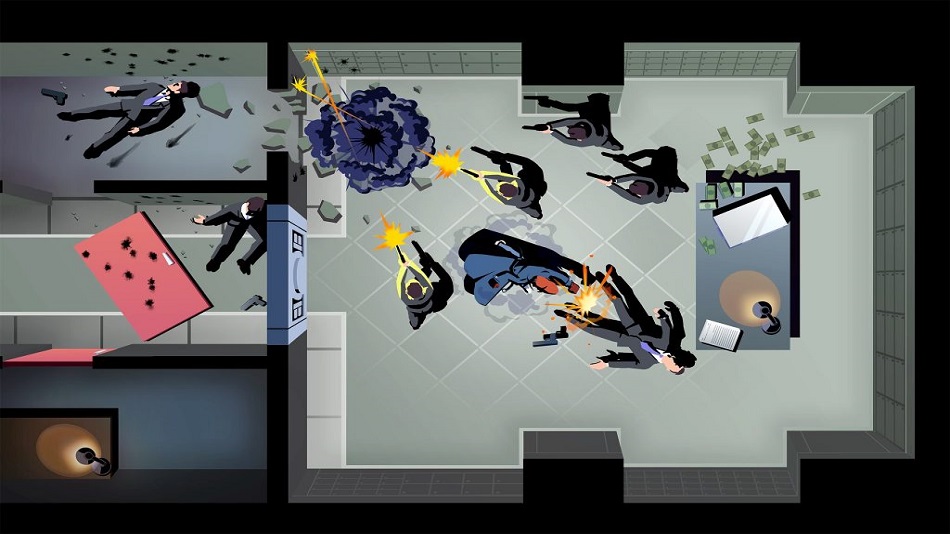 Much like Hotline Miami’s main character, Shifty has a delicate constitution. One shot, explosion, or punch can mean the end. There will be times when fighting gets chaotic and it just isn’t possible to avoid everything, so there’s also a bar that fills as enemies are defeated. When full, this bar can slow time when Shifty is about to be hit. Move out of way, and things are fine… But honestly, sometimes death is inevitable.

Thankfully, going down only means a quick restart at the beginning of the room. Some areas are larger than others, so it can get a little frustrating to make it nearly to the end of a massive section only to have to do it all over. However, none of the stages were so difficult that restarting became a major problem, it just made for a few tedious segments to work through.

It’s also worth noting that there’s a bit of slowdown when the screen is filled with enemies, but it was never too problematic. The game also crashed once during five or so hours of play, but it happened at the end of a stage and no progress was lost.

Clocking in at around five hours, Mr. Shifty struck a good balance for me between wanting more versus wearing out its welcome. I enjoyed my time with it despite some of the later levels being slightly frustrating and the finale being a little anti-climatic, but overall, this is a solid addition to the Switch’s growing library. Rating: 8 out of 10

Disclosures: This game is developed by Team Shifty and published by tinyBuild Games. It is currently available on Switch and PC. This copy of the game was obtained via publisher and reviewed on the Switch. Approximately five hours of play were devoted to the single-player mode, and the game was completed. There are no dedicated multiplayer modes.

Parents: According to the ESRB, this game is rated T and contains Violence. This game is aimed directly at teens and older, though the violence in the game is not graphic and there is no blood. Mr. Shifty will punch and kill foes, but they do not die brutally. He can be shot, punched to death, or blown up, but it’s very cartoony.

Deaf & Hard of Hearing Gamers: All dialogue is subtitled, and audio cues are not critical to gameplay. I played most sessions without sound and had no issues at all.