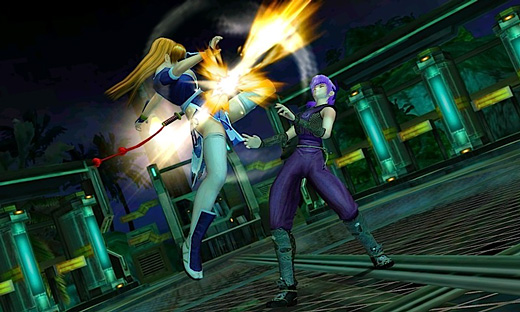 Highly sexualized designs have been a staple of the Dead or Alive series since its creation. All of the games' female characters in this series are endowed with large, bouncing breasts and provocative clothing. This feature has been a draw to many, even spawning a mini-game spin-off where the women of the series participate in volleyball and other beach games wearing bikinis. Underneath this thin layer of clothing is an easily accessible fighting game, but there is just not enough content to support it.

is a game that spans the entire series, cramming the story from all prior games into the Chronicle mode. Unlike other fighters which allow players to select a character and see the story from their perspective, the narrative mode of Dimensions instead only shows select chunks from prior Dead or Alive games. In doing so, it never gives players a choice as to who they control, making this a limited experience.

The Chronicle mode also suffers from a lack of focus. Though it is broken up into chapters, it feels more like a haphazard collection of cut-scenes than a coherent narrative. Often a short scene will play before transiting to an unrelated series of battles and then jump straight to another completely unrelated cut-scene. It's off-putting and lazy, making for a shallow experience where players are given little to no options.

Dimensions does offer the normal gamut of additional fighting game modes, but these lack depth. The Arcade mode consists of three easy paths, two normal and one hard, but not even the toughest one offers any challenge. Each will only take a couple minutes to complete, as they are only against a handful of characters, leaving little else to do afterward.

Survival mode ends up being the most enjoyable part of the game, because it is the only one that lasts longer than a couple minutes. Here, players select a character and then battle a constant stream of combatants with a boss character tossed in every ten fights or so. Though, other than requiring constant attention, it's also not even remotely challenging until the final series against 100 fighters. 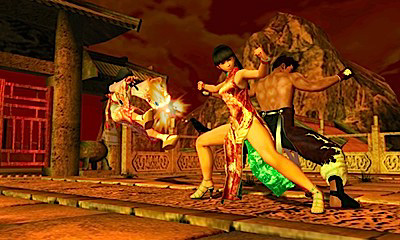 On the other end of the spectrum is the Tag Challenge, where the main goal seems to be to cause frustration. After the first few battles, the difficulty ramps up so much that someone who only casually enjoys fighting games will likely lose interest. For a tag mode where players are supposed to use multiple characters, when the main character is knocked out, the assisting character will jump in to buy time for the main combatant to recover, but the player can do nothing with them. It's a pointlessly irritating mode that feels completely out of place.

Plowing through all these modes to unlock all of the rest of the game's twenty-six playable characters would be more enjoyable if there were more to do with them afterward. The only bonus content beyond a few extra characters is a collection of figurines and additional costumes. A little more depth in the existing modes or even having an adjustable difficulty would have gone a long way.

It's a shame that all of these modes feel so half-hearted, because at the core of the game is a solid fighting system that is easy to pick up and play, even for gamers who might not be very experienced with fighting games. Dimensions controls amazingly well and is easily one of the smoothest playing fighters ever to grace a portable system. If the game only offered a little more depth, it could have been fantastic.

Internet play works surprisingly well, giving players more options that just the limited local area experience. It is currently quite easy to search and find a match globally, and fights remains fairly stable throughout. One shortsighted issue is that once a match is over, players are kicked right back out to the mode select screen, making it a bit inconvenient to play multiple online matches. It's just another area that is lacking in refinement.

Dimensions is a visually impressive game. Even the 3D effect is used in a way that adds a bit of flair instead of just feeling like a tacked on feature. In matches, 3D adds depth to environments and actually gives the explosions and crashes that occur around the stage more impact. In the end, the main focus of Dead or Alive's visuals is still breast physics and panty shots, and sadly, the game seems to go out of its way to work those in.

From its misogynistic overtones to its lack of depth, Dimensions is a shallow experience. The core gameplay is really enjoyable and that makes it even more insulting that so little is done with it. After a few hours of playing through the borked story mode, the only thing players have left to do is to spend one or two more playing the brief arcade modes to gather unlockables. One can only hope that Tecmo takes the foundation here and puts it to good use on another fighting game with some substance. As it stands, Dead or Alive: Dimensions

looks great, plays great, and fits fantastically on the 3DS, but as is befitting the tone of the series, its beauty is only skin deep. Rating: 4.5 out of 10.

—by Michael A. Cunningham

Disclosures: This game was obtained via retail and reviewed on the Nintendo 3DS. Approximately 6 hours of play was devoted to single-player modes (completed 1 times) and 1 hours of play in multiplayer modes.

Parents: According to the ESRB, this game contains blood, mild language, partial nudity, suggestive themes, use of alcohol, and violence. There is murder, assassinations, violence, and violence against women. There is also a lot of over-sexualization of women with lots of cleavage and bouncing chests.

Deaf & Hard of Hearing: There is an option for subtitles for story dialogue, but no other essential audio cues.

As the review, I can speak to the multiplayer parts. I’ve played tons of Dead or Alive multiplayer on consoles over the years. I’ve always loved that the series is easy to get into. The issue here with Dimensions is that the multiplayer aspects are a pain on the 3DS. I had no option for local play as I know no one else around here with a 3DS, so that was not an option. Instead, I opted to play the online mode. It was not great. As I state in my review, “It is currently quite easy to search and… Read more »

the reviewer says its functional and works well, but that all in all the game is weak. You’re coming from a POV of the reviewer NOT playing the online, but they did. They just didn’t love it. And as for old franchises needing a reboot? The current Street Fighter is a great example of injecting new life into an old series. Dimensions plays no different than it did the Dreamcast day.. it’s just a lower framerate now.

“Gameplay that’s been done to death” Is there a current fighting game series that stands out to you as having particularly fresh or unique gameplay? I’m talking strictly the core human vs. human gameplay, not single-player content. Please leave story modes, cosmetic customization options, and other non-essentials out of it. Personally, I can’t think of any. For the most part, they pretty much stick with tried and true formula. I don’t think Dead or Alive’s gameplay has been “done to death” significantly more than other fighting game series. What keeps competitive multiplayer games fresh is the human factor. If all… Read more »

I can see what your saying but I think it’s very important to review the single player side of ALL games. Espescially when we’re talking about a game on a portable system that many of us use quite a bit while away from our wireless routers.

yes but the reviewer competently explains the underlying fault of the series; namely, a vaguely creepy misogynistic bent, and gameplay that’s been done to death already. Multiplayer does not not enhance what already was a tired game last generation. And with Nintendo we’re not exactly talking about a ROBUST online community, anyway. I remember beating the crap out of Kasumi with Ayane 10 years ago on my Dreamcast.. has something changed? Call a spade a spade, already. This series is behind the times.

“From its misogynistic overtones to its lack of depth, Dimensions is a shallow experience. The core gameplay is really enjoyable and that makes it even more insulting that so little is done with it. After a few hours of playing through the borked story mode, the only thing players have left to do is to spend one or two more playing the brief arcade modes to gather unlockables.” Or players could actually dig into the meat of the fighting game experience, competitive multiplayer, and enjoy far more gaming hours. Reviewing a competitive multiplayer game such as a fighter from a… Read more »