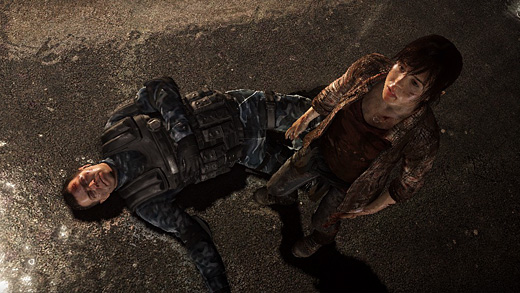 WTF Wishing it had Heavy Rain's more complex QTEs to add some depth.

David Cage and the team at Quantic Dream are well known for the cinematic experiences they bring to gaming. This focus took off in 2005 with the paranormal adventure Indigo Prophecy (aka Fahrenheit in Europe) and shined in 2010's murder mystery, Heavy Rain. Beyond: Two Souls

is Quantic's latest, and while it looks great and has solid voice work, it takes big steps in the wrong direction.

Beyond is the tale of Jodie, a mysterious girl who has been bound to a bodiless entity named Aiden since birth. Like their other titles, gameplay takes place in third-person with a mix of real-time interaction and quick time events. Players control both Jodie and Aiden, but there is an option for a second player to take on the role of one or the other.

In an effort to make the game more accessible and less reliant on complex button presses, Quicktime Events (QTEs) largely involve pressing the correct direction on the thumbstick in order to dodge, or rapidly pressing a single button to escape pursuit. Sadly, this new system is too simplistic to provide any challenge, and the few times it tries to ramp things up, it results in a mess of button mashing and imprecise thumbstick movements.

A big problem is that Beyond doesn't show which way to press the stick, but instead tries to give visual cues the player should watch—cues like following the direction Jodie's throwing a punch. This would be great if the camera angle didn't change during some of these sections, making it hard to tell which direction is the right one. Heavy Rain's more complex one-to-one mimicking interactions are still used, but very infrequently. What's left feels disjointed.

Narratively, the game is broken up into non-linear chapters that take place throughout different points in Jodie's life, which means hopping from her teenage years to adulthood, to time as a young child, and then back again. While telling the story like this offers the potential for interesting perspectives, it never has the impact it should. The problem is that the plot never goes anywhere—there are very few twists, and anyone paying attention will see them coming a mile off.

The game's choices also feel restricted and binary. It's hard to say if this is because the developers were unable to create narrative cohesion due to the nonlinear storytelling, but it just doesn't work. One early scene deals with Jodie as an awkward teen trying to fit in with a group of kids at a party. She's out of place and easily picked on, and in the end the player has to decide how best to handle the situation. Either option leaves her unwilling to trust again, yet in a similar situation in her future, she shows no signs that the earlier event had any impact on her. The game does offer a few minor story twists based on subtle decisions, such as having an event in the past change how a date goes in the future, but the overall story doesn't seem impacted by these in the long run. 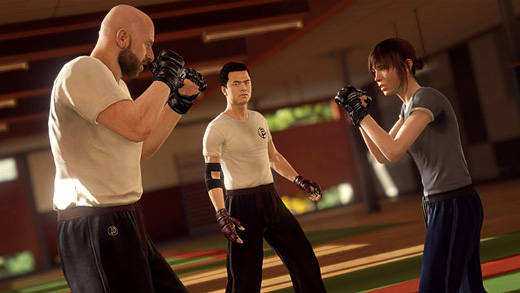 Along with Jodie's interactive sections, players also get to control the disembodied Aiden. These instances generally involve tasks such as unlocking doors, scouting ahead, disturbing objects to distract people, and even taking over another person's body. With Aiden, players are given the option to be destructive or even to harm people—potentially interesting, but these functions are rarely used as more than a supplement to Jodie's actions. For example, there are times when Aiden can destroy things in a fit of rage, but it serves no purpose other than a visible blowing off of steam. It adds a little of the player's own personality to the moment, but little real impact.

The relationship between Jodie and Aiden also has great potential, though it's up to the player to determine how strong their connection is. Whether Aiden is friendly, passive, aggressive or protective is based on what the player decides, and that impacts how players feel about their bond. One of the better scenes involves Aiden and Jodie dealing with an event after escaping from being grounded. Players can be smart and get out of this bad situation on their own or use Aiden to take care of things once they start going bad. It adds a touch of much-needed personality into the game, but these moments are still too infrequent.

Despite Beyond's non-linearity doing it few favors, there are still some enjoyable moments. The relationship with one of Jodie's caretakers, Cole, is the best developed and most believable in the game. Players can truly feel the connection the two have, and it holds up. Hearing Cole refer to adult Jodie as "his princess" works because their familiarity is developed in every stage of her life. There's meaning behind it, and the game does a great job of building it up.

Aside from Aiden and Cole, other relationships feel forced or rushed. There are extended chapters in which Jodie forms a bond with groups of people, one with a group of homeless people and another with a Navaho family. While they're fine enough on their own, they don't impact the overall plot and come off as supplemental vignettes instead of relevant components of Jodie's life. There are also many areas where Jodie's supposed to care about a person she's interacting with, but the urgency is lost due to a lack of development.

It's hard to talk about the game's endings without spoiling anything, but it's a bit of a mess. It feels rushed and incomplete, throwing out subtle choices and cramming too many options into the end of the game. In fact, it's the opposite of having loose ends to tie up, as it takes chapters that concluded nicely and tries to work them back into the ending in a way that feels unnecessary. The significant choices are all back-loaded, making the majority of decisions made beforehand mostly meaningless. It's all very unsatisfying.

Heavy Rain took the cinematic flair Quantic Dream is known for and combined it with choices that mattered. Beyond: Two Souls

circles back to Indigo Prophecy's status as a paranormal thriller with undeveloped characters and little overall impact. It's hard not to wish things had gone differently. A stronger focus on character development, a tighter design in choices and consequence, and a more cohesive story would have gone a long way. After playing Heavy Rain, it seemed like Quantic Dream was heading in the right direction, but Beyond: Two Souls takes two big steps backward. Rating: 4.0 out of 10.


Disclosures: This game was obtained via retail purchase and reviewed on the PS3. Approximately 10 hours of play were devoted to the single-player mode, and the game was completed (three endings). No time was spent in the co-op mode.

Parents: According to the ESRB, this game contains blood, intense violence, sexual content, strong language, and the use of drugs and alcohol. There is violence against adults and children, including being able to choke the life out of people. As far as sexual content, there is no explicit nudity, but there are shower scenes were camera angles creativity hide anything inappropriate. There are other scenes of sexual content including a sexual proposition and attempted rape. The game does feature quite a bit of strong language. Drug and alcohol usage is seen or talked about at many points in the game, including one instance of underage drinking.

Deaf & Hard of Hearing: The entire game can be played without audio and all scenes are subtitled. Audio cues are not required, as the game uses visual cues along with any audio cues that are given.

I loved Heavy Rain until that one red herring at the end… you know, in the typewriter shop… that one scene killed the whole game for me.

Nice thoughtful review, Michael. I disagree with it almost 100%. It’s hard to talk about this without getting bogged down in the cinematic game thing, and how actual gameplay interferes with the story (the drama of a scene is lost when you fail the QTE six times), but I was surprised to hear you talk about the ‘challenge’ of the game. This wasn’t really what the game was about for me. I was much happier making simple choices and movements to move the game forward. I don’t think it enhanced The Walking Dead when you couldn’t locate the hotspot for… Read more »

I totally agree with you.

Believe it or not, Beyond made me appreciate Heavy Rain more.

In Heavy Rain you can die. There was more suspense because they could not rely on a supernatural being to throw a force field around you if you fail the QTE.

There’s more interactivity in the game world, even if it is just brushing your teeth or slipping on a banana peel. There were more choices that make a difference, such as who dies at the end.

I also liked Heavy Rain because there was no supernatural sh*t.

That 9 from GameSpot and the 8 from Polygon show that reviewers want to see the good in these “interactive games” or whatever Cage is trying to create. But the proof is in the gameplay and his games STILL fall to pieces underneath the nice voice acting and animations. Maybe do something smaller in scope that doesn’t involve such cheap Simon-says gameplay.

I skipped straight to the score and thought WTF?? The Last of US was a great game, then I realized that this was a review for Beyond. I see why Ellen Page is annoyed with The Last of Us.

I can totally understand wanting to see the good in these games, as I did. I loved Heavy Rain despite its problems, but this game was a step in the wrong direction. I think Quantic tried to make this game more accessible and instead took away most of what Heavy Rain did well.