Deceptively Good Despite its Flaws 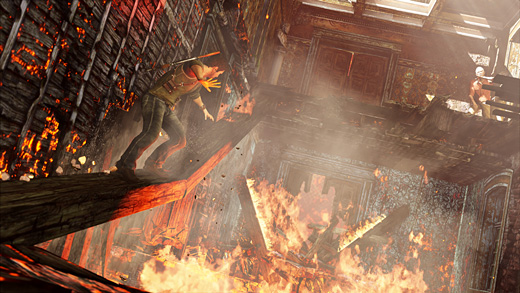 LOW Too many questions without answers, and a plot in search of a soul.

WTF Drake barely survives the desert, but is apparently hydrated enough to run and jump around like a monkey.

For those of us who didn't mind a splash of the cinematic in our games, 2009's Uncharted 2: Among Thieves was an absolute gem, blowing minds with its brilliant gameplay and garnering multiple awards in the process. Naturally, expectations and media hype have built steadily since a third title was announced late last year. However, the leap in quality between the original Uncharted (a solid game in its own right) and the sequel was so great that Naughty Dog most likely set the bar impossibly high for subsequent entries. Chances were always greater than not that Drake's Deception would disappoint its audience on some level—and that's exactly how I found the finished product: disappointing and brilliant, all at the same time.

In his third outing, Drake's journey takes him to several different locations—from a London bar to a capsized cruise liner, and finally to a lost city similar to the previous game's Shangri La. All of the locations are astonishingly beautiful, and the sense of motion that comes with the various setpiece events are once again the class of this genre. A horse-riding sequence late in the game is among the most exciting and stunning sequences I've ever witnessed in an action game.

While climbing ancient architecture is as entertaining and as fluid as ever, the combat feels stilted. Part of the reason for this is the new, (supposedly) improved melee mechanics on which too great an emphasis has been placed. While it's nice to see Naughty Dog taking a page from the more complex combat of, say, recent Batman and Assassin's Creed games, the melee tends to drag on, and frequent grapples are a nuisance. Too often, I got caught up in fights and grapples when I wanted to run for cover. Particularly frustrating is a fight animation that ends with Drake detonating an enemy's grenade while still strapped to his chest; if this animation triggers in a corner, the player is pretty much screwed.

It's also disappointing that Naughty Dog doesn't take more chances with the basic shooting sequences.  For instance, one level late in the game has players shooting at red-colored pillars in order to collapse stone structures on which enemies are standing. After two battles, this mechanic disappears entirely.  Numerous ziplines hint at shooting while sliding down them, but these sequences are automated. The one shooting element that seems to add some spice is a new "vertical" perspective borrowed from Capcom's Dark Void. It's a welcome break from fistfights and blindly tossing grenades with tiny blast radii. 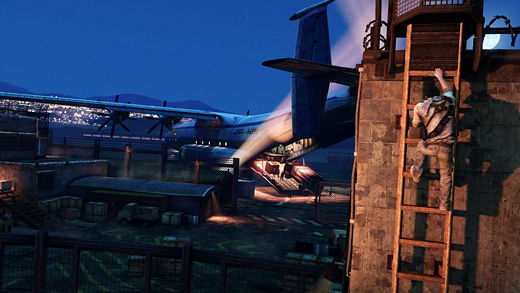 Unfortunately, the stick-to-cover button is unresponsive at times and won't work with surfaces that one would expect it to. Also, as with the previous game, stealth gameplay is uneven and enemies alternate between being omniscient and clueless about Drake's location in darkness. The puzzles are clever in their visual design, but are never terribly challenging. Pop-up hints can be turned off (I suggest doing so), and the devs have seen fit to never give players a chance to get stuck during a puzzle. If the solution isn't figured out after a minute or so, AI characters will chime in with the solution. It's as if Naughty Dog doesn't fully trust the audience's intelligence.

Storytelling, one of the defining traits of the Uncharted series, is similarly uninvolving. While the larger story arcs of the previous two games were rarely compelling, the games' key success was their moment-to-moment plot development. Characters were endearingly written and voiced, and the settings for Drake's adventures never felt cheap or out of place. Uncharted 2 in particular excelled, using what could have been in lesser hands a cliché love triangle to bring out the quiet idiosyncrasies of Drake and Elena's relationship. Players rooted for these characters, not because of what they did, but because of who they were.

The central relationship this time around is not Drake and Elena but rather Drake and de facto mentor Victor "Sully" Sullivan.  Naughty Dog seems to be gunning for the poignant father/son dynamic of Indiana Jones and Henry Jones, Sr., but neither the overall plot nor the dialogue indicates a problematic or imperiled relationship between Drake and Sully. In other words, the game seeks to project drama where there is absolutely none. There are also old flames, new friends, and new baddies, all of whom are well written but never integral to the events at hand.

Similarly, the set-pieces seem like they were read off an "Oh, wouldn't it be cool to have…" checklist rather than integrated into a single, coherent story. They're exciting, yes, but it all felt arbitrary when the game was over and I couldn't remember why I actually visited half of the locations. Adding insult to injury, several characters repeatedly question Drake as to why he's even bothering to embark on his quest. After playing through the game, I'm not sure Naughty Dog knows the answer.

If the campaign is a step in the wrong direction, Uncharted 3's excellent multiplayer is a large step forward. Cooperative play is built around three modes: one uses scaled-down campaign levels, another repeats the "Horde"-like mode of the previous game, and a third manages to combine the two. They're great diversions, but unlikely to steal much time away from the competitive multiplayer, which is the real star. Competition features the requisite assortment of leveling perks (all of which are thoughtfully designed) and modes, but what makes it shine are the exceptionally well designed maps. They're made to be elegantly balanced, with plenty of sniping points and hiding spots, and a few feature multiple, moving phases that remind me of the exhilarating, multi-tiered stages of Power Stone 2. Most impressively, the gameplay and maps practically demand teamwork, an aspect reinforced by a fun "buddy" system that makes players feel like they're part of a close-knit team even when playing with strangers.

Despite a few rough parts, the sum of Uncharted 3 is an excellent package that will make fans of the series proud. It's beautiful, exciting, and features outstanding multiplayer.  Players will get quite a game for their money, even if it's not the cohesive and momentous experience of Uncharted 2. Rating: 7.0 out of 10.

“It’s as if Naughty Dog doesn’t fully trust the audience’s intelligence.” Any downtime would hardly help to keep the cinematic experience so you have to keep the thing going. That’s imo important and simply right for what they want to offer the player. I can respect adventure players who wish to get challenging puzzles but it’s my main problem with the genre. Puzzling and usually get stuck pretty often, only in between get some story bits, feels detached, never homogeneous, never flowing. “Force” me to have fun. Constantly! For good puzzles i much rather play real puzzle games than ruining… Read more »