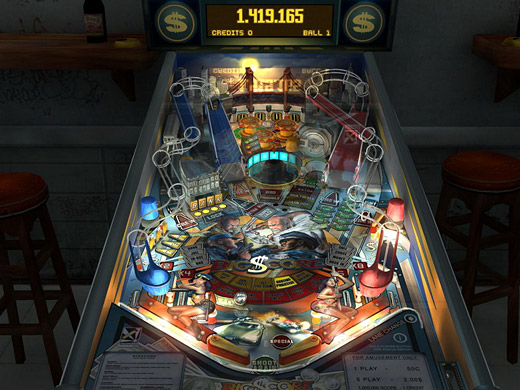 My new obsession is Technetium's painstakingly detailed pinball simulator, SlamIt Pinball: Big Score (shown above and available via Steam for a mere $5). The re-release of the Williams collection on PS3 and 360 was terrific. Zen's releases on those systems have been quite stellar as well. But they ain't no Big Score.

What Big Score lacks in variety (it is only one table, after all) it more than makes up for in authenticity. It isn't based on a real table, but it might as well be. Everything about the game oozes real pinball, and the team at Technetium has nailed pinball physics in a way that no other simulation has. The ball has a real heft to it; it is neither unnecessarily fast (I'm looking at you, FX Pinball) nor floaty (I'm looking at you, pretty much every PC pinball game in the '90s). And rendered in glorious 1680×1050 resolution, the table looks like you can practically reach out and smear the glass.

My fascination with Big Score has launched me into a pinball frenzy as of late, and I'm enjoying just about every pinball video game I can get my hands on… even Dream Pinball 3D for the PC and DS (not as bad as you'd think). I've been playing marathon sessions of The Gottlieb Collection for the PSP and Metroid Prime Pinball for the DS. And I've been doing just a little too much reminiscing about Galactic Pinball for that poor Nintendo Virtual Boy system I sold so very long ago.

I've even hunted down Atari Lynx emulation just for another chance to play Pinball Jam's recreation of the classic Elvira and the Party Monsters table.

Of course, this video pinball-mania makes me more than just a tad nostalgic about my experiences with real tables. Dr. Who. The Adam's Family. Last Action Hero. T2: Judgment Day. I was certainly a product of the early '90s, a time when names like Bally, Data East, and Stern were still relevant to the arcade… and arcades themselves were not quite dead. As an adolescent, these were the times I was most drawn to the arcade, not simply for the seeming miracle of Konami's outrageous 4-screen X-Men arcade cabinet, but for those glowing, clanking curiosities in the darkest recesses of the arcade.

I'm not sure what it is about pinball that has let it survive as a gameplay experience since the late 19th century (not counting its Bagatelle predecessor, whose origins can be tracked some several hundred years before). In many ways, pinball is the first mechanical game, but it has at its core only the "mechanics" of gravity and the titular ball and pins.

What I do know is that in the last thirty years pinball has become something entirely other than simple… a mad-scientist contraption not unlike a fully-formed board of Mouse Trap. With their myriad ramps, drop-slots, blinding lights, and electric cacophony of noises, the best pinball tables are the ones that make the player feel like a child opening a brand new chem set. Pinball is an act of curious chance, of experimentation, of exploration.

It is also an act of competition. Star Fire (1979), a shameless ripoff of Star Wars, was the first arcade game to allow for personalized high scores. I am unsure whether any electronic pinball table beat that game to the punch, but modern tables and simulations have certainly taken scoring to the next level. In particular, simulations on the PC and consoles allow for internet-wide sharing of scores. The aforementioned Big Score tracks high scores globally, posting the top five from around the world (complete with country of origin) on its website.

The local arcade has become global. But I'm still just that awkward adolescent boy, clanking away on the pinball machine in its darkest corner. A certain visceral quality to the machines has been lost in the translation to pixels and polygons, but Big Score represents a stark and sometimes shocking move into a new generation of simulation.