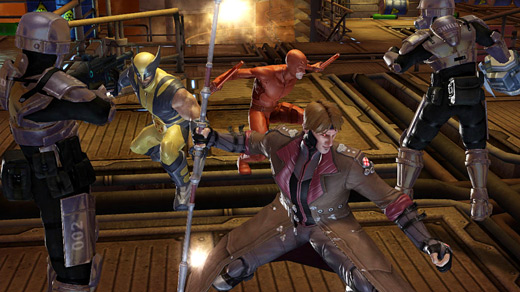 Like any good science fiction, the best comics are strong allegories that illuminate human nature in ways we find surprising, enlightening… and sometimes gut-wrenching. A particularly revealing comic storyline uses epic battles between heroes and villains, not to glorify violence in a simplistic manner, but to show that even the concept of heroism is a complex and often misleading thing. Heroes can be villains. Villains can be heroes. When it comes down to it, most characters, tenuously holding on to the convictions that define their identities, fall somewhere between the two.

Marvel's recent Civil War storyline may not have been ideal in the telling, but as an allegory for our post-9/11 surrender of freedoms (namely the Patriot Act), it was damn near sublime: Following an attack on New York City in retaliation for a "Secret War" started by superheroes and the cataclysmic detonation of a particularly explosive villain while being pursued by heroes, the government passes legislation requiring that all heroes register their secret identities, engage in official law enforcement training, and adhere to policy set forth by S.H.I.E.L.D.'s new leadership. On one side you have Iron Man, who reluctantly comes down on the side of the registration act because he can't see the political climate changing any time soon and wants the public to feel safe from "rogue" heroes. On the other side there's Captain America, who would rather fellow heroes keep their rights and freedoms than see them trampled in the name of panic. Captain America resists registration, is labeled a traitor, and goes on to lead other anti-registration heroes in an underground resistance movement that seeks sanctuary from former allies sent by S.H.I.E.L.D. to track them down. A war rages between the two sides that results in massive destruction and ends only when Captain America chooses to surrender rather than continue to put the public in danger to satisfy anti- and pro-registration convictions.

Comics featuring the Civil War storyline were published between 2006 and 2007, not long after George W. Bush signed a compromised Patriot Act re-authorization bill into effect despite widespread concern about its effect on civil liberties. With the previous five years of debate regarding security vs. rights fresh in the public's mind, the Civil War storyline reflected the angst of both viewpoints with stirring honesty, causing readers to see once-revered heroes like Iron Man and Spider-Man in a different light.

Interestingly, however, the game forces the player to choose a side for the central third of the game—a choice that determines which characters become available, which bosses (in this case, other superheroes) will be faced, and even which ending cinematic is shown. Thus, the player, too, becomes complicit in the actions depicted, and whether the player chooses to act for the law or for liberty, the end result is detrimental in-fighting. Personally, I found it to be quite a system shock to be tasked with taking down Iron Man, my all-time favorite comic book character… although I'll admit that these levels let me joyfully recall childhood fantasies of "Who would win in a fight between Hero X and Hero Y?"

Just as the original Civil War storyline was timely in its publication, its more interactive counterpart remains a pertinent indicator of the times. Though not intended by the game's designers, Marvel: Ultimate Alliance 2's retelling of the Civil War storyline resonates especially well given the current, heated debate over health care, wherein again we see one side that wants to keep freedoms suppressed in the name of fearmongering and another that simply reacts to scare tactics rather than putting out helpful information. Since health care, like the Patriot Act, affects all of us, we cannot help but take a stake in this battle… but many citizens feel distressed by the way both sides are waging their campaigns. In the end, the political parties will have battled, but it is most likely the public that will lose.

The critical reaction to Marvel: Ultimate Alliance 2 has been solid, albeit unspectacular. No matter one's feelings about the game's relationship to its genre or its predecessor, it's hard to argue with the subject matter's continued importance, and the fact that there is a game that allows you take a participatory stake in this kind of allegory makes it all the more impressive. I found the game mechanics to be pretty enjoyable to boot, but I'd argue that the key reason to play this game in 2009 is that, like the comics on which it is based (even harkening back to the original '60s storylines of The Uncanny X-Men), it has a very important lesson to tell.