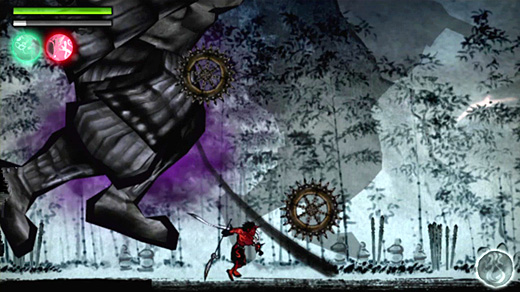 LOW Nothing else is.

Sumioni: Demon Arts is an interesting concept in search of gameplay. While it would seem developer Acquire (of Tenchu fame) was aiming for a mix of Kirby's Canvas Curse and the ultra-stylized Muramasa: The Demon Blade, what they came up with is a series of bite-sized levels that require little more input on the player's behalf than pushing right on the analog stick, swiping the touch screen, and spamming a single button.

Sumioni is about an "inkmaster" and a mysteriously sleepy red beast… and a big dog who may be the inkmaster's pupil… and an annoyingly positive female bird. I'd relay the entire plot, but honestly, the whole thing is told via confusing, poorly written, and slow-moving text crawls. From what I could gather, it's a bunch of nonsense that has players fighting an evil demon and his horde of chainsaw-equipped eyeball pagodas.

The aforementioned "interesting concept" on display here is the game's progression system: each level takes only a couple of minutes to complete, but the player's performance is judged using the kind of three-star system made popular by mobile games like Angry Birds. If a player's performance is strong enough, he or she can move on to an entirely separate branch of levels, like a platforming version of Outrun. So, while the game in its most direct form can be completed in roughly thirty minutes, skilled players can access additional levels that extend its life. When the player reaches one of six possible terminal stages, he or she is rewarded with a predictably confusing ending.

Unfortunately, no matter the path, the gameplay is woefully simplistic and altogether clunky. The player is given a basic attack, a rush move, and the ability to "paint" platforms using the Vita's touchscreen. Unlike Kirby's Canvas Curse, these painted platforms serve no use other than letting the player avoid enemies and charge the basic attack; they cannot be used to block enemy projectiles (which is a shame, since some bosses spit out projectile patterns that resemble bullet-hell shooters) or do anything else remotely creative. The player can also summon one of two assisting characters using touch-screen prompts, though there is little reason to do so outside of boss fights. All of this perpetual motion looks rather pretty given its basis in the the Japanese "sumi-e" style of art, but it doesn't provide the lasting impression of, say, Otogi.

Each level mercifully starts with an overview of the game's branching paths, so little guesswork is required as to when and where the player must put in a particularly strong, three-star effort. At the same time, this straightforward map is symbolic of just how little of the game surprises. Because star ratings are assessed based on completion time and damage dealt, gameplay boils down to avoiding a seemingly random assortment of foes using painted platforms, rushing to the end, and fighting either a bizarrely animated pagoda or demonic boss using a summon. Enemies, environments, and bosses are recycled ad nauseum, so no strategy is needed other than memorizing the quickest way to lay down paint lines without getting hit by projectiles.

That isn't to say reaching alternate paths is a breeze. Some of the deeper paths are stuffed with cheap-hitting enemies and a masochistic placement of stage-ending spikes and other nuisances. Due to the complete lack of variety or intelligent level design, progress is more of a chore than a challenge. Still, despite this frustration, I was able to unlock four of the six endings in a little under three hours. After that, there was no reason to go back and play. The story is bad, the endings are trite, and there is a nigh-criminal lack of substance underlying the unique progression system.

Perhaps if Sumioni: Demon Arts were priced as a PlayStation Mini in the range of $3-5 it would be worth looking into as a minor curiosity—a good idea hampered by lazy execution. As is, it's a shallow, irredeemable miscalculation not worth anything close to the $20 asking price. Rating: 3.0 out of 10.


Disclosures: This game was obtained via publisher and reviewed on the PlayStation Vita. Approximately 3 hours were devoted to the single-player mode and the game was completed four times with roughly two-thirds of stages and four of six endings unlocked. There are no multiplayer modes.

Parents: According to the ESRB, this game contains mild language and fantasy violence. I didn't notice the language, personally, and nothing in the game is so violent or frightening that it should rattle youngsters. The game might even resemble Samurai Jack to indiscriminating young eyes, but be forewarned: it contains none of the charm or substance.

Deaf & Hard of Hearing Gamers: Cutscenes are composed of stills accompanied by slow-moving text and there is no speech or events that require subtitles/cues during gameplay.