Although the original Sony PlayStation Portable (PSP) had its share of problems and never lived up to its full potential, Sony is betting that they can learn from the mistakes of the past, and they're giving the handheld market another shot. On February 22, both the 3G and Wi-Fi versions of Sony's new PlayStation Vita were finally available for purchase at retail. The new Vita is an attractive piece of kit that seems to be a step ahead of the PSP in every aspect, and the launch software seems to offer a number of promising titles—some have gone so far as to say that it may be the strongest launch lineup of any system, ever.

GameCritics is proud to offer one of two impression pieces covering the PS Vita. The first is the one you are reading and it's by Matt Kaplan (commonly known as one of the biggest PSP fans on the planet). Matt has been putting his Vita through its paces and evaluating every element and gives his thoughts on the shiny new black hardware.

In the accompanying piece, Michael A. Cunningham, lifelong gamer and fountain of wisdom currently on loan from RPGamer.com, gives his thoughts on some of the Vita launch titles. Michael has been burning through a stack of titles, spending between one and three hours with each.

To be clear, these are not final, scored reviews, they're thoughts and impressions from extremely sharp gamers meant to give a little guidance and share some knowledge.

Some of you have already taken the plunge and purchased a Vita and some games. If you have we'd love to hear what you thought of the system and the launch titles. (Please leave a comment below.) 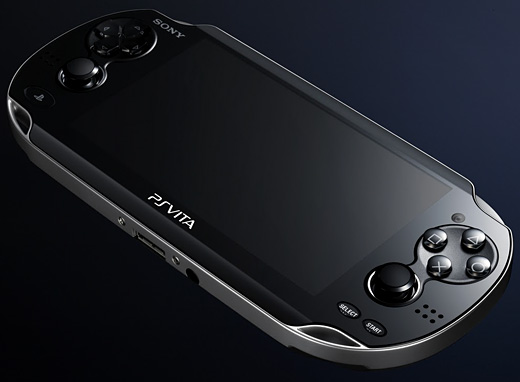 To say that I've been eagerly awaiting Sony's successor to the PlayStation Portable would be a gross understatement. I've owned five different PSP units and have loved them all dearly. Some of my favorite games of this past generation have been PSP titles, including gems like Jeanne D'Arc, Crush, Patapon, and LocoRoco. So, when the PlayStation Vita was first announced in January 2011, I naturally began to salivate over the prospect of backwards compatibility with my enormous digital PSP collection, two analog sticks, an OLED touch-screen, and graphics approaching vaunted PlayStation 3 (PS3) levels. Later, when I first saw screenshots for games like Uncharted: Golden Abyss, I found myself positively weak-kneed.

Here I am one year later, PS Vita in hand, ready to render my predictably hype-laden verdict. Coming from the world's biggest PSP fan, this should be a slam dunk, right?

The Vita is very much the successor to the PSP in form factor and build quality. It possesses the signature long and glossy jet-black frame, which, like its predecessor, attracts fingerprints and is rather difficult to stuff into your jeans pocket. It's a significantly weighted and polished machine that lets you know you can pound on buttons and the analog sticks without breaking them, yet one drop onto a hard surface is likely to forfeit your entire $250 investment. This also means it's not the world's lightest handheld device, as it is significantly heavier than the average e-reader or smartphone, but it's by no means unwieldy.

Aside from the dual analog sticks, the first major difference you'll notice is how small the buttons are. They are tiny, perhaps even tinier than the PSP Go's. The PS, Select, and Start buttons are particularly uncomfortable to press, and you can't even hit the lower part of the D-pad or the X button without touching the nearby analog sticks. Luckily, I've had a chance to test out the D-pad, analog sticks, and shoulder and face buttons with a variety of game genres, and I'm happy to report that the physical controls are generally responsive and comfortable for long periods of use. The D-pad in particular, cramped though it may be, is impressively smooth for fighting games like Ultimate Marvel vs. Capcom 3. It may very well be the best D-pad on a portable since the Neo Geo Pocket's clicky, gated thumbstick.

Gone is the PSP 1000-3000 series' UMD drive, replaced by a small game card slot. If you have a large UMD collection, I suggest holding onto your PSP, as Sony has no plans to build an add-on drive for the Vita or to allow American customers to exchange discs for online purchase vouchers. Vita game cards are incredibly slight, smaller than 3DS cards and roughly the thinness of SD cards. Trust me when I say that a Vita owner's first investment should be a case to hold multiple games; they are small enough to lose forever in the nebulous void between couch cushions.

The Vita has no usable internal hard drive space, so every system also comes with a memory card slot. The proprietary memory cards required for game saves and downloads have been the source of much ire in the gaming community; most folks think Sony should be packing the $20 4GB card with every system and I tend to agree with them. These memory cards are inordinately expensive given their size, and the fact that most games require something that is not sold with the console is inexcusable. If you do plan on picking up a Vita, either browse to find a bundle or be aware that the $250 "starting" price for the system is actually more like $270.

The Vita's user interface is a disappointment. I have no idea why Sony decided to replace the dead-simple Cross Media Bar used on PS3 and PSP with something akin to an ugly Android phone UI, and what's here is ungainly. There are far too many program icons on the main screen, several of which cannot be consolidated or erased. While you can move them around between virtual pages, you'll inevitably have to rearrange them once game installation data inconveniently plops the icon for the game you just loaded up into the last spot of the last page. In other words, it's a mess.

The lack of logical organization here points to a more crucial interface problem: the online suite is not nearly as intuitive or cohesive as Sony would have you believe.

There's Near, a 3G and Wi-Fi program for finding out what people around your location are playing and for leaving/collecting virtual gifts, but as with the 3DS's Street Pass system, its utility is questionable at best and confusing at worst. You also have group messaging and party chat, which for some bizarre reason aren't part of the same program, and there's also a separate program to compare trophies. Why Sony didn't just combine all of these things into a "Community" program with a single icon is beyond me.

What's worse, the settings are never where you expect to find them, and I find it puzzling that while you can change a few chat settings and the brightness by simply holding down the PS button, you need to exit what you're doing, go to the "Settings" icon, press "Start" from the Settings page, and then go into "Network Settings" and accompanying sub-menus just to turn off Wi-Fi, Bluetooth, or 3G. These are things that battery-conscious misers should be able to access with the toggling of a switch or push of a button, not through a slog over to menu screens.

Speaking of battery life, it's just as bad as you've heard… which is to say it's the norm in this power-hungry age of high tech portable gadgetry. I used up the entire battery playing Uncharted: Golden Abyss in less than three hours, and that's with brightness at a little over 50% (3G and Bluetooth off, Wi-Fi on). Granted, Uncharted is one of the more taxing launch titles, but I wouldn't expect to get more than four hours of game time with the Vita no matter the title. The third-party Nyko Power Grip accessory, which promises up to three times the normal battery life, can't arrive fast enough.

Not all of the changes made to Sony's handheld formula are bad. On the contrary, the Vita is by and large successful where it counts the most.

The 5-inch OLED touch-screen is absolutely stunning, affording some of the sharpest and most vibrant graphics on any handheld device. Lens flares in Wipeout burn your eyes, shimmering ledges in Uncharted dance off the screen, and Rayman Origins turns into a zoomable cartoon masterpiece. By comparison, the 3DS is wearing two fuzzy picture tube televisions. Portable versions of home consoles have been released in the past (e.g., the NEC TurboExpress and Sega Nomad), but none have ever come as close to matching their most powerful contemporaries' graphics the way the Vita crams near-PS3 power and high-def resolution into a handheld. 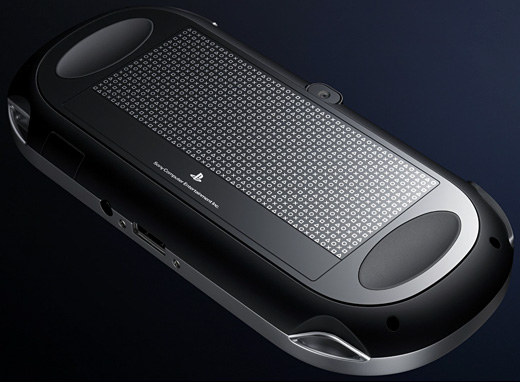 Capacitive touch functionality is responsive and the large rear touch panel, though not always intuitively implemented in games such as Little Deviants, is surprisingly accurate. In fact, I have to commend Sony: the rear touch screen may turn out to be one of the most important additions to portable gaming, as it's an excellent way to make gaming tactile without obscuring one's view of the screen. Of course, that will depend on how it is utilized in the future, but the potential is there. (The rear touch-screen also makes for a potentially nifty substitute for missing L2 and R2 shoulder buttons.)

The aforementioned dual analog sticks are perhaps the most important additions, and already the software is proving that there is no substitute for a second analog stick when it comes to changing an in-game camera's perspective or firing weapons in a twin-stick shooter. The sticks are rather short and have a little bit of wiggle in their dead zone, but they are gracefully resistant when nudged, and quite frankly, anything would be an improvement over the PSP's thumb-shredding analog nub.

Of course, the question of whether the Vita is worth buying—particularly at launch—has a lot to do with the software and the kinds of gaming experiences Vita's combination of power and interface trickery can provide. For my part, I have completed Little Deviants and I'm currently making my way through seven of the other launch titles, but so far the games have been a mix of overwhelmingly familiar fun and muddled attempts to show off the touch control schemes.

So here's the verdict: Wait.

Yes, you read that correctly. I said wait.

I'm having a blast with the Vita and everyone I know who picked one up early or was given a review unit absolutely adores the thing, but that doesn't mean the Vita makes for an incredible value at $250. It's certainly cheaper than many people estimated when it was first announced, but that's still a lot of money for a console at a time when many families are tightening their budgets. To be worth that money right off the bat, the Vita would have to be a completely refreshing user experience with some killer-app launch software. Sadly, that's just not the case.

The hardware, though impressive from a technical standpoint, offers nothing truly new to the handheld space except the extra analog stick. The rear touch-pad may be a crucial selling point in the future, but that will depend on how well it's utilized. In fact, I hate to say this, but Sony may have been better off excising touch and motion controls entirely in order to release the Vita at a lower price point. That said, I'll eat my words if (or when) a new, exciting property comes out that uses these control schemes in an innovative way. The forthcoming Gravity Rush may be that game, but that won't be on store shelves until a few months from now.

For the moment, the Vita is a very expensive way to have fun with solid, yet unsurprising titles. Gamers may want to wait for an inevitable price drop, but I would certainly recommend another look when more Vita-specific titles are launched in the coming months.

(See what Michael A. Cunningham had to say about some of the PS Vita launch software.)